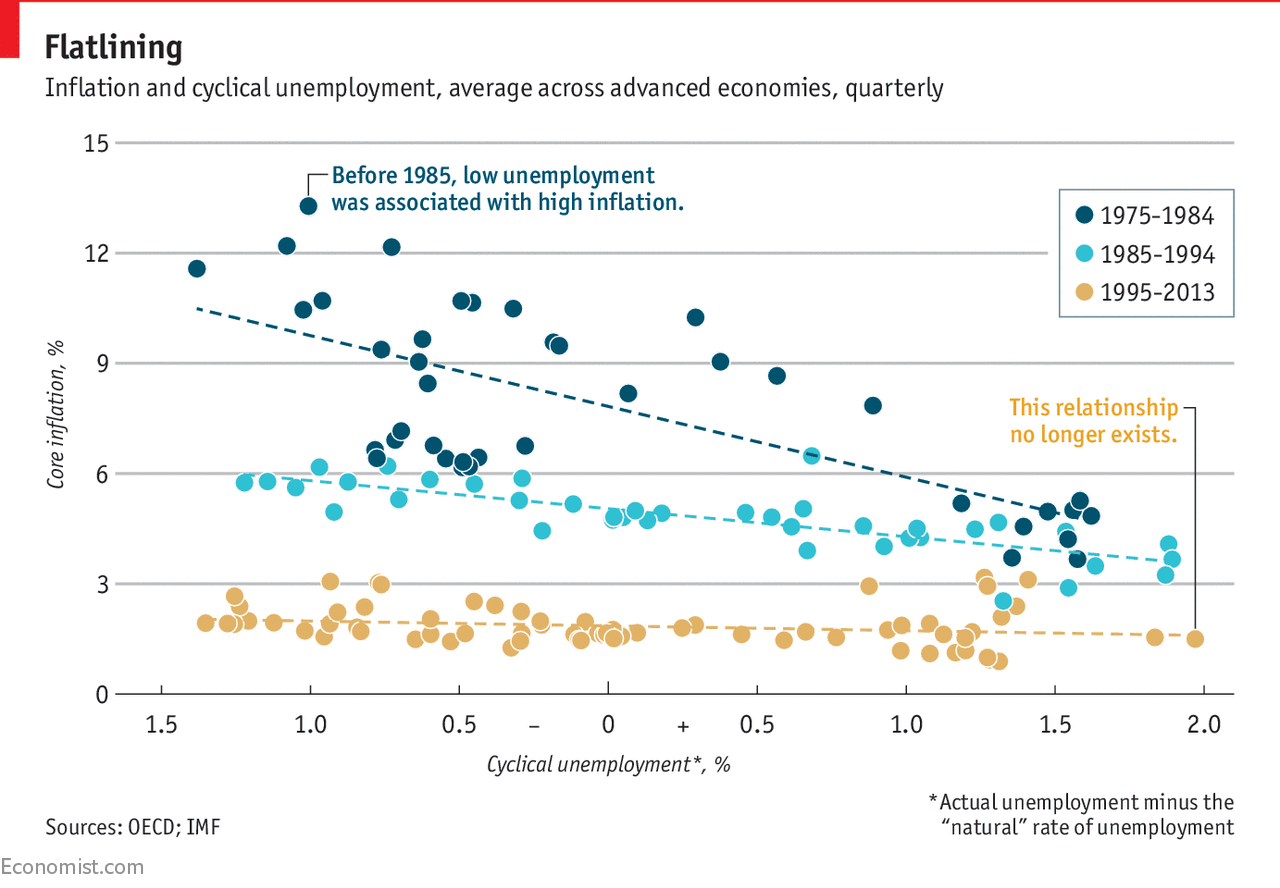 After a comprehensive study of many decades of data from the British economy, economist A.W. Phillips published a paper on his discovery of an inverse relationship between rates of unemployment and changes in inflation. The graph below is directly from the original publication of Phillips’ study and clearly depicts the negative correlation he observed.

A couple of years later, following independent studies that had reached similar conclusions, economists Paul Samuelson and Robert Solow officially established the inverse relationship that is known today as the Phillips curve. This economic advance led to the formal acknowledgment of the tradeoff between unemployment and the rates of inflation. This Phillips curve was initially thought to represent a stable and structural relationship. But, economists would later conclude that the model was not reflective of the long run behaviors of an economy. Therefore, the inverse relationship first depicted by Phillips is commonly regarded as the short run Phillips curve.

An important component of the relationship that the Phillips curve depicts is the concept of tradeoffs. We face tradeoffs all the time in our everyday lives. Whether deciding how to spend our time or what to eat for our next meal, we are constantly giving up one option in exchange for another. Economic trade-offs are very similar to those we face in our daily lives. The Phillips curve is the perfect example of this idea of tradeoffs.

Movements Along the Curve

Shifts of the Curve

Monetarists like Ed Phelps and Milton Friedman spearheaded the rejection of the Phillips curve. They concluded that the negative relationship presented by the Phillips curve was only applicable in the short run. In the long run, however, it was determined that there was no such tradeoff between unemployment and inflation. The long run Phillips curve, instead, was established to be a vertical line, with the economy at the natural rate of unemployment for any level of inflation. The natural rate of unemployment is the rate at which the business cycle is at equilibrium, meaning no fluctuations up or down, and is equal to the sum of the frictional and structural unemployment rates.

Since its conception, the Phillips curve and the relationship that it presents seem to have undergone constant examination. In fact, in recent years, economists like Larry Summers have argued that the curve is flatlining and may be breaking down altogether. As for now, however, the consensus is that the curve holds. The relationship it presents can be very helpful in understanding the current state of the economy.