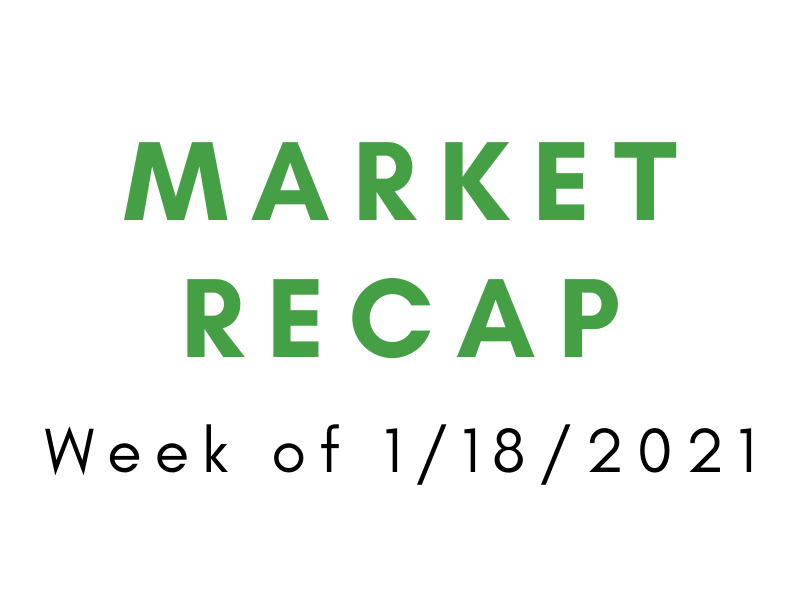 Earlier this month, people really started to doubt the strength of the rally in tech stocks. Typically, when something goes up a lot in a short period of time (ahem, Bitcoin), lots of skepticism about that growth starts to arise. As we’ve said in this newsletter before, it’s not a good idea to think everything can go up forever. This week, that belief was proven wrong, as the NASDAQ, where all the big tech stocks trade, rose 4.19% this week to end at a record closing price on Friday. The NASDAQ is up 5.08% for the year so far. The S&P 500 finished 1.94% higher for the week and up 2.27% since the beginning of the year.

The reason behind this market actions seems to be the renewed belief in tech’s rise, especially big tech. Apple and Facebook both rose over 9% for the week. Microsoft and Amazon both rose over 6%. Additionally, investors had a better idea of how Biden’s administration would approach stimulus after he took office on a historic day. Biden’s plan, which costs $1.9 billion, received lots of criticism from Republicans, making it clear that passing that level of stimulus would be hard.

COVID-19 is nearing 100 million cases worldwide, as there are currently 98.9 million cases as I write this. Over 2.12 million people have died worldwide, with 417K of them in the US. The US itself has over 25 million cases. In California, Los Angeles County accounts for 1/3 of the state’s entire cases, with 1/3 of the county’s residents having COVID themselves. The UK is battling a new variant that researchers think could be more deadly.

Despite the vaccine’s rollout, the virus continues to spread. Part of the reason behind the slow vaccine rollout is that states can’t directly buy from the manufacturers like Pfizer and Moderna. Instead, they have to wait for them to be distributed by the federal government due to the emergency use authorization of these vaccines back in December. President Biden has said he will administer 100 million doses of the vaccine in his first 100 days. Only time will tell if he can accomplish this.

3.  What About the Rest of the World?

So far in 2021, the rest of the world has been doing better than the US. With China’s and South Korea’s stock market having already risen 12.8% and 10% year-to-date, investors have become more bullish on the international growth story. Part of this story has to do with the fact that investors are simply looking outside of the US for opportunities. With the unprecedented stimulus, the dollar has been weakening as a result of a larger supply, causing inflation. This has caused many investors to seek out investments in other countries whose money supplies haven’t been as drastically affected.

Another reason for this turn to the rest of the world has been Biden’s stance on global economic relations. In sharp contrast to the Trump administration, Biden wants the US to return to the world and rejoin various international agreements, like the Paris Climate Accords. However, Biden will still carry over the toughness on China from the previous administration. Chinese stocks, especially technology stocks, have been riding higher on beliefs that they will compete significantly with US tech companies. The international story is one that we should all be looking at in 2021.