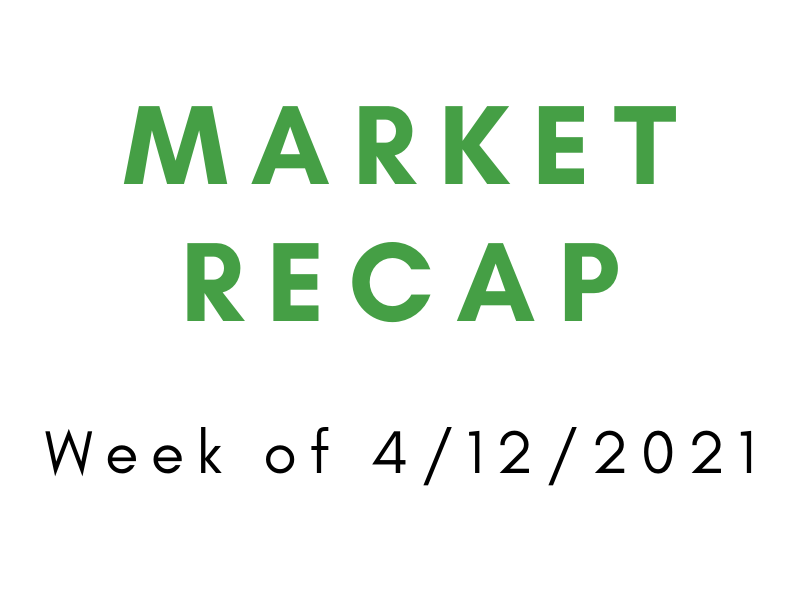 The market had a robust week as bullish investors added fuel to their fire. All major indexes finished around 1% higher than the past week, with the Dow Jones topping 34,000 points for the first time in history. Like mothers when they see organic products, consumers have flocked back to retail stores at an unprecedented rate, splurging as their new stimulus checks arrive.

Additionally, a “crude awakening” occurred for oil as its price per barrel jumped 6% to close above $63 on the week primarily due to increased demand. Retail sales soared 10% compared to February, exceeding most estimates and kicking off the start of earnings season. This week, earnings season kicked off with JP Morgan and other banks reporting first-quarter results that beat expectations.

When a strong economic growth happens, it might create conditions “too good to be true”. There’s always a catch, and in this case, inflation is the catch of economic expansion. Though the Treasury yields are down from the highs, they are still up nearly a percent from the beginning of the year. Additionally, the CPI (Consumer Price Index), which measures inflation, continues to rise monthly.

Studies show that not only are children the main method the pandemic spreads but also now they can contract the virus more easily. Additionally, new COVID variants such as the dreaded B.1.1.7 variant are more potent and can cause worse symptoms for children. As this variant spreads, more and more children are being infected and hospitalized, especially in populations of children that aren’t able to be vaccinated.

To worsen the situation, in many countries and parts of the US, the supplies of the vaccine are not able to meet the demand, and the ability to create new vaccines is being exhausted. This could contribute to the uptrend of cases experienced in the past four weeks, this week the daily case average rose a startling 8%. This statistic is worrying for many epidemiologists as they expect a new spike in cases to occur, and this rising average might mean it’s worse than they expect.

3. Dogecoin to the Moon?

Dogecoin, a Wish-version of the Bitcoin created based on the Doge meme which gained popularity in 2013, is now drawing some serious attention. Defying all metrics and common sense, Dogecoin’s market cap is now $40 billion after the price rose 400% in the past week.

This rise, however, might be short-lived as Dogecoin’s history is full of wild volatility, similar to most cryptocurrencies. The infamous Reddit page, WallStreetBets, also has many fervent supporters of this meme coin. Dogecoin’s sudden rise just adds to the hype surrounding it as its traders become Dogecoin millionaires left and right.

Why is Dogecoin rising so rapidly? The recent listing of Coinbase, a virtual cryptocurrency exchange, has sparked more interest in cryptocurrency as most cryptocurrencies rallied hard Friday morning.

While this is happening, the enemies of WSB — traditional Wall Street investors — fear a bubble is forming. They believe the rise of cryptocurrency really has no fundamental merit, as no severe advancements or limits of supply have been instituted. Some investors even go as far as to say that the hype around these crypto coins will be their downfall, as investors only look to them to make a quick buck, and when the bubble bursts people will be left bag-holding.

Hyperloop and the Future of Transportation

India’s Future in the Post-COVID World