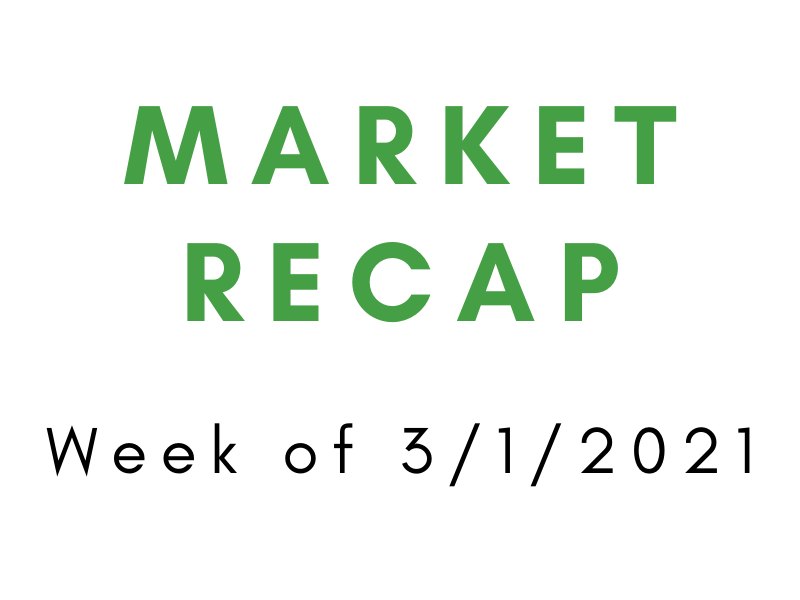 The romance that investors had been building with the tech sector since the beginning of the year hit its breaking point as investors realized how much it would cost to continue that relationship. Investors dumped tech stocks almost as hard as Mackenzie dumped Jeff (almost as hard, guys, almost). No more apparent was this than stocks like Tesla, which fell 11.48%, and Nvidia, which fell 9.14%. This breakup between the tech sector and investors led to a choppy week.

For the week, the Dow Jones rose 1.82%, the NASDAQ fell 2.06%, and the S&P 500 rose 0.81%. Investors who bet heavily on tech, such as ARK’s Cathie Wood, suffered large losses. The NASDAQ is now only up 0.25% for the year so far. Investors attribute this decline in stocks to the increase in the Treasury yield to a 13-month high of 1.60%. In comparison, in late September, the yield rate was around 0.66%, resulting in a startling rise of 142% since then, highlighting fears of higher interest rates and higher borrowing costs for companies. The big question is whether investors will get back into a loving and stable relationship, a volatile relationship, or stay broken up with the tech sector.

Next week, the U.S. The Bureau of Labor Statistics will release a remarkably important measurement of inflation: the Consumer Price Index (CPI). This is a measure of inflation for consumer goods and services.  The results of the CPI will allow investors to interpret numerous, significant topics including the US’s economic recovery from COVID and general inflation.

Johnson and Johnsons’ vaccine is now being distributed. This version of the vaccine is ultra-efficient, as it not only requires one dose for full immunity, but it doesn’t have to be stored in industrial coolers, common refrigerators are fine.  The fact that it only requires one dose is huge, especially in parts of the country where vaccine rollout has been restricted due to an ineffective supply.  Overall, around 16.3% of the US population is now vaccinated with at least one done.  This positive vaccine statistic, coupled with the fact that healthcare professionals are becoming better at preventing the spread (seen by an 80% decline in nursing facility cases), provides a promising outlook for what’s to come.

Bolstering what would have been a severe down week in the market was the jobs market numbers for February. The economy produced around 380,000 news jobs last month, almost twice the total number economists expected. Leisure, the sector that COVID hit the hardest, has now made significant progress in returning to normalcy. The majority of the new jobs were produced in this sector. That’s a great sign for other sectors still hit hard by the pandemic nearly a whole year ago.

As the market passes pre-COVID highs in a record time, after falling 25%, many investors question whether we are peaking. While most people peak in high school, the beginning of this year involved the market peaking every day. If it is peaking, then is a correction coming? Many factors have influenced market corrections in the past (correction = 10+% decline), but none more so than monetary policy.  To limit inflation, the Federal Reserve often implements policies that temper the economy. Though no overly-restrictive policies have been implemented, the 10-year benchmark interest rates have risen, a sign that investors expect inflation to rise along with subsequent future Fed action.

Another possible Fed move that could induce a pullback might be a decrease in the economic stimulus.  In 2013, the market fell 6% in response to a decrease in stimulus, this was called the “taper tantrum”.  Another factor impacting the future market is its inherent value, which is presently overvalued by many measures. Though this doesn’t mean the market will come down anytime soon, in the past, market overvaluation combined with stricter monetary policy has resulted in market crashes. Regardless of a market pullback, or bullish continuation, one simple investing rule must always be paramount: don’t invest money you can’t afford to lose.