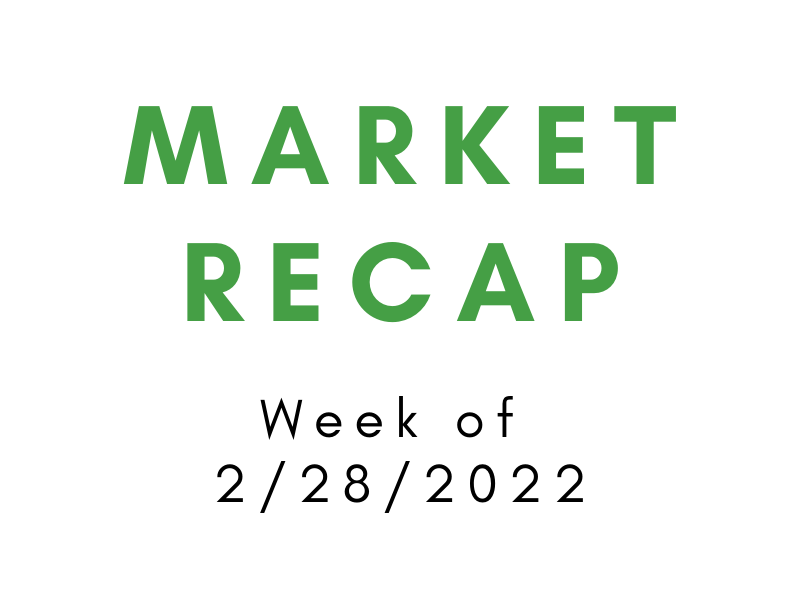 The past week summarized in three headlines.

1. Further Down We Go

The major U.S. indexes all fell with the S&P 500 and Dow Jones falling more than 1% and the NASDAQ falling more than 3% on the week. However, these losses were nothing like what occurred in Europe where some countries’ indices fell by more than 10%. On the other hand, energy prices surged as oil rocketed upwards due to the expansion of the Russian invasion into Ukraine.

Oil surged through the $100 line like a running back charging through the defense and hit a high of $116 on the week. This raised the U.S. average oil price at the pump to $4.00 a gallon, the highest it’s been since 2003.

With uncertainty in Europe halting economic growth, inflation retreated a bit on the week, shown by falls in bond yield rates. Though earnings reports came back strong, in the shortest month of the year, the market fell around 3% following a loss of 5.7% in January. February also marked the first time in 16 months the S&P 500 hasn’t posted a record daily closing high.

Oil prices spiked to $115 a barrel on Friday, reaching a high of $116.51 on the day. These spikes have largely been provoked by the recent Russian invasion of Ukraine. Additionally, the fear that the U.S. might sanction Russian exports and prevent Russian oil from being imported has caused prices to skyrocket.

In San Francisco, prices have soared to the point where average prices at the pump are $5. As the Russian conflict continues, another factor might contribute to raising prices. Spring and summer travel, especially as COVID begins to lessen in its impact, will increase the oil demand. This can only mean one thing: the price of oil is likely to rise.

Additionally, if you’ve noticed in the past oil prices rise in the summer, you wouldn’t be mistaken. Government regulation forces oil companies to switch to a more environmentally friendly oil blend in the summer, raising prices 5 to 15 cents per gallon. Even Elon Musk, the pioneer of electric vehicles for Tesla, stated on his Twitter the US needs to increase the oil supply.

3. The Demise of Oil

Just like Stephen Curry changed the NBA with his 3-point shooting, or Einstein revolutionized physics, the advent of EVs will likely change the oil industry forever. This new decade looks like the decade of the electric vehicles as battery prices continue to lower and EVs continue to get more affordable. By today’s standards, many experts estimate that by 2040, the price of a long-range EV will be down to $22,000.

For an industry that’s been a major part of US history since the 1800s, and has produced countless billionaires and massive companies, EVs could turn the automobile industry on its side. When EVs become cheaper and more affordable than their combustion-engine counterparts, the oil industry will be shaken up. This can only happen if battery technology continues to improve, as batteries make up ⅓ of the total price of the car.

However, passenger vehicles only account for 44% of the U.S.’s total oil demand, meaning the oil market won’t be completely down for the count. But, the electric vehicle industry will take a significant bite out of the market. It’s not a matter of if, but when.

This week’s edition is all about oil. Its rise to astronomical highs due to the invasion of Ukraine and its potential lows as electric vehicles become more and more common. As the Russian invasion of Ukraine tanks markets across the globe, oil and other commodities have reached record highs as their supply is questioned.