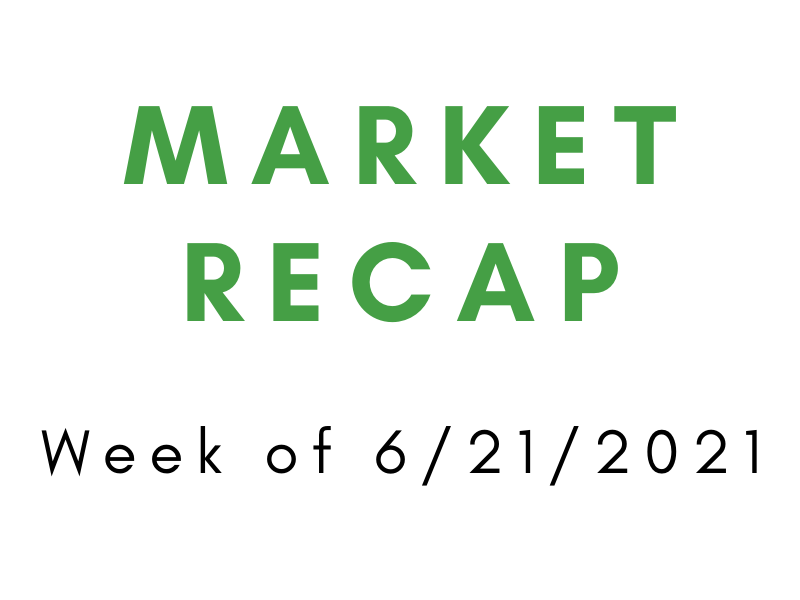 1. Zooming and Booming: A Rebound Week

After a dismal past week most investors would like to forget, all three major indexes recovered and approached their highs. The Dow increased 3.5% while the Nasdaq rose 2.3% with software and tech leading the recovery. The S&P 500 rose 2.7%, reaching yet another all-time high. So far, 25% of the trading days this year have seen the S&P break a new all-time high, a percentage that can rival Ben Simmons’ shooting. Alongside this record week, the earnings outlook for the mid-July season is turning increasingly positive as many companies in the S&P issued positive guidance. Guidance is basically what companies expect their earnings reports to show.

In other promising news, President Biden and a group of bipartisan senators agreed on an infrastructure plan worth $1 trillion to improve the nation’s housing and physical infrastructure. He now has to move the plan through Congress where he will no doubt face Republican opposition. Like the Bucks losing to the Hawks and then demolishing them, Bitcoin has experienced significant volatility in the past week. Bitcoin tumbled below the $30,000 mark once this week, declining by more than half from its high in April. This decline stems from investor’s worries from regulations in China and concerns of a crypto bubble (more on this later).

2. Rich Bernstein and the Rise of Oil

Rich Bernstein, the CEO, and CIO of an investment firm with over $10 billion in assets believes that oil is a neglected bull market. Bernstein, who regularly appears in financial media, believes that the commodity bull market has untapped potential, saying that oil “has been in a bull market, and you never hear anything about it. People don’t care.” As oil hit $74 per barrel this week, Bernstein is looking more and more correct.

Like Luka Doncic and Trae Young, oil is looking more like a hot commodity rather than a killer of the environment shunned on social media. A few things have caused this rise in value for oil, most of which can contribute to the basic laws of supply and demand. The US is experiencing a surprising jump in demand while crude oil inventories are decreasing, leading to a price increase. Though OPEC has indicated that they would increase supply strategically, many analysts think the demand will eat up the increase in supply and the price would remain unchanged. Regardless, Bernstein believes that growth investors will be buying energy, materials, and industrials because that’s where he believes growth will be.

3. China versus Crypto: Matchup of the Decade?

Bernstein also warns that crypto is a bubble and investors will be left holding the bag when the bubble eventually pops. If you’ve heard your friends talking about Dogecoin or seen an influencer promoting crypto you’ve never heard of, you wouldn’t be alone. However, if your friends are holding crypto or planning on buying it, Bernstein says that your portfolio could suffer in the next few years as the hype dies down. Whether or not this will be true is to be seen, but the hype sure is real right now. Kim Kardashian West, an influencer with no ties to crypto, was seen posting an ad for an altcoin on her Instagram story to her nearly 230 million followers.

This week, cryptocurrency took a nosedive on unsettling news in China. The Chinese government, acting as overbearing parents to overly hyper children, started a crackdown on mining. In general, the Chinese government has expressed they don’t like currency they can’t control. Therefore, decentralized currencies don’t really appeal to them. The whole crypto world was on edge to see which miners were forced to abandon their work. This nervous attitude caused doubt, and, as we all know, doubt causes selling, and selling causes prices to drop.

However, for the US, this China enforcement might be good news as it could cause “mining migration.” Think of mining migration as asking one parent for candy, and if they say no, asking the other parent who might hand you a more appetizing result. In essence, Chinese miners are migrating to Texas for its power grid and political environment, both favoring the creation of a crypto-mining industry. Overall, Bitcoin, Ethereum, and other altcoins are down due to uncertainties in China.

The market bounced back after a disappointing week, driven by positive political news and more optimistic earnings expectations. Profits may lie in the oil market, as Rich Bernstein believes it’s growth potential is being ignored by most investors. Crypto versus Chinese regulation may be the matchup of the year as crypto-investors, miners, and Chinese political interests are all vying to get rid of each other.