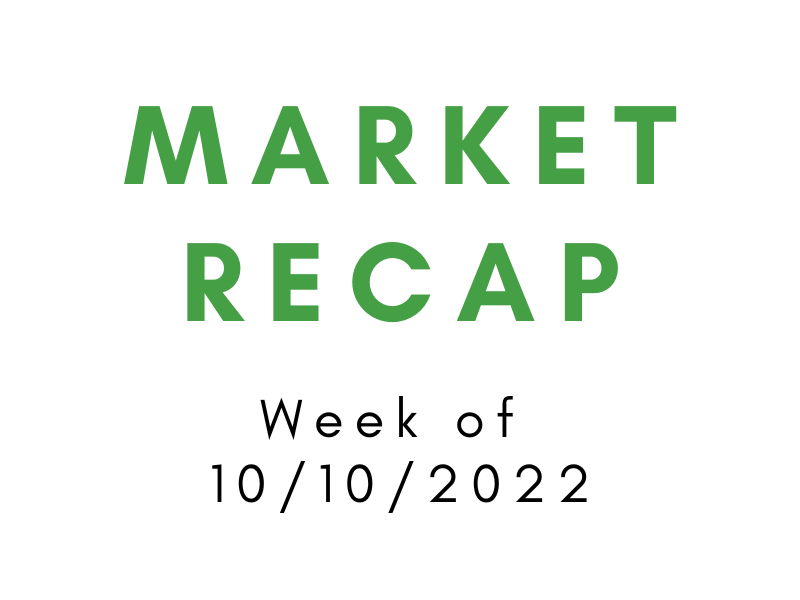 After breaking the market’s streak of losses, this week couldn’t repeat the positive gains of the last week. Like a rollercoaster that reached its height, the market has rattled down once more as the S&P 500 dropped 1.5% and the NASDAQ slid 3.1% by the end of Friday. Despite further increases in interest rates by the Federal Reserve, the CPI (Consumer Price Index) released on Thursday showed that inflation hasn’t slowed down at all.

Besides food and gas prices, measures of core inflation showed a startling jump up to 6.6%, surprising many analysts and fueling the nightmares of traders around the country. Even worse, for the first time since the 2008 crash, Treasury yields have eclipsed 4.00%. To put this into perspective, they were below 1.5% at the start of this year.

Oil dropped 7% this week, after being up nearly 17% last week due to a cut in supply by OPEC. The poor global economic output also weighed down oil prices among other energy sources.

Oil demand has increased while supply has fallen, causing an inevitable rise in price for millions of Americans and people around the globe. In a decision further shaking up the prices at the pump, the oil cartel OPEC decided to cut supply. As you can imagine, this decision was met with outrage as prices were already through the roof, suffocating many parts of the world economy.

OPEC met these concerns with the claim that they cut supply due to “uncertainties in the global market and oil outlook.” When this supply cut was instituted, the US started to consider economic sanctions. Aptly named NOPEC, the bill titled “No Oil Produced Economic Cartel” allows the US to punish countries artificially changing the price of oil. The US could also simply restrict their exports of refined petroleum goods, hurting the world economy. Either way, OPEC’s decision to cut supply will trickle down to your local gas station and in your bank account.

If the movement of the market confuses you, you’re not alone. After a terrible CPI report this Thursday, the market rebounded off its lows and ended the day 2.6% in the green. Just two days before, Bloomberg put out an article that said a hotter-than-expected CPI report could result in a drop of 5%. However, the hotter-than-expected CPI report resulted in a market increase. The conclusion analysts came up with was simple: the market was so low there was only one way to go. After it hit its bottom, the market could only go up and it rebounded hard from its bottom. The volatility of the market on Thursday was extreme, and a large amount of trading volume probably made the sharp upturn possible as well.

The market had a down week again, for the seventh time in the last 9 weeks. Inflation metrics show that the Federal Reserve’s rate increase hasn’t helped significantly. Oil prices increased last week as OPEC cut supply, to the dismay of car owners everywhere. After the CPI revealed increasing inflation, markets rose to the perplexity of investors everywhere.