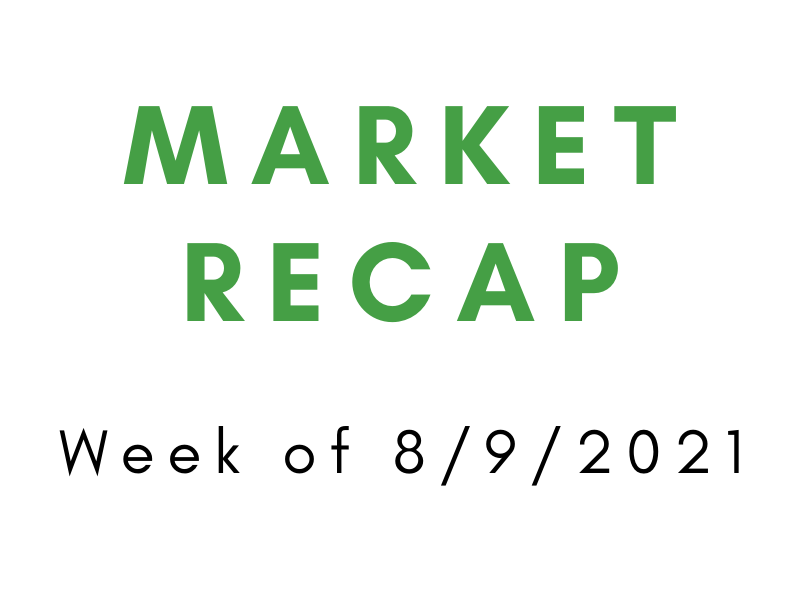 The S&P 500 and Dow rose slightly, taking a small step forward and extending their recent gains. The NASDAQ took a small step back, posting a miniature decline for the week. Though investors’ confidence has been shaken by the Delta Variant, the market is still progressing as this Friday marked the S&P 500 index’s 48th record closing high of this year.

During the pandemic, job security was at an all-time low as many workers found themselves out of a job. However, nearly 1.5 years from the first time we all heard the word “COVID”, the labor market is almost back to normal. Unemployment claims fell for the third week in a row to 375,000, nearing pre-COVID numbers.

In a move that broke the internet and got everyone talking, Messi left FC Barcelona for PSG. Similarly, the new $1.1 trillion and $3.5 trillion infrastructure bills are sure to get everyone talking in the House, where weeks of discussion should follow. Though earnings have been outstanding this quarter, many companies are already casting doubt upon their future performance. And while we should live in the moment, companies rarely do. Many auto and tech companies believe that rising material costs, wages, and supply chain disruptions will reduce margins and cut into profit.

Jeremy Grantham, the legendary investor who is the chief investment strategist for his eponymous firm, believes the stock and crypto markets are in a bubble. And he doesn’t believe it’s a run-of-the-mill correction with a 5-10% setback — he thinks it will crash worse than the dot-com bubble. Though Grantham received hate online from market bulls, Grantham has called many crashes in the past. He is known for calling the 1989 Japanese asset-price bubble, the 2000 tech bubble, and even the 2008 real-estate bubble. He believes that there is a strong possibility that bubbles will pop in the fall. Some of the factors he lists that could cause the burst could be interest rates, inflation, labor, commodity prices, COVID, and the most important category of all: “everything else that is unexpected.”

Jim Cramer, one of the most polarizing personalities in the investing world, can turn a single stock upside with one word: sell! In this case, his opinion aligns with Grantham in the fact that he believes the market is reaching a near-term peak. On his CNBC show, “Mad Money,” he broke down the analysis of the legendary Tom DeMark. His conclusion was along the lines of a significant top forming in the S&P 500 and NASDAQ with a strong pullback looking imminent. Looking at the market, an upward trend has been established but with marginal gains each week. Like Grantham, DeMark believes that something other than a garden-variety drop will occur. If anyone could accurately time the market they would be billionaires. But, like life, the market is unpredictable, and even technical analysis fails.

The semiconductor shortage is getting out of hand as it’s beginning to spiral out of control. Bloomberg just broke the news that it can take more than 20 weeks for Nvidia or AMD to get these valuable silicon chips once they’ve been ordered. This shortage is hurting more than your next-door neighbor wanting to build a PC. Ford just delayed Mach-E orders by 6 weeks due to the shortage.

Chants of “Bitcoin to the moon!” are back as cryptocurrency is staging a comeback that has seen Bitcoin up 50% from its lows in the $30,000. Unlike crypto, oil has fallen from its highs of $75 a barrel and is now down to $68. This is in part to lower forecasted demand in the future. The US housing market is still on a roll heading into the Fall months where it has historically slowed down.

In almost every corner of the U.S., home prices surged in the second quarter and are over the average home price in 2006 before the crash. With the Delta Variant in the news, it’ll be no surprise that COVID cases have been on the rise for one week shy of two months. They are now significantly above the first spike in cases and are approaching the midpoint of the second, larger spike in January of this year.

Taking you back to January of this year, nostalgia sets in when you think of the series of events surrounding the spectacle that was the WSB takeover. Flashing forward to now, AMC and GME are both significantly higher than their price pre-Reddit “attack.” Both stocks are over 500% higher than they were when the year started.

Investors tiptoe forward and back as the market traded in a relatively quiet week with marginal gains and losses. The labor market seems to be recovering well and is approaching pre-pandemic numbers much to the satisfaction of the unemployed. Grantham, a legendary investor, describes where he believes the market is going (spoiler: it’s not pleasant). Cramer discusses the technical analysis of Tom DeMark and how he thinks the market is at its peak. Semiconductors continue to have a shortage, home prices still rise, and meme stocks are still high.