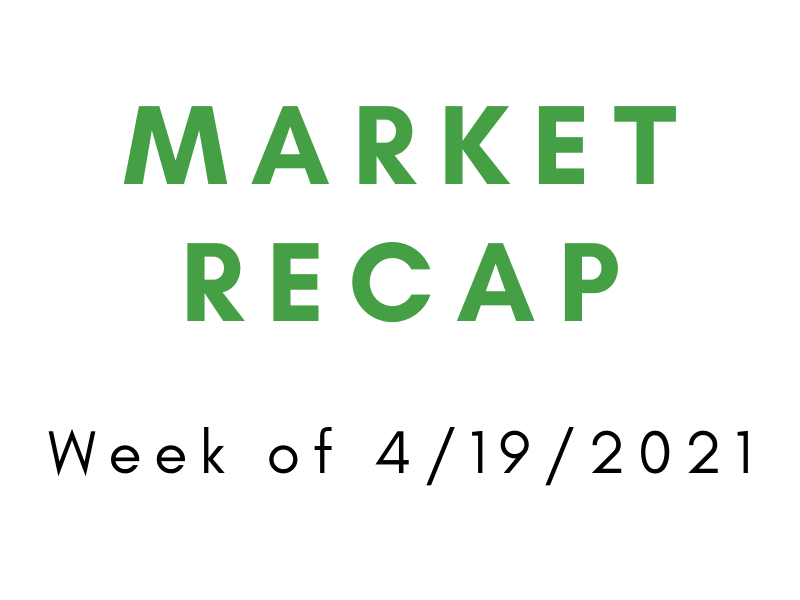 Investors’ feelings toward the market this week were more mixed than our feelings about John Walker after that finale of The Falcon and the Winter Soldier. Investors couldn’t make up their mind on what mattered more between Biden’s proposal to sharply increase the capital gains tax or the strong earnings performance of companies this quarter.

All three major US indexes finished the week with modest losses, breaking a 3-week streak of positive weekly gains that led to all-time highs. Though the total losses were minor, the S&P 500 dropped over 1% in an hour on Thursday after the news of Biden’s capital gains tax proposal released. In contrast to the Biden news that triggered investors to sell shares, the housing market soared — single-family home sales jumped 20% last month.

Bitcoin and other cryptocurrencies had an unusual week of volatility as Bitcoin dropped below $50,000 for the first on Friday after reaching a peak of over $60k in the week prior. In the coming weeks, we’ll know more about GDP as well as Federal Reserve sentiment. Both could have a significant effect on the market.

Biden’s tax proposals may have a silver lining. The last time the taxes on the wealthy were increased, the market experienced a growth of 28% despite the increased pressures on investors. But who knows?

2. Crisis Averted in US Only

After a small spike in cases during the last few weeks, the daily average of cases decreased 10%, comforting news for many investors and epidemiologists alike. To pile onto the good news, a CDC study found that mRNA vaccines such as the Pfizer and Moderna type reduce the risk of infection by 80%, after only one shot!

In other vaccine news, the US lifted their pause on the administration of the J&J vaccine, which is great news for communities where getting people to come for second doses on time is difficult. A brief intervention in the J&J vaccine showed that the cases of blood clotting were rare and were likely a result of a pre-existing condition. Though hospitalizations continue to increase, many scientists believe this is just the after-effect of the brief increase in cases.

In the US, everything is happy and hopeful, but in other countries, like India, COVID-19 cases are spiking and the health system is crumbling.  New reports are coming out that the cases reported in India are only a third of the real values. Anyone following the developments in India will realize that the country is on the verge of a large medical crisis.

Asset bubbles — the realization all bullish investors hate and try not to think about. They occur when the price of an asset, stock, sector, etc. rises above its true value due to high demand. In this case, it looks very possible that “Reddit Stocks”, including NFTs, cryptocurrencies, and other stocks (GME, AMC) are experiencing a bubble.

As darlings of the market and the headliner of financial news in the past few months, these assets have experienced exponential, and likely unsustainable gains. In the overall market, assets are already overvalued, and like most good things, the bull market has to end. Though the transition into a bear market might be gradual, the bubbles formed in “Reddit assets” are likely to burst and leave investors holding the bag. Regardless of these bubbles forming and bursting, the show must go on, and the market will recover or maintain its course.