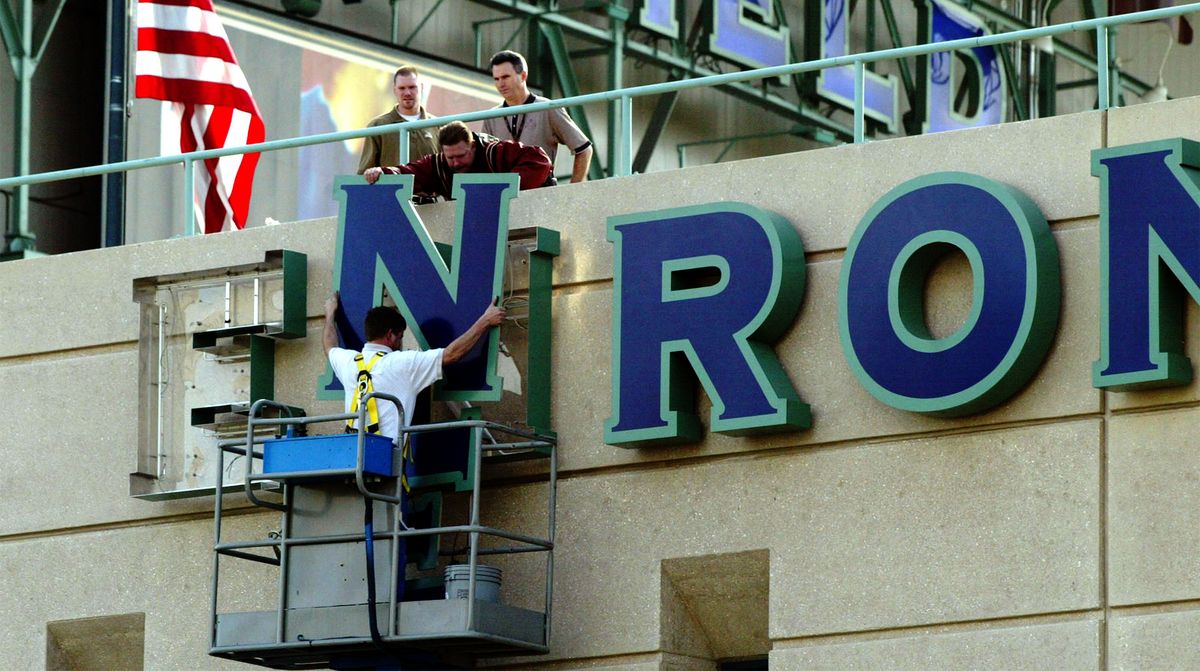 In Fall 2000, Enron was booming. Its stock hit a new peak price of $90.56, and the USA’s 7th largest corporation garnered praise for its innovative and ambitious projects. Fortune magazine had just named Enron “America’s Most Innovative Company” for the fifth consecutive year. But just over a year later, Enron stock was worth mere pennies, and the company was bankrupt. What happened?

Enron was formed in 1985 as a merger between two energy companies. CEO Kenneth Lay headed the new organization. An early omen of things to come occurred in 1987, when it was unveiled that two Enron Oil traders were manipulating records and gambling far beyond their limits. Instead of disciplining the traders, Lay told them, “Please keep making us millions”. Two months later, Lay stated that he was “shocked” when the traders nearly bankrupted Enron.

The company quickly rebounded, though. Enron flourished (or so it appeared) throughout the 1990s. The firm took advantage of US energy deregulation and expanded operations overseas. Especially during the Dotcom Boom (1995-2001), when internet stocks were reaching preposterous levels, Enron’s stock boomed. The energy company even unveiled EnronOnline, the world’s first “online stock market for commodity products”.

It’s All A Fugazi

In the early 1990s, Ken Lay hired Jeffrey Skilling, a former McKinsey & Company consultant. Under Skilling, Enron adopted a new accounting policy called “mark-to-market”. This allowed Enron to book expected future profits from any deal (whatever Enron executives said profits would be) as actual profit the day a contract was signed, no matter whether money actually came in the door. A notable example is a power plant in India, a project on which Enron lost billions. However, Enron executives were paid out million-dollar bonuses for profits that never arrived.

When even mark-to-market couldn’t hide Enron’s growing losses, Enron Chief Financial Officer, Andy Fastow, came up with a new scheme. To keep up the guise of profitability, Fastow began to create so-called “off-the-books corporations”. Instead of taking losses on unprofitable projects, Enron would simply transfer those projects to these other corporations where they remained hidden. Thus, mountains of toxic assets and debt were hidden from investors and regulators. While Enron’s losses mounted, its stock price kept going up.

By 2001, the Dotcom Bubble was over. Investors were looking at companies more skeptically. In Spring, a Fortune magazine article pointed out that no one seemed to know how exactly Enron made money. As questions mounted, Enron’s share price dropped. Because Enron’s “off-the-books corporations” were backed by Enron stock, a falling stock price meant that billions of dollars of debt suddenly came due.

On December 2, Enron’s house of cards collapsed, and the company declared bankruptcy. At the time, Enron’s bankruptcy was the largest corporate bankruptcy in American history. 20,000 employees lost their jobs and $1.2 billion in retirement funds, and retirees lost $2 billion in pension funds. Meanwhile, top Enron executives were paid $55 million in bonuses. In total, 21 people across various firms were convicted in the scandal, including Enron CFO Andy Fastow (sentenced to six years in prison) and ex-CEO Jeffrey Skilling (sentenced to 24 years).

Should You Buy The Dip?

Data Stocks: The Future of the Modern Market

The Impact of the CHIPS Act