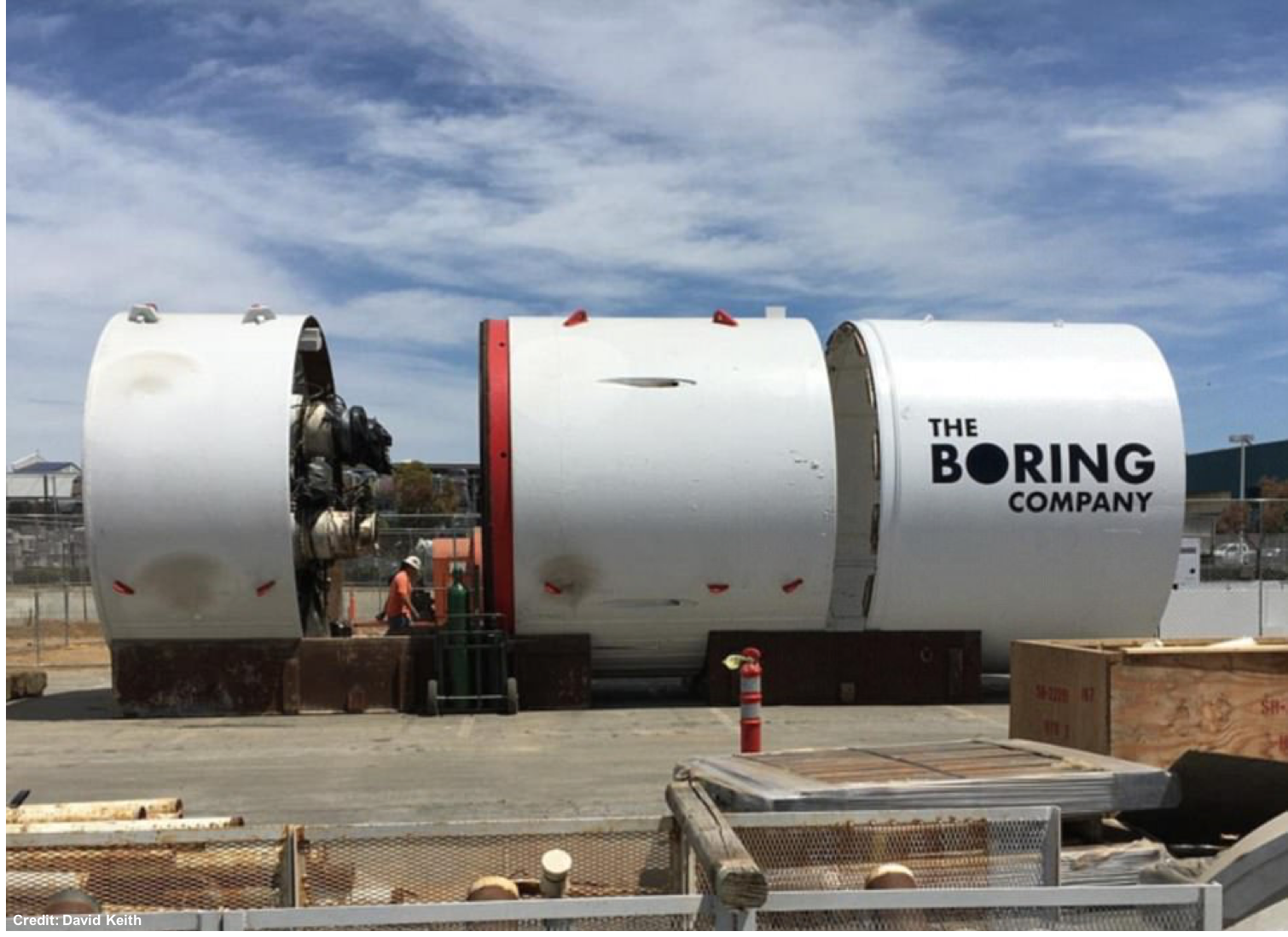 Have you ever been frustrated out of your mind by traffic that seems to last forever? Well, it’s not just in your head, you do spend an insane amount of time in traffic. How much time exactly? Try 54 hours each year. Yup, that’s more than two days spent in traffic. That number goes right up to 83 hours on average for those living in the US’s most congested cities. You’re not the only one who thinks this is a ridiculous amount of time to waste at a standstill. Elon Musk, CEO of Tesla and SpaceX, just about had it while stuck in traffic. But quite unlike most of us, he sort of decided to do something about it.

It was the 16th of December 2016 when Elon Musk got held up in one of LA’s infamous traffic jams. Infuriated, the business magnate and engineer took to Twitter to vent. “Traffic is driving me nuts,” he tweeted. “Am going to build a tunnel boring machine and just start digging…”. Just over an hour later, he shared another tweet, “It shall be called ‘The Boring Company'”.

We all come up with crazy ideas when stuck in traffic. Elon’s idea was one that was so crazy, it just might work. Especially considering that he is a billionaire who has some of the brightest engineers working for him.

Traffic is a Pain

Traffic is a big issue, especially in big cities. And as cities continue to grow, they are going to get more and more crowded. Because there’s a limit to just how many roads can be built, growing cities means more road congestion. Unless something is done about it. Enter, The Boring Company. This company was created with one goal in mind – improving traffic. The only practical way to reduce the amount of congestion on roads is to reduce dependence on roads. Elon and the folks at The Boring Company figured that to do this, transportation has to become 3D. Which would mean creating “roads” in the sky or underground.

The Boring Company of course, chose underground. Tunnels are safer than flying cars and you don’t have to worry as much about the weather when driving beneath the ground. So the company set on a mission to build a large honeycomb-like network of tunnels so we can finally say goodbye to wasting so many hours in traffic.

On the surface, The Boring Company’s mission to build underground roads may seem not-so-spectacular and maybe even unoriginal. Tunnels have been in existence for almost two hundred years after all. But Elon Musk wasn’t planning on building any ordinary tunnels. Like with every project he sets out on, the business magnate and engineer added his characteristic innovative touch to the Boring Company’s goals. Tunneling may seem like an obvious solution to the problem of traffic congestions. But, a project like this hasn’t been undertaken before because tunnels cost a lot of money to dig.

With the technology and methods that are typically used, tunneling can cost up to $1 billion for a single mile. In addition, it could take up to 10 weeks for that one mile to be completed. So, for The Boring Company’s plan to be feasible, it had to find a way to reduce the cost of tunneling as well as the amount of time it takes. And they were able to do just that. By some ingenious methods such as tripling the power of the standard tunnel-boring machine, making the machine automated so it doesn’t have to rely on human operators, and installing the tunnels reinforcing segments simultaneously instead of having to stop mining every five feet, the company has been able to achieve a tunnel-boring speed of over one mile per week.

The Boring Company has chosen to name their underground transportation system “Loop”. In Loop, passengers are transported in Autonomous Electric Vehicles (such as the Tesla Models S, 3, and X) through Main Artery Tunnels at an incredible speed of up to 150 miles per hour. That’s about nine times faster than a subway train. But in fact, The Boring Company has no plans to be compared with the subway system. According to them, the Loop is more like an underground highway than a subway. For one, because stations can be as small as two parking spaces, they can easily be built anywhere – from residential areas to bustling business districts. This would mean that passengers in the Loop can travel directly to their final destinations without having to make several stops as in the case of a subway system.

Another goal is to make transportation through these tunnels cheaper than what public transportation currently costs. For this to happen and for the tunnel network to expand into and cover major cities around the world, the cost of tunneling has to be reduced drastically. With the current costs of up to $1 billion per mile, The Boring Company’s plans are basically impossible to accomplish. To have a shot at making its traffic-solving mission a reality, the company would have to reduce the cost of tunneling to at least one-tenth of what it costs now. And in a show of indisputable genius and innovation, the company has done just that and more, building its first one-mile-long demo tunnel at a cost of just $10 million.

The Boring Company was able to pull off this feat by some simple, yet deeply insightful adjustments. For one, they’ve reduced the diameter of tunnels from about 28 feet, which is the standard width of a single lane, to 12 feet and have decided to maintain this diameter for all projects to avoid the costs of having to make adjustments with each new project.

Instead of throwing away the dirt that is excavated during the tunnel construction as is normally done, The Boring Company repurposes it. The normal practice of transporting the dirt off site for disposal is not just slow. It’s also super expensive and often comes to about 15% of the cost of tunneling. This process of dirt disposal also isn’t the best for the environment. The Boring Company instead uses the dirt to build bricks and pavers. These are either sold or given away for free for affordable housing projects. The Boring Company could also potentially use some of the dirt as part of the lining for the tunnel itself. In theory, the bricks alone could actually pay for the tunnel construction. What’s more, the process is environmentally sustainable, very durable, and the bricks are incredibly affordable at just 10 cents each.

Another feature that is helping Boring cut costs is that the Loop tunnels are designed to be all electric and compatible only with Autonomous Electric Vehicles (AEV’s). This way, the tunnel is zero-emissions. This means that the company won’t have to spend money on air handling systems for carbon monoxide, carbon dioxide and other pollutants in exhaust fumes. Instead, scrubbers and other simpler air-purification systems can be used, radically reducing costs.

Even though it started off solely to fix traffic issues, The Boring Company isn’t just about transportation anymore. According to Steve Davis, the president of The Boring Company, they get about 5-20 calls weekly from other companies who want utility tunnels built. So currently, the company offers five products: a utility tunnel, pedestrian tunnel, freight tunnel, a bare tunnel, and of course, the Loop.

Apart from the test tunnel which the company dug starting from the parking lot of the SpaceX headquarters in Hawthorne, California, The Boring Company has completed one major project in Las Vegas underneath the Las Vegas Convention Center. The Vegas Loop is made up of two one-mile tunnels to shuttle visitors underneath the expansive convention center. Usually, it takes about 15 minutes to walk from one end to the other. But, with the loop, passengers can make the journey in just about two minutes. There are projections for expansion along the Las Vegas Strip, reaching McCarran International Airport, Allegiant Stadium, downtown Las Vegas, and eventually, the city of Los Angeles.

The Boring Company began as a part of SpaceX until it separated in early 2018, with Elon Musk owning more than 90%. Even though he owns most of the company and tweets about it a lot, Elon has said he only puts in about 2-3% of his time into the company. His major focus is still on Tesla and SpaceX. In fact, he once described The Boring Company as a “hobby company” which actually started out as a joke. However, it definitely isn’t a joke anymore and is making huge strides in revolutionizing transportation. Regardless, The Boring Company has a lot of hurdles to cross on its path to dealing with traffic for good.