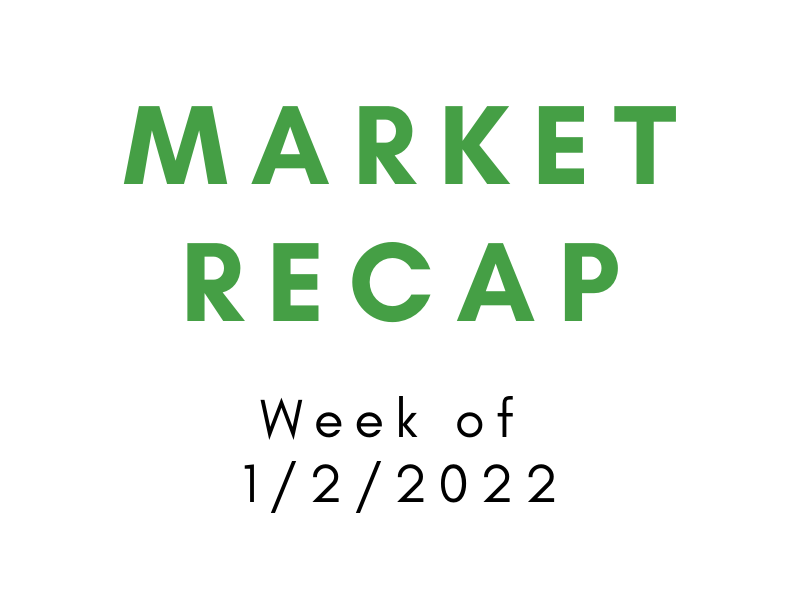 This past week summarized in 3 short headlines.

1. Rough Start to the Year

Investors’ love affair with the market got off to a rocky start in the New Year as each of the three major U.S. indexes fell. The Dow Jones wasn’t affected nearly as much by the shaky start as the NASDAQ and S&P 500, as they only dropped 0.2%. On the other hand, the S&P 500 fell 1.8% and the tech-heavy NASDAQ fell a whopping 4.5% on the week. The NASDAQ was impacted so severely due to its tech-centric focus combined with the anticipation for rising interest rates in the future.

In more troubling news, yield rates have spiked to over 1.8%, the first time at this mark since January 2020 at the height of the pandemic. The main cause of the market losses was the Fed Reserve’s Wednesday meeting. The minutes of the meeting showed deep concern for rising inflation and the accelerated time for raising interest rates this year, possibly as soon as March. The reduction of these interest rates would harm many companies traded in the market, especially those companies that are valued by what the market believes they can accomplish in the future. In the NBA Draft, it’s referred to as potential, and the stocks with the most potential are frequently high-growth tech companies.

The holidays were packed with joy, cheer, and potentially the Omicron variant for many families as the numbers of cases have skyrocketed. While the case count skyrocketed, so did many blue-chip stocks, especially larger tech companies. Investors reunited with their families and spread joy throughout the market as the so-called “Santa Claus Rally” helped investors end the year on a high note. Many investors are wondering if Santa Claus is real as the gift he left them for Christmas turned a bearish end of the year into a New Year with what seemed like bullish momentum.

Historically, the gains experienced during this rally (last 5 trading days of the year) have been held. The theories behind this rally are usually centered on optimism for the new year, increased holiday shopping, and institutional investors settling their investments before the holidays. During this rally, trading volume is markedly higher and larger price swings have been known to occur. This Santa Claus rally also is considered the first two trading days of this new year, however, the first days were anything but a rally. With the Fed news being released, it was more like Santa gifted coal to unlucky investors.

3. Ray Dalio on Inflation and the Future

Ray Dalio, the founder of the world’s largest hedge fund, the famous Bridgewater, is warning the Fed’s hands are tied up with rising inflation and that inflation will stick around. Dalio tells investors to avoid holding cash as their money will just decrease in value with this predicted inflation. He thinks many people look at savings as the safest investment but don’t factor in inflation-adjusted return.

Citing monetary inflation — the creation of a lot of money and credit — Dalio also warns that the higher inflation rates aren’t transitory. Dalio’s most recent book shares fundamental principles for investing, and in particular, he shares that he looks in the rearview mirror to see what’s ahead. In less complicated terms, it’s hard to know where you’re headed without knowing where you came from.

Dalio also shares his opinion on several important events and factors determining the future of the stock market and economy. For example, he believes the internal conflict between left and right, rich and poor, and political division are producing a level of conflict that has serious implications on the future from tax policy to capitalistic decisions. On the other hand, he cites the rise of China as a competing superpower to be a substantial factor in the future economy. He warns that a war with China would be disastrous as many of our products start in China or have some parts manufactured overseas.

The year didn’t start off how investors planned it, but they still have a year to turn it around. However, the rising inflation which has caused the drops has investors like Ray Dalio worried. He believes that this inflation isn’t transitory and will stick around. The Santa Rally is an end of the year rally that continues into the New Year and normally gives good gains to investors.