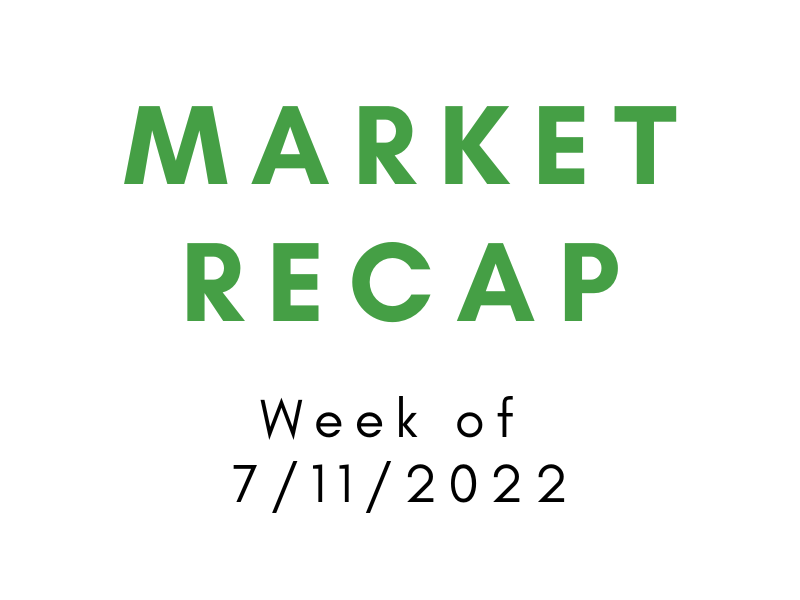 After a rally on the last day of trading due to a strong monthly sales report, weekly losses were minimized. However, the market took another setback this week with all three major U.S. indexes recording small losses. This makes it the 12th negative week out of the last 15, a losing streak that’s left many investors questioning when the bottom will come.

After rising to 8.6% last month, many investors hoped the CPI, a measure of inflation, would come down this month. Unfortunately, no relief came for these hopefuls as inflation soared and the CPI jumped to 9.1% for the month of June. Despite inflation, retail sales increased 1.0% in June, slightly above expectations even with consumer sentiment low. However, adjusting for inflation which was 1.3% relatively, sales were slightly negative.

With the US annual inflation rate now over 9%, the Federal Reserve is under a lot of pressure to accept a new interest-raising agreement. The higher the interest rates are raised, the more the market will be negatively affected, as investors are more and more likely to pull their money out of the market.

As earnings season approaches rapidly, positive or negative earnings could serve as a major catalyst for the market shortly. In the last few weeks, the market has been on a rollercoaster ride, up and down at a moment’s notice. This is largely due to the frequent and often incorrect predictions made about upcoming Federal Reserve decisions on rate hikes.

On the other hand, as earnings season arrives, investors will turn their attention away from the Federal Reserve and to companies’ performance in the 2nd quarter. Though this might seem positive for investors, many analysts predict that earnings will be a letdown as supply-chain shortages and inflation cut into companies’ sales and profits.

On the flip side, expectations might be so low that if the results aren’t bad as analysts assume, the market might see some positive movement. As mortgage rates also explode, investors will be keeping a close eye on housing data as well.

Netflix and ads are two words you’d never think you’d hear in the same sentence. Spoiler alert for those of you with Netflix subscriptions: Netflix is incorporating ads into their platform now. These ads will be for a lower tier of Netflix that costs less than your current subscription plans.

This decision comes after several price increases to their basic subscription plan and a first quarter that saw them lose subscribers for the first time in over a decade. To display these ads, Netflix is partnering with Microsoft, an unlikely underdog in the world of advertising when names like Google were involved in the decision. After losing 200,000 subscribers in the first quarter and likely another 2 million in this quarter, Netflix needs a new way to appeal to customers that might not be looking to dish out a pretty penny for a streaming service.

This serves as a warning to other up-and-coming streaming services as more competition is on the horizon. Netflix’s stock tanked after their negative subscriber reports, but they hope their new ad-tier of service will help boost their numbers and regain an even larger foothold in the streaming service industry.

The market took a tumble this week as inflation soared and investors speculated about the Fed Reserve making decisions about increasing rates. As earnings season rolls around the corner, a company’s performance could serve as a major catalyst for its performance as analysts expect supply-chain shortages and inflation to eat into profits. Netflix lost subscribers for the first time in over a decade last quarter; it’s bringing ads to the table now.