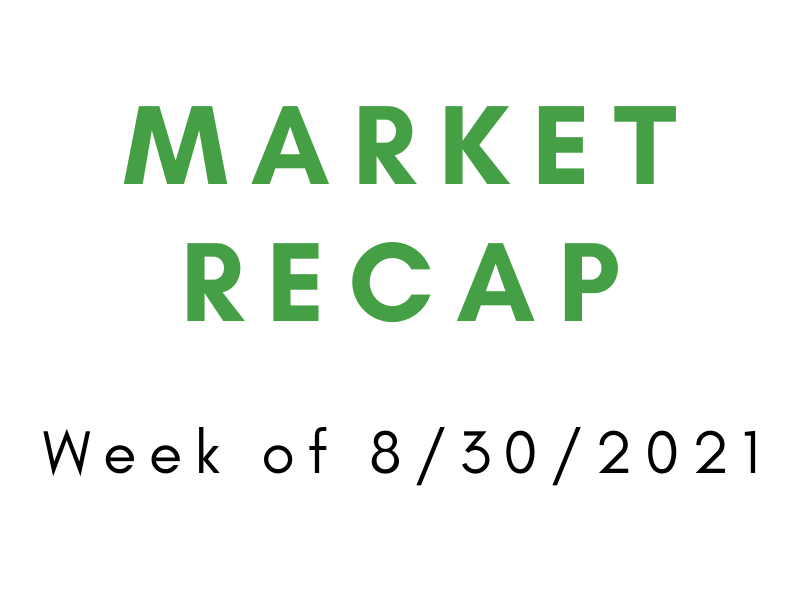 The major U.S. stock indexes traded within a narrow margin the whole week with the S&P 500 posting a gain for the second week in the row. Like last week, the NASDAQ outperformed its counterparts as it gained 1.6% on the week while the Dow Jones lost 0.2%. For the seventh month in a row, the S&P 500 recorded a positive gain. Despite having a mid-month decline, the index scraped its way back to a net gain of 3% on the month.

Some investors might even call this period of the market a “pullback drought”. To put the market’s stability in perspective, investors haven’t experienced a pullback of more than 5% since October 2020. However, this might change as the economy’s confidence has fallen due to the Delta Variant’s continual spread. Daily cases have skyrocketed as mask mandates are loosened and students return to school.

Surveys show that consumer confidence fell in August to the lowest level in six months, leading to a slowdown in retail company earnings for the third quarter. Unlike the Lakers and Nets adding veteran players out of nowhere, the U.S. payroll growth fell out of nowhere. 1 million jobs were expected to be created but the market disappointed as only 235,000 jobs were generated.

After the seventh month of gains in a row, four stock analysts give their opinions on what’s next. Stephanie Link, the chief investment strategist at Hightower Advisors, believes that even though historically September is a “soft” month, the market will continue to grow. Despite the Delta Variant and Hurricane Ida, Link believes that we’re still at peak growth and next year will still see reasonable growth.

Ritholtz Wealth Management CEO Josh Brown states that “analyst after analyst” says were overdue for a correction of 10%. “On average, every 18 months, you get a 10% correction. That is like saying it might be 75 degrees in San Diego today”. In general, he believes that as long as Facebook, Apple, Google, and Microsoft stay steady, there’s nothing to worry about.

Liz Young, SoFi’s head of investment strategy, expects September to be at best a pause in the rally. She believes that there’s not a lot of earnings news coming out and the Fed’s plans are looming on the docket. “It’s going to test all of our conviction”.

Brian Belski, chief investment strategist at BMO, believes that even if there is a 5-8% market correction heading into October, there is a 12 to 15% upside from there. “[This bull market] will go down as the biggest bull market in history, a 20-25 year bull market, one that was doubted”. Overall, he suggests investors seek out opportunities.

With a disappointing jobs report in August, at first look, it might surprise investors as previous months have been extraordinary with around 1 million new jobs generated. At closer inspection, the jobs report has the Delta Variant written all over it. With the recent surge in cases, a total of just under 40,000,000 in the past month, several industries that were expected to produce net gains of jobs underperformed.

The hospitality and retail trade sectors, both highly sensitive sectors, lost 0 and 29,000 jobs respectively. Many investors don’t see this as a concern, however, as average hours per week, average salary, and manufacturing jobs are increasing and stable. Similarly, there isn’t a shortage of available jobs for the unemployed and consumers are still spending.

Adam Ozimek, the chief economist at Upwork, was quoted saying that the jobs report “really reflects in a lot of ways the pandemic is the economy, and the economy is the pandemic.”

Overall, the Delta Variant continues to spread and affect all people, vaccinated and unvaccinated. Some investors even believe the Delta Variant might be the catalyst for the next correction. At the end of the day, playing the market and economic news is difficult to get right 100% of the time.

The market took baby steps this week as all indexes traded within a close range. With daily cases on the rise due to the Delta Variant, some investors are concerned. After 7 months of positive gains in a row, four analysts weigh in on how the market will be going forward. With a disappointing jobs report in August that was a third of what investors expected, a closer look finds that there is an obvious issue causing the chaos.