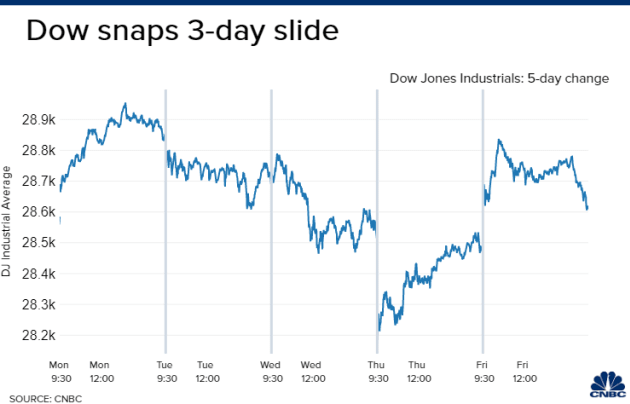 Stocks had a rough and volatile week, with new information about stimulus, the current economic recovery, and coronavirus numbers. Stocks opened this week up by rising on Monday but then fell for the next three days. They rose on Friday when data about retail sales showed an increase. The S&P 500 finished the whipsaw week higher 0.19%, the NASDAQ finished the week 0.79% higher, and the Dow Jones finished 0.07% higher and is now just 3% lower than its all-time high of 29,568.57.

Investors digested fresh new information about the economy this past week when retail sales for the month of September. Retail sales measure purchases at stores, restaurants, and online. It is widely considered to be an indicator of how strong consumers are. What will likely drive this market in the near future will continue to be how strong investors feel consumers are. In other words, they want to see consumers continue to spend more. Sales increased by 1.9% compared to the 0.7% that economists expected. This signals that consumers were spending in anticipation of more months staying at home.

As flu season approaches, health experts are worried that a double whammy of the seasonal flu along with COVID-19 that will lead to more outbreaks and deaths — a third-wave. The number of cases reached a record-high when cases increased more than 69,000 on Friday. This pushed the total nationwide cases over 8 million cases. The country is averaging 55,000 new cases a day, representing a 16% increase in average daily new cases this week compared to last week. Previous editions of this newsletter that we’ve sent out covered what was happening in California, Texas, and Florida as they were reporting the largest number of cases. However, when we look at the number of cases per 100K people, North Dakota, South Dakota, and Montana are higher. It’s showing that COVID-19 is having an effect on the rural areas in addition to urban areas.

On the vaccine front, Johnson and Johnson paused its Phase 3 trials after a trial volunteer developed an illness. Pfizer, which was previously expected to release data regarding its vaccine in October, has said that their clinical trial results won’t be ready until mid-November.

Pelosi and Mnuchin are reportedly negotiating, with testing, addressing disproportionately affected communities as the main points of contention. This next week will reveal whether the chances of a stimulus deal before the election will increase or decrease. Especially recently, news of stimulus has swayed investors’ beliefs about the continued strength of the economy. We expect news of stimulus and the election to continue impacting the market till the November elections.