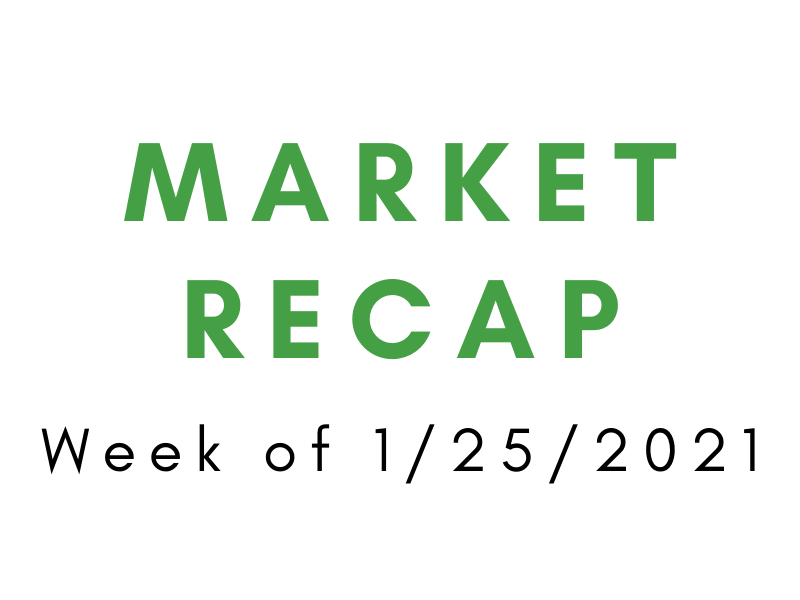 This past week was quite a unique one. The market as a whole dropped this week as the Dow Jones dropped 3.27%, the S&P 500 dropped 3.31%, and the NASDAQ dropped 3.49%. All the talk on Wall Street this past week centered on how an army of Reddit traders mounted a short squeeze of GameStop’s stock. Long-story-short, Reddit’s WallStreetBets community figured out that a hedge fund — Melvin Capital — had a short position against GameStop. What followed afterward is some truly unprecedented movements.

WallStreetBets traders are often characterized as a young 20-year-old using Robinhood to trade stocks like a video game. These traders were supposedly fueled by a desire to prove a political point to institutional investors that they had power. Or maybe it was fueled by just an experiment by some people who were bored out of their minds. Or maybe it was both — or maybe it was neither. People will attribute the motivation behind this short squeeze to various reasons and can have evidence to back it up. But the implications remain the same, which we’ll explore in the third headline.

COVID-19 has infected 103 million people worldwide and killed 2.2 million. The vaccine’s rollout is still slow. At the current pace, it’s not likely that countries will be able to vaccinate the majority of their populations by the end of the year. This raises fears that the world will be slow to rebound from COVID and that the recovery will take longer. As the Erik Nielsen, the chief economist of UniCredit Bank, puts it in WSJ, “So long as the pandemic terrorizes part of the world, normality will not be restored anywhere.”

This “GameStonks” mania this past week has taught us a couple things. First, it taught us about the true power of retail investors. In effect, the internet community of WallStreetBets became its own institutional investor and could therefore affect the stock of GameStop. Institutional investors often have the power to move markets, especially in the short-term. This rallying of millions of retail investors, not just from WallStreetBets, has shown the true market-moving power that individual investors have when they group together.

Secondly, this past week taught us about risk in the current environment. Shorting GameStop seems like a fairly rational decision. The company is losing the battle to digital video game sales and its stores are recording fewer and fewer sales. The hedge funds, therefore, decided to bet against a company they believed would go bankrupt soon because of those trends.

The fact that Reddit traders have bid up the price doesn’t actually change how the business is actually doing. It’s more likely than not that GameStop’s stock is still worth something in the single digits and currently reflects a game of musical chairs where individual traders are trying to get in and get out with a profit. However, the larger the number of buyers in this short squeeze gets, the greater number of people there will be without chairs once the music stops playing.

But, hedge funds only would have been able to understand the risk of GameStop as it pertained to the underlying business and an assumption of rationality in the market. No one could have anticipated that risk would arise from Reddit traders banding together and fueling the stock with FOMO. This type of risk — the risk of irrationality— is one that is the most prevalent feature in bubbles. While the scope of this irrationality was limited to just a few small stocks, this past week has changed how hedge funds and other institutional investors will manage their money as they will focus on how irrational the market can get due to FOMO and the sentiments of “revolutionary” retail traders. The actions taken by legal authorities like the SEC and even the Biden administration further fuel these “revolutionary” sentiments.

Investors’ belief that the market is too irrational drove the selloff this past week. How this will unfold will be something that investors will debate for months to come. But one thing is certain: traders on the Internet haven’t just gamed GameStop — they’ve gamed an entire market.