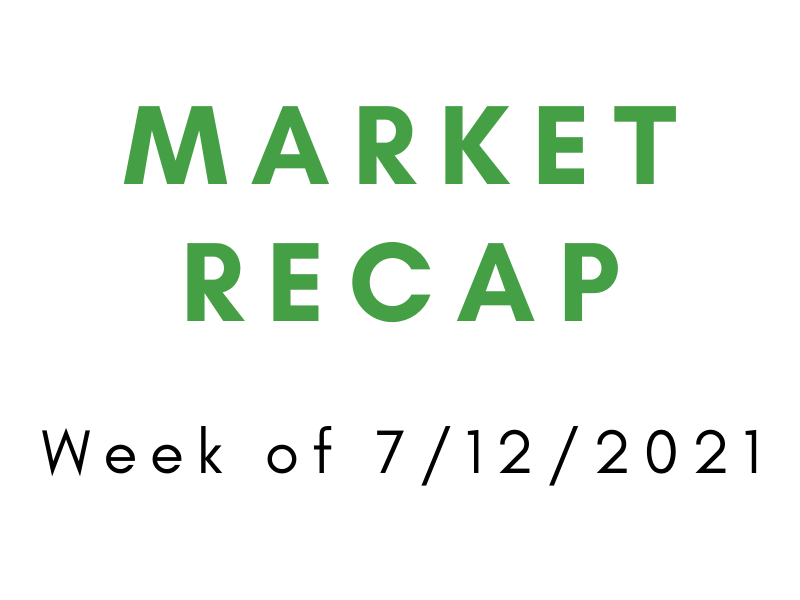 1. Shying Away from the Spotlight

As earnings season got underway, all three major US Indexes retreated slightly away from the record highs of last trading week. The Dow dropped around .5% while the S&P 500 fell around 1%. Shying away from the spotlight, like James Harden in the playoffs, the NASDAQ lost all its momentum and fell around 2%. Overall, this week’s tech and growth stocks took a major hit, partly because the CPI, a measure of inflation, surprised economists with its surprising growth from last year.

In the wake of the CPI report and other worrying inflation measurements in this last monthly report, investors have been on the line regarding the market’s future. Unlike the indecisive investors that have an on-and-off relationship with growth stocks, Fed Reserve Chairman Powell didn’t hesitate to tell a congressional panel that the central bank wouldn’t sweat over lifting interest rates. However, some of the past inflation in consumer goods can be explained by a resurgence in retail sales, rising .6% in the month of June.

Outside of the US, like Derrick Rose after his untimely injury, China has been recovering from the pandemic at a much slower pace than expected. China recorded a 7.9% annual growth rate in this year’s second quarter, down from a record 18.3% in the first quarter.

China’s government has set the expected full-year growth estimate to be more than 6%, showing their distrust in their economy for the rest of the year. However, the Chinese government announced its plans to add liquidity into their economy, helping overall market sentiment and helping the performance of emerging-market stocks.

2. Cozying Up to China in the Name of Profit

Kyle Bass, an American-made hedge fund manager and founder of Hayman Capital Management severely criticized U.S. Companies that fail to speak against human rights abuses in China. The decision between morality and profit is one many businesses and large companies have to frequently make.

Sacrificing quality and pay for employees to cut costs is something many Fortune 500 have been denounced for. Bass blasted American companies that speak up against social injustice in the U.S. but fail to take positions around human rights abuses in China, specifically concerning labor and sweatshops. In particular, Nike has taken the brunt of Bass’ harsh remarks saying that their job is “to maximize profitability, they are social justice warriors where they see fit until it affects their wallet.”

Though the imprisonment of Muslims in China has faced bipartisan backlash, China’s critical role in supply chains prevents much action from being done. China, which has a population of 1.4 billion people boasts the second-largest economy in the world. Bass, who rose to fame betting against the 2008 financial crash, was quoted as saying “when it comes to a regime that the U.S. State Department has labeled them as genocidal and committing crimes against humanity, their lips are sealed”.

Their lips might not be sealed, but the US government’s hands are tied as they don’t want to risk their good-standing with China, but also don’t want to condone human rights violations.

This market essentially turns the power to pollute into an allowance that is bought and sold for the right to pollute. Think of it as your parents restricting you to an hour of video games per day, and you say you’ll read an extra thirty minutes for more time. Like this, companies can bid on the right to pollute the environment, essentially making carbon emissions less attractive.

The leader of China, Xi Jinping, has always stated that he wanted to cast his country as environmentally responsible and has pledged to take on climate change. In 2020, XI made two significant claims, China’s emissions would peak before 2030 and the country would achieve carbon neutrality before the year 2060. Carbon neutrality is like eating extra vegetables to counteract the juicy pizza you had for lunch. Essentially planting enough trees to offset the total carbon emissions.

Overall, this new market limits the amount of carbon dioxide that companies can release, creating competition from innovative solutions to become energy efficient and adopt clean technology. In some cases, allocating money to becoming “clean” might be, for the first time, more profitable than disregarding climate change altogether. Regardless, this marks an interesting approach to reducing pollution through purely economic means.

A down week overall for the market has investors falling out of love with tech and growth stocks, breaking a good relationship that’s been going on the past few weeks. Balancing profitability with morality is a tough decision, at least for big companies trying to appease investors and create promising financial news. Speaking of promising news, China has created a new financial market trading carbon emissions.

I am a freshman at TJHSST. I write about stocks and current events.