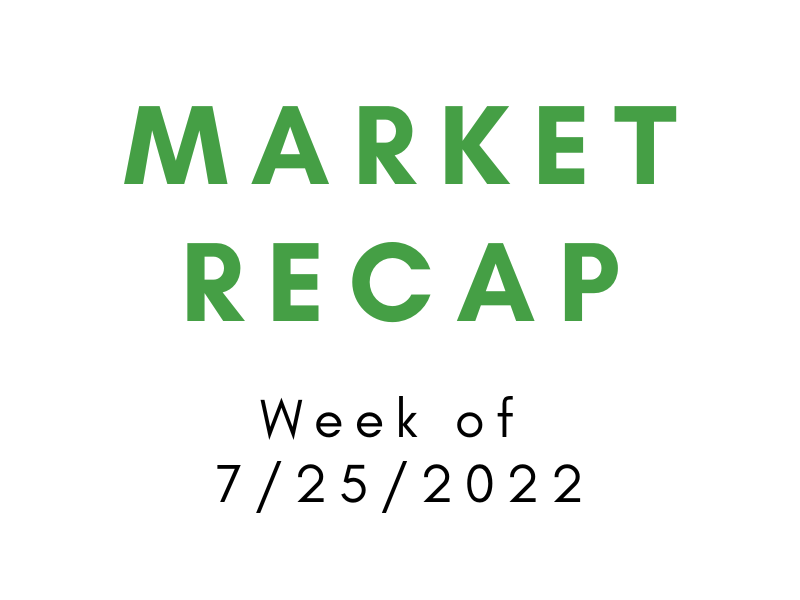 Investors pushed back against their worries of a recession and managed to finish a week in the green. After the news of a rate hike leaked on Wednesday, all three major US indexes earned between 1% and 2%. This boosted an already strong week as the major indexes all finished with major gains. The S&P 500 rose 4.3%, the NASDAQ soared 4.7%, and the Dow Jones increased a solid 3% on the week.

Though the upward market movement bolstered some investors’ confidence, nothing in life is 100%. The GDP declined another 0.9% after contracting 1.6% in the first quarter, adding fuel to the fire of those who believe a recession is imminent, or already here. The Federal Reserve hiked interest rates another 0.75%, to a benchmark of 2.25-2.50%. In the week to come, investors set their eyes on the July jobs report which hopefully shows June’s strong numbers continued into July.

The market surged on Wednesday after the news of the Federal Reserve rate hike. For something that hurts the economy and the market, the market’s reaction may seem weird. Many experts believe the tone of the Federal Reserve switched from “hawkish” to “dovish.” To some this indicated that a potential end to the Fed’s rate hikes is in sight, which is incredibly bullish news warranting a rally. However, a rally is counterintuitive to the Fed’s rate increases, as the interest-rate hike is supposed to tighten economic conditions, and a rally should indicate they are being loosened.

Right now, a rally would only fan the fire of inflation whereas if the Fed’s rate-hikes work, economic decay is bound to occur. There is no good outcome in the battle between the market and the Fed. Neil Dutta, head of U.S. Economics at Renaissance Macro Research said “the fact that the Fed hiked 75 basis points and financial conditions have eased is a problem.” Only time will tell how the market responds to the Fed’s future actions, but right now the Fed’s only priority is to bring down inflation.

COVID temporarily boosted the earnings of many industries, due to social distancing, quarantine, and safety. The gaming industry was one of the industries that benefited the most from COVID. With people staying inside, they turned to their Playstations, Xboxes, and PCs for entertainment and social content. Now that people are venturing outside once again, the companies behind these consoles and popular games are experiencing a decline.

A return to normalcy was bound to happen for this industry, but a regression in earnings will be a tough pill to swallow for some investors. In general, gamers are just playing less as SONY reported gameplay was down 15% in the first quarter of the year. Game hardware sales have also had a tough time recently, as supply chain issues have prevented supply from catching up to demand. The gaming industry serves as a reminder that COVID stocks can’t sustain their high value forever, or can they? Look at Zoom, which peaked during the height of the pandemic and is now down significantly. Not all COVID stocks can keep up their rapid growth.

The market rallied hard this week, taking off with the news that the Fed raised interest rates. Interest-rate increases hurt the market, so the S&P 500 increasing on this news is just a bit odd. The gaming industry has started to see a decline in its performance as the pandemic slowly fades.