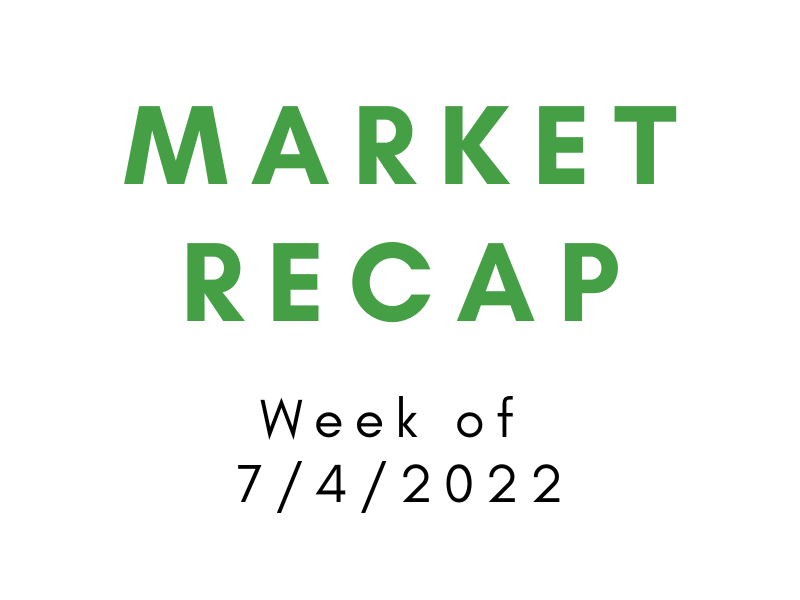 In this latest week, investors embraced the summer and flip-flopped as the market posted modest gains. These gains nullified most or all the losses from the previous week, rallying from an unexpectedly strong jobs report that showed 372,000 new jobs were created compared with the estimate of 250,000. Fortunately for people visiting their family on July 4th, the price of oil dropped under $100, though it finished above that price mark. This coming week, look ahead to Wednesday’s release of the Consumer Price Index in which we’ll find out if the US got any relief from inflation.

If you tuned into the news this last week, it’s almost a guarantee you heard about the overturning of the landmark Roe v. Wade case. For nearly 50 years, the case set the precedent for federally protected abortion rights across the country. Whichever side of the case you’re on, the Supreme Court’s decision not only has a large social impact but an economic one as well.

Women make up a large percentage of the workforce in the US, and during the pandemic, the lack of social infrastructure supporting women became apparent as many had to quit their jobs. Research shows that parental status has a large role in a woman’s decision to participate in the labor force. With more women having to leave the workforce caring for children, less money enters the household, and by extension, less is spent across the economy. That means less money for food, clothing, luxuries, eating out, and other factors that contribute to the GDP and economic growth.

“Women lose an average of 18% of their earning power when they take an off-ramp and 37% of their earning power when they spend three or more years out of the workforce,” according to Forbes. As a result of childbirth, the earning potential of women also decreases substantially, as the wage gap between fathers and mothers is greater than men and women on average. Overall, the Roe v. Wade decision doesn’t just affect the US socially, but also economically.

As Americans pump gas across the country, frustrations mount over incredibly high gas prices. Choices about vacations or the restaurant for Friday night dinner are now being decided by mileage. President Biden now believes that a gas tax holiday might be a potential fix. The change would save consumers 18.3 cents for every gallon they pump. In 2008, when gas prices were nearing highs, this same solution was pitched by Presidential candidates John McCain and Hillary Clinton. Barack Obama, on the other hand, addressed the idea as a gimmick.

The tax holiday would serve as a band-aid covering up the wound but not helping it heal. It doesn’t serve to heal the underlying problem which is the supply shortage caused by the Ukraine-Russia conflict. Furthermore, the Highway Trust Fund is paid for by this levy, and the holiday would reduce the flows to the fund even though it’s already struggling. The gas tax hasn’t been raised since 1993 when the price of gas was just over $1 a gallon.

Marc Goldwein, policy director at Committee for a Responsible Budget, suggests that the gas tax holiday will push up demand. This increased demand would then raise prices and no significant change would occur.

The market lost its momentum from last week and continued to sink deeper into the red. The landmark overturning of the Roe v. Wade court case not only has social impacts but economic ones as well, especially for women. The President suggested a gas tax holiday but its many shortcomings might hurt consumers even more.