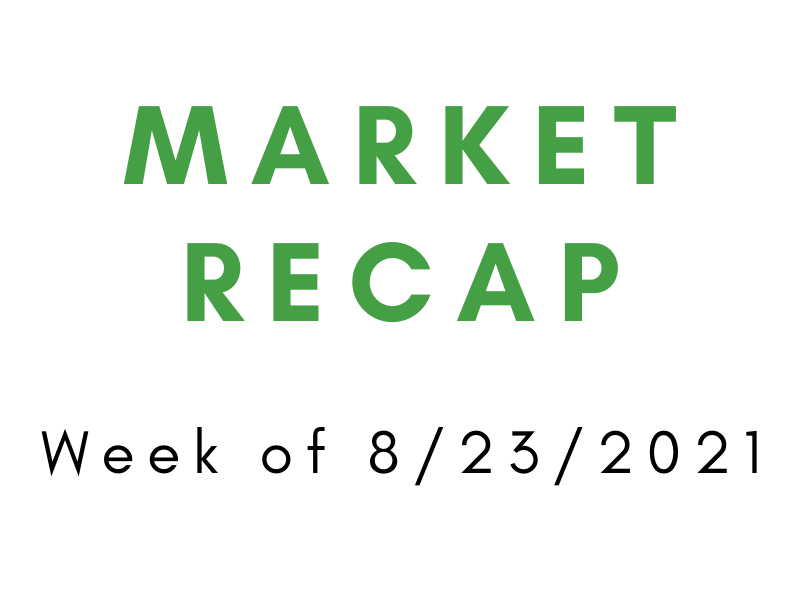 Investors regained their footing this week as they covered most of the ground they lost last week with a momentum shift. The S&P 500 and Dow rose more than a percent but the NASDAQ, in a brilliant performance by tech companies, rose nearly 3% on the week. With the gains, two new highs were set at landmark numbers. For the first time, the S&P 500 closed above 4,500 while the Nasdaq set a new standard by breaking the 15,000 point barrier.

At the Jackson Hole virtual conference, Powell confirmed the central bank would be tapering bond purchases, but warned against tightening monetary policy in response to inflation. This also comes at a time where the U.S. government data showed that oil demand climbed to its highest level since investors started hearing about COVID. Oil prices rallied to above $68 a barrel.

Investors will have to walk on their tippy-toes as they’ll have to navigate through the minefield that is next week. The transition between months will present economic reports on housing market data, reports on the manufacturing and service economy, and employment statistics. More statistics show that investors are fatigued from renewed restrictions due to the Delta Variant. Retail spending is done and worries experts that the health of the economic recovery might be worsening.

With Fed Tapering confirmed and upcoming changes in economic and monetary policy unknown, Jim Cramer, host of Mad Money and one of the most famous investors on TV, offered a basket of stocks he believes could continue to succeed. Among these companies are the well-known Nvidia, Best Buy, and Deere. Cramer believes that you should “forget about the central bank and just run with the bulls”.

Though retail stocks like Best Buy and Bed Bath & Beyond have already risen significantly in the past few months, Cramer still believes it’s not too late to purchase shares. For Best Buy especially, with their digital transformation, Cramer believes there is a good chance for additional success. The most “unknown bull market,” at least according to the CNBC personality, is agriculture. With Deere advancing their agriculture technology, Cramer believes that their products could be “revolutionary”.

Crypto has found some resurgence as Bitcoin, now topping $50,000, is getting closer and closer to the high it set back in March of this year. After the crushing $1 trillion cryptocurrency crash in May, when regulatory crackdowns caused a panic selling, crypto is now returning to the spotlight.

This run comes at a time where PayPal announced it would expand its crypto services outside of the US and into the U.K. The British can now buy, sell, and transfer crypto through PayPal this week. As of now, four types of cryptocurrency are supported. Ethereum, Bitcoin, Litecoin, and Bitcoin cash are now all available on PayPal. The post-crash rally has seen many altcoins make a surprising recovery and has brought the total value of cryptocurrency to over $2 trillion.

On another crypto front, NFTs are back in the limelight. When NFTs first started popping up, CryptoPunks, the first digital art marketplace for rare NFTs was just starting. Now, over $1 billion in transactions have gone through CryptoPunks and the NFT world is just getting started. Originally, NFTs was just a testing ground for Ethereum technology and applications. As new uses for NFTs become implemented, the outlook for this unique space in the crypto world is shining.

All three major indexes bounced back after a bad week. Fed Chair Powell confirmed the suspicions that the Fed would start tapering bond buybacks but signaled no serious monetary policy would be changed. Jim Cramer believes certain stocks in tech and agriculture have more upside ahead. After the $1 trillion crash in May, the crypto market is booming and Bitcoin is riding along breaching the $50,000 again.

A Background on Greg Abel