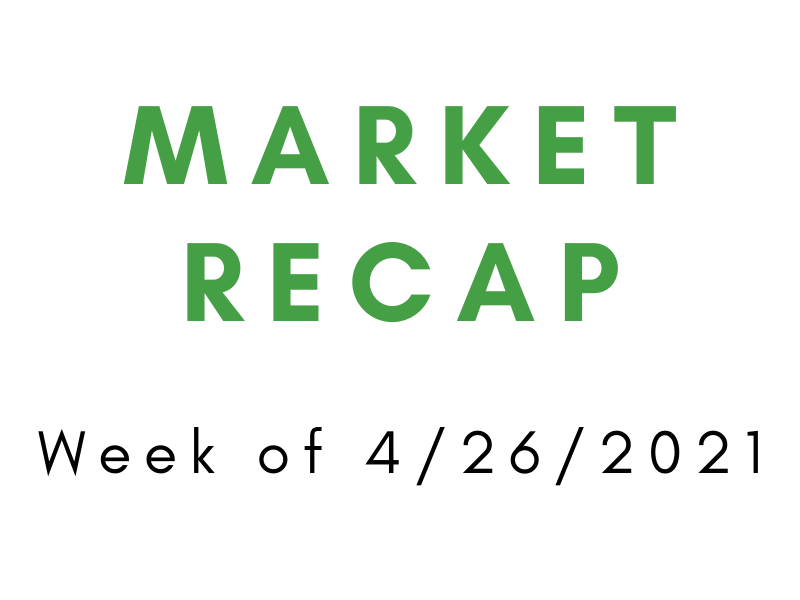 After a four-week string of mostly positive gains during mid-April, for the second week in a row, the major indexes barely changed. This week was basically flatter than the Earth (Kyrie Irving gets it). The Dow and NASDAQ posted slightly negative weekly results, falling 0.5% and 0.39% respectively. The S&P 500 was just up 0.02% on the week. However, just like beautiful spring flowers that flourished this month, the entire month of April blossomed for investors as the S&P 500 rose more than 5%, leading to record highs.

Like Jacksonville picking Trevor Lawrence, earnings season was no surprise as analysts’ estimates of results were met or exceeded. Symbolizing this recovery are the GDP and economy as they recorded their 3rd quarter of growth.

In other news, the labor market is healing nicely since the pandemic lows as weekly unemployment claims fell to around 555,000 and job generation looks to be on the rise. Finally, after much suspense, investors can sit back and relax as Fed Chair Powell credited the recent uptick in inflation to temporary factors. This statement leads many investors to believe that the Fed policy will not change to fight inflation, thus keeping economic growth unrestrained (until it gets restrained).

With summer approaching for many students and their families, the CDC recommends delaying travel until individuals are vaccinated fully due to potential risks travel incurs. As travel picks up as the weather gets nicer, it looks as if US cases will continue trending down as the moving average of cases decreased 16% from last week.

At the forefront of the news has been the COVID-19 crisis in India. Cases have been skyrocketing primarily due to poverty, lack of accessible hospitals, inability to receive vaccinations, and cramped living conditions. Additionally, statistics around cases and deaths in India may be underestimated, according to NPR.

Though exact results aren’t guaranteed yet, researchers estimate that vaccine data on younger children will arrive by the mid-summer, just in time for the new school year where in-person school will be encouraged and virtual schools will likely be used as a last resort.

In the US, conditions are better, but with restrictions being lifted in some states, the future is uncertain.

Like bubble gum that loses its flavor, investors’ interest in SPACs is dwindling. SPACs are empty shell companies that raise money by going public and then use that money to merge with a company that actually does something. It’s essentially a new way to go public.

Imagine you’re at an amusement park waiting to ride the best roller coaster, but the waiting time is way too long. Rather than wait in line, you could ask someone to wait in line for you while you do other fun stuff at the amusement park. When the person who stood in line for you gets to the front, he notifies you and you take back your spot and ride the roller coaster. In return for standing in line, the person receives compensation from you. SPACs are the people who wait in line and their compensation is getting equity in the company that they take public, which is the person who asked them to stand in line.

Most SPACs have a base price of $10. At the peak of the market, these shell companies would be frequently trading at around $30 per share, an increase of 200% from their base price. These movements in price were like Johnny Manziel — all hype but no fundamentals.

As the market slowly realized that not all SPACs would take off, and that the market was oversaturated with subpar companies, the success of SPACs fell. Chamath Palihapitiya, the so-called “King of SPACs”, has suffered major losses in most of his SPACs as they have all turned for the worse. He still holds hope out for his companies, but many SPACs are dipping below their initial price of $10. When this happens, they are doomed to fail.