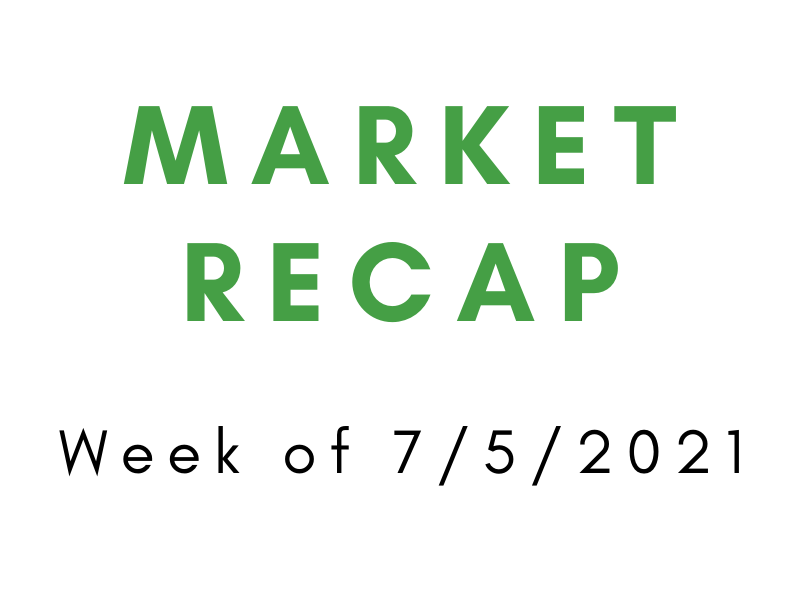 1. A Little Bit of Everything

This week, the market gave out a little bit of everything to investors from federal spending outlooks and labor market statistics to COVID variants affecting overall economic growth. Overall, all three major indexes rose by less than 0.5%. However, they did touch new highs only to experience significant loss on Thursday with a big move down.

As earnings optimism for the new quarter is on the rise, the price of oil is not. After a string of six consecutive weekly gains increased the price of a barrel rise to over $75, the rally was interrupted by uncertainty over whether certain countries would cut future supply levels.

Similar to the Bucks and their poor performance against the Suns team, small-cap stocks are in a slump compared to their large-cap counterparts. Like the Bucks hoped to do in the finals, bond prices rallied sending the Treasury yields below 1.3% intraday on Thursday. These rates are equal to their previous rate back in February, with the high being in March at 1.7%.

2. Jim Cramer and the Delta Variant

Jim Cramer, one of the most famous investing personalities on television, has millions of people that listen to his opinions. With these people tuning into his show “Mad Money” on CNBC, he holds significant influence. By trashing a stock like Poirier and McGregor trash-talk each other, he can swing sentiment and even create a brief sell-off.

This past week on Thursday, Cramer stepped up to the plate and came out swinging, blasting government leaders for failing to get a grip on COVID. In specific, the worrying Delta variant is 50% more transmissible than the original strain and is spreading like wildfire. Already this week, the Delta variant has forced Japan to shut down after a massive outbreak. In turn, this decreased inflation expectations and decreased bond rates as investors worry that global economic recovery might be halted by this novel strain.

On Thursday, stock averages plunged almost 1%, and Cramer says that “the decline can be attributed to the Delta strain that’s spreading quickly across the globe”. He also criticized the FDA for not giving full approval to the Pfizer and Moderna vaccines. One thing is for certain: if the Delta Variant affects more people, it poses a significant risk for people and their investments in the stock market.

As the most powerful man in America, besides Elon and his arsenal of tweets, Joe Biden is trying to upset the plans of Big Tech. This Friday, he signed a new executive order primarily cracking down on the anti-competitive, antitrust-like practice in Big Tech and other sectors. In a speech before signing the order, Biden was quoted saying “capitalism without competition isn’t capitalism. It’s exploitation”. The order includes 72 recommendations intended to change the foundations behind antitrust laws as well as corporate consolidation.

Overall, think of these rules as the MLB’s new policy targeting pitchers and their use of “sticky stuff”. Like pitchers dominating the league at an unprecedented rate, tech companies are monopolizing their industry by buying out competitors and Biden aims to prevent this. If the FTC does change its policy and start to crack down on the actions of Amazon, Apple, Facebook, and Google, it’s not good news for investors in Big Tech.

The market was relatively even throughout the week driven by a regression in inflation. However, the new COVID Delta variant is making some investors fearful of potential economic shutdown. According to Jim Cramer, the FDA and the US Government are at fault. Biden vs Big Tech might be the showdown we’ve been waiting for to open new opportunities for competitiveness in an industry dominated by FAANG stocks.