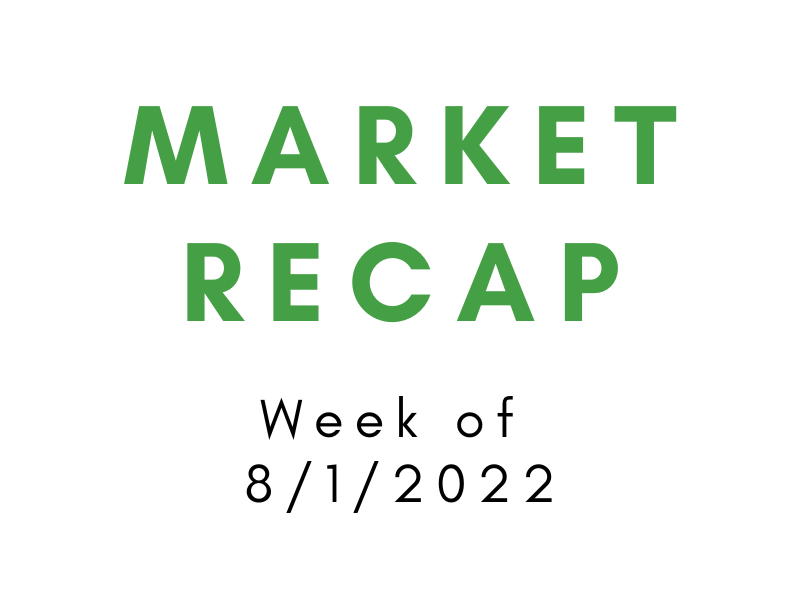 1. Cooling Off in the Summer

The red-hot rally of last week cooled off a bit as the NASDAQ gained 2% and the other major indexes changed marginally. Some metrics indicate the US economy is slowing down, though job reports surprised investors and analysts. The government reported job growth of 528,000, far exceeding what analysts expected. Unemployment slipped a tenth of a percentage point from 3.5% to 3.6%. This latest monthly gain in jobs was a milestone for the labor market as it officially returned to pre-pandemic levels similar to those of February 2020.

Earnings momentum also continued to build as companies have exceeded analysts’ expectations in almost all sectors. Fortunately for many investors traveling as the end of summer approaches, oil prices have slipped under the $90 a barrel mark, for the first time since the start of the ongoing Russia-Ukraine war.

With inflation surging around the globe, the Bank of England – the UK equivalent of our Federal Reserve – raised interest rates by half a point. UK policymakers have now projected the longest country-wide recession since the last global financial crisis.

2. The Downfall of NFTs

Once all the rage and the most talked about topic on Youtube and Reddit investing pages, NFTs have seen a historic fall-off. Logan Paul, a popular social media influencer, recently posted about a Bumblebee NFT he bought for $623,000 a year ago. He just reported that his NFT is now worth virtually nothing, a clear representation of the NFT market’s fall-off. The market primarily flatlined as other major cryptocurrencies like Bitcoin and Ethereum fell off. In particular, NFTs are minted on the Ethereum Network which has recently suffered a major decline.

You might’ve heard above the Bored Apes Collection, which was all trading above $200,000. Owners of these NFTs will be displeased to see them trading under $100,000 now. At the height of the hype, the sale volume was around $4.6 billion and now it’s down over 50%. Moreover, the number of unique, or first-time buyers of NFTs has rapidly decreased. To outsiders, it looks like NFTs might’ve been a worthless fad that didn’t live up to the hype.

3. Costco As A Role Model

In a recession or economic downturn, many investors fall back on investing in companies that people turn to when money is tight and the essentials are necessary. A great example of this type of stock is Costco. To hedge against a recession, investing in Costco may be a smart idea. In the last 12 years, Costco has grown at a steady pace, becoming the 3rd largest retailer in the US behind Walmart and Amazon. Costco is the type of company that fares well during times of high inflation as it decides the price of its goods with its respective supplier and can then adjust when prices increase.

Additionally, labor shortages haven’t affected Costco drastically as it already pays its workers a strong salary. The best part of investing in Costco, however, is its dividends. With a safe, steady stock, dividends will help you hedge against any losses incurred by the recession as the income will negate some losses. In years when the stock is doing well, Costco sometimes offers a “special dividend” to its investors. Overall, investing in stocks people turn to for the essentials, especially when money becomes tight, could be a way to invest during a bear market.

The market cooled off from the rally last week, but reported some promising job growth statistics. Demand for NFTs has dropped quite a bit, wiping out the unrealized fortunes of prominent celebrities. In an economic downturn, stocks like Costco may be worth paying attention to.