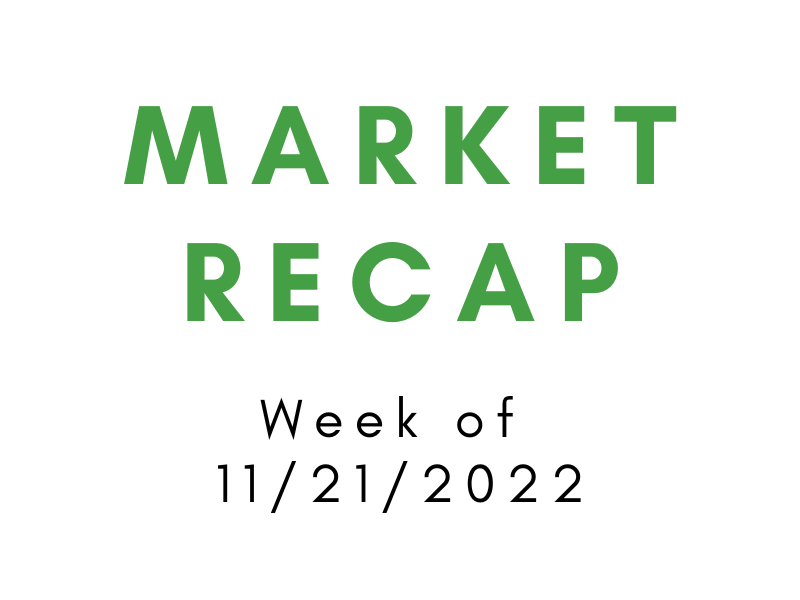 Investors had a lot to be thankful for this trading week, as all three market indexes finished positive. The Dow Jones finished 1.8% up while the S&P 500 grew 1.6%, both indexes outpacing the NASDAQ which rose only .7% on the week. This result has been indicative of 2022 as a whole, as the Dow Jones and S&P 500 have strongly outperformed the NASDAQ this year.

With this most recent trading week, the S&P 500 is up 12% from its mid-October low. In Fed’s released minutes, it shows that a majority of officials believe that a slow-down of increasing interest rates is appropriate. At the last three Fed meetings, rate increases of ¾ of a point have been agreed upon. Oil declined for another straight week, under $77 a barrel and down more than 17% from its recent high of $93 earlier this month.

While people across the country down turkey, mashed potatoes, and pie, they might notice their bank account going down more than usual as well. Analysts suggest that Thanksgiving this year will be 20% more expensive than last year, not something investors are very thankful about. Embracing the holidays this year will be more financially taxing than years before, as supply chain shortages and inflation are causing items at the store to be more expensive than ever. Though oil prices have come down recently, they are still much higher than they were last year, leaving many people to wonder if driving to their family’s celebration is feasible.

Upcoming Christmas won’t leave investors in a merry mood either, as inflation is resulting in more expensive gifts. Pittsburgh’s PNC Bank ran an estimate of how much the items in the “12 Days of Christmas” would cost and came up with the figure of $45,523, 10.5% higher than last year. Overall, with inflation still surging and consumer prices rising, consumers’ wallets will be feeling a little more empty than usual this holiday season.

Piracy results in the loss of billions of dollars each year for the American economy, and consumers around the country recognize illegally obtaining copyrighted material as morally wrong. Not only does piracy hurt authors and video creators, but it also results in job losses and profits being cut. Just recently, ZLibrary was seized by the FBI. ZLibrary provided millions of books and textbooks to the American public, with just a few clicks.

Most students on the site were just searching for textbooks, which can run up to $300. Though many students were upset over the site being taken down, they also recognized that the site was illegal and harming authors. The piracy of ZLibrary is not only a moral issue but an economic one for people everywhere.

For the sale of books through Amazon, their author’s listing might not be as high if readers are getting their book for free somewhere else. This can and has led to many authors losing their jobs and not getting new contracts for new material. Overall, piracy is detrimental to the economy but is also highly appealing for students who struggle to afford textbooks and fiction due to poor financial status.

The market recovered this week as they turned positive, with the NASDAQ falling behind its peers. Thanksgiving and the upcoming Holiday season will be more expensive than ever, as inflation’s effects spread through the entire country. Piracy is harmful for the US economy, and ZLibrary is a major contributor to it.