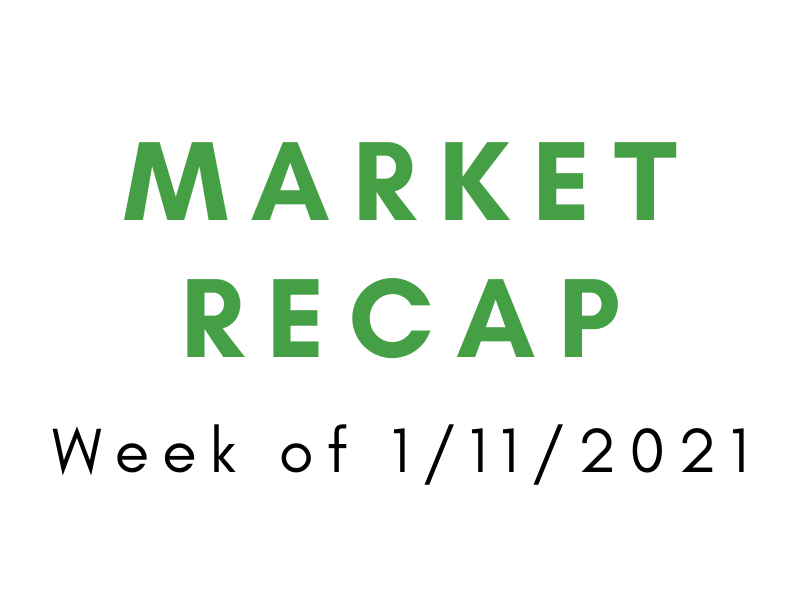 The middle of the first month of 2021 did not fare too well, as the market indexes fell. The Dow Jones fell 0.91%, the NASDAQ fell 1.54%, and the S&P 500 fell 1.48%. One reason it fell was because investors felt that the main trends that fueled the stock market’s rise in 2020 were starting to slow down. Of those trends, the two large ones are tech companies making a lot more money and the government’s economic stimulus.

Back in late 2020, officials in Washington were unable to agree on a new stimulus package to help those who were affected by the pandemic. Once they did, Biden was soon elected and he had his own ideas for a $1.9 Billion stimulus plan. He revealed those plans this past week, and Wall Street was not impressed. Investors expected a slightly larger stimulus package and also did not believe it could pass.

Based on how Congress went back and forth between Democratic and Republican proposals on the size of the package in late 2020, Wall Street doesn’t think that a package as large as $1.9 Billion will pass easily. The lack of belief in Biden’s stimulus plan led investors to reconsider the future. Stocks have been priced for good news in the future. But the reaction to this stimulus plan reveals that the future might not be as rosy as investors had hoped coming into 2021.

COVID-19, to many people’s dismay, did not magically go away when we entered 2021. In fact, just two weeks into 2021, it’s reached a worrying figure: more than 2 million deaths worldwide. Even though vaccinations have started, the speed at which they are happening still is too slow for too many. The vaccination itself is starting to face some issues as well. In Norway, the Pfizer vaccine was linked to the deaths of 29 elderly people who took the vaccine.

Large cities in America continue to have the highest COVID rates. Los Angeles has the worst COVID statistics of any city, with 1 in 3 LA County residents having been infected. The entire county has 1 million total cases, which makes up more than a third of all cases in the entire state of California.

Bitcoin, the famous cryptocurrency, has made a comeback in December of 2020. After reaching its 2017 high of $20K, the crypto bubble popped, and Bitcoin’s price fell and remained below its previous high. Many people sold their Bitcoin, and only the truest of believers held on. But since the stock market crashed in March of 2020, Bitcoin has been steadily climbing. The media began to cover its rise, and eventually in December of 2020, it surpassed its previous high of $20K and eventually breached $40K. It’s trading at about $35K as I write this. What is the reason behind this recent, eye-popping surge?

Bitcoin is often viewed as an alternative to normal, fiat currency. In the event that something happens that weakens the dollar, owning Bitcoin may prevent losing value because Bitcoin’s supply is fixed. Basic supply and demand states that if there is more supply, the price of something will fall. What could cause the value of the dollar to fall? The answer that most investors are pointing to is the unprecedented stimulus from the government and central bank.

The government and central bank are both injecting trillions of dollars into the economy, either through direct checks, cheap loans, or some other medium. All this increases the supply of dollars available to everyone, which reduces the value of each individual dollar. This is known as inflation. Many people are buying Bitcoin so that they can avoid the devaluing of their regular dollar. As a result, many institutions, i.e. organizations that invest a lot of money, are buying Bitcoin as a hedge against inflation. This likely is the catalyst for bitcoin’s recent price surge, which is prompting individual investors, both who have invested in crypto before and who are new to the field, to buy into a rising crypto market.

What I Learned From My Time at the SEC