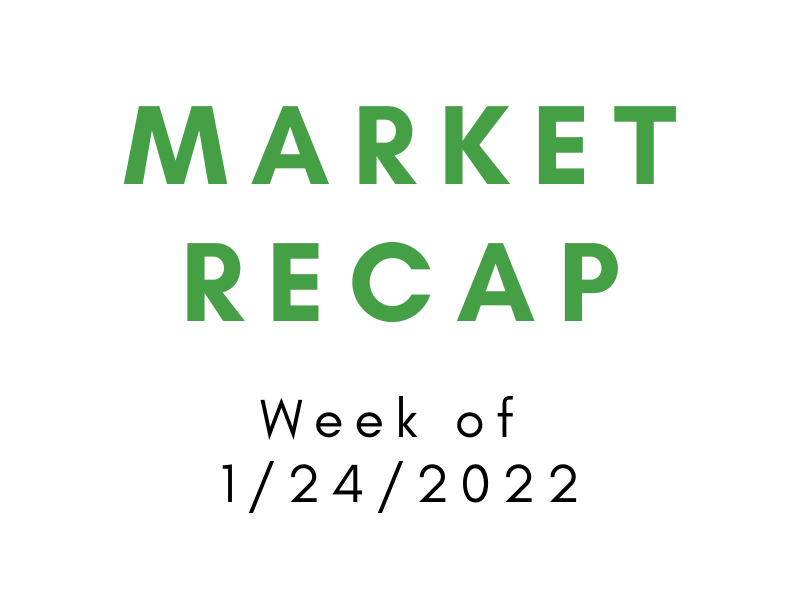 Investors compared pickup lines with major indexes as the S&P 500 flirted with a correction. The week’s low in intraday trading was -10% from highs, putting the market into a correction. However, with a rough, up-and-down week the market was able to eke out minor gains. The Dow Jones and S&P 500 were able to gain around 1% on the week while the NASDAQ just barely broke even.

The earnings reports released this week showed promise with metrics that surprised some economists. The Fed seems to be on the same path of lifting short-term interest rates as they try to put a stop to the recent surge in inflation. As of now, it looks like they will lift these interest rates sometime in Mid-March unless inflation decreases. The job report released next Friday will likely be the most anticipated economic report of the coming week as it will show if job generation has recovered from the disappointment of December.

2. War on Wall Street: Robinhood and a Year Later

One year ago, at the height of the pandemic, small-time traders stuck it to the man and produced one of the memorable moments of an action-packed year. The “War on Wallstreet” occurred when investors from the Reddit page WallStreetBets caused stocks like GameStop and AMC to experience gains in the hundreds and even thousands of percent within weeks. At the center of all the commotion was Robinhood. The commission-free trading app resulted in millions of new investors coming to the market, especially after last January’s frenzy.

However, at the height of the meme stock phenomenon, Robinhood froze trading on the WSB stocks. They cited liquidity issues but this decision has instigated numerous lawsuits and other legal drama. A year after their controversial decision, it looks like Robinhood will post a loss for profits on the year. Since its IPO in the Summer, Robinhood has lost ⅔ of its initial value, prompting rumors of a takeover. Though the gains from the initial rise have mostly retreated, the events of last January will never be forgotten as a moment when the average investors wielded just as much power as the institutions and hedge funds.

President Biden has committed to not sending any troops to defend Ukraine. He will rather defend Ukraine by imposing sanctions on Russia that will limit the economic repercussions of other nations including the US. These sanctions aren’t ordinary by any measure, they are severe and could cause significant issues for millions of Russians.

A stock market crash, runaway inflation, and other forms of financial panic could be inflicted on all people in the Russian economy and could prove a significant deterrent for a Russian invasion of Ukraine.

However, resilience is ingrained in the Russian identity, and Russia hasn’t submitted others’ demands so easily before. Additionally, from Iran to Cuba, US economic sanctions have a mixed record when it comes to getting what it wants. In this case, Biden won’t be targeting Russia’s massive oil and gas industries, doing so would result in increased inflation and many potential disagreements with US allies in Europe. Instead, the US will target foreign lending and sovereign lending to essentially create domestic unhappiness within Russia.

Unfortunately, many economists believe that to truly deter Russia, their ability to export goods must be targeted and thus impact their oil and gas business. This would inflict pain on the rest of the world. The premise of the idea is similar to chemotherapy. Chemotherapy inflicts pain on the body but does so to a tolerable point whereas, in theory, the tumor is terminated.

A rough week in the market saw the S&P 500 fall into correction territory and then make its way out to make marginal gains on the week. A year later from the January Meme Stock frenzy, we visit Robinhood, the platform that started it all, and see how it’s doing. Russia’s invasion of Ukraine has been threatened by the US government, not by military force but by economic sanctions.