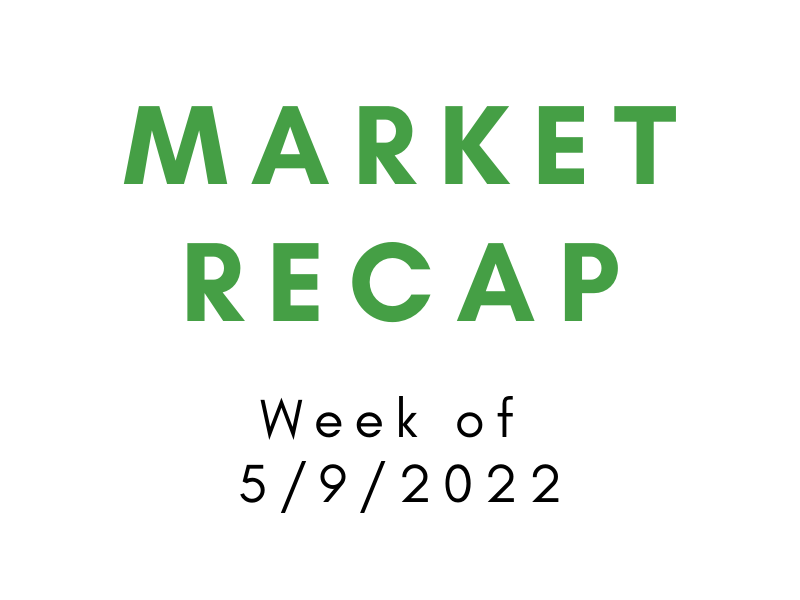 Unfortunately for investors, looking at their portfolio this week just resulted in another sea of red. For the seventh week in a row, the Dow Jones recorded a loss while every major U.S. index dropped from 2-3%. This is the first time in decades the Dow Jones has had this long of a negative streak, worrying some investors.

The recent market drop has placed the NASDAQ into bear territory while the Dow Jones and S&P 500 are rapidly approaching that benchmark. The NASDAQ is down 27% from its recent high and the Dow Jones is down over 13%. Part of this market slide has been the recent uptick in inflation, as prices are still incredibly high and all types of goods are well above their average price this time in the year. However, the price of Treasury Bonds did retreat slightly, down under 3% last week, the first the bonds have had a yield price that high since 2018.

In the crypto world, volatility has been at an all-time high with Bitcoin bouncing up and down across the $30,000 mark and several other coins witnessing large swings in price. Back to inflation, consumers aren’t the only people paying attention to its recent rise. Studies show that 85% of Fortune 500 executives mentioned inflation during conference calls with investors and analysts.

Investors are coining the term the “Tesla Effect” as more and more vehicles go electric. Snowmobiles, mowers, and boats are now being made fully electric, following the wave that Tesla originally started. Not only are these better for the environment, but they also provide an interesting investing opportunity.

Investing in Tesla earlier, for the most part, has either been one of the best decisions investors ever made, or one of their biggest regrets as its seen unparalleled growth. With legislation around the US being put into motion banning the sale of gas-powered vehicles, these new forms of electric transportation could bring a lot of value in the future.

For example, California has passed legislation banning the sale of gas-powered mowers by 2024 and gas-powered cars by 2035. Believe it or not, the lawn-mowing industry has become electric faster than the automotive industry as electric mowers represent around 17% of the current market share. Overall, the promise of cost-effective mowers and companies that sell them could be an interesting investing idea to look into.

3. Apple’s Falling But Not Because Of Gravity

When Apple stock drops, it’s bad for the entire market. In this last week, the tech giant dropped 8%, wiping out nearly $200 Billion in investors’ money and signifying the general trend of tech companies being hard hit. The stock is now firmly in bear territory, alongside many other tech giants. Generally, in times of economic hardship, Apple’s stock is considered a safe place to park money for investors because of how reliable they are.

Many investors believe the sell-off has just begun, as investors don’t sell their big-name companies in just one day. They continue selling until any sign of a rebound presents itself. The drop in stock value isn’t of any concern for Apple, as its cash reserves are massive and consumers continue to buy more and more of their world-renowned, easily-recognizable products.

I’m sure some of you are reading this article on an Apple device right now. If Apple continues to drop, it’ll likely be brought down with other tech-heavy companies as inflation hurts growth stocks, particularly tech ones.

The market had a 7th consecutive down week with tech companies hit hard. The “Tesla Effect” has expanded to other industries like mowers and snowmobiles. The decline of Apple stock signifies larger trends in the market.

Fractional Shares: Investing for the Masses