Once a powerhouse of a nation, the USA previously dominated the production empires of the world during the early 20th century. During the second world war, the US was leading the production of numerous artillery products, encompassing almost two-thirds of the Allied military equipment. At this time, American industrial production was outranking the rest of the world and was on track to double in size. Their military output outclassed the remarkable armies of the German and Japanese forces in the sense that their production and resource management outweighed the speed they were vanquished. Simply put, the USA’s production was unmatched by any armed force.

Despite their success in this area, this feat came with a major cost. America was already recovering from The Great Depression and lacked the funding necessary to maintain the speed at which they were moving on the battlefield. As a result of this, the American people had to ration the little commodities they possessed, tolerate a significant increase in tax, and sell government bonds to generate extra revenue where they could. These policies came from the War Production Board and Office War Mobilization acts in 1942 and 1943 respectively, put in place by FDR. Industries outside those that directly benefited the war massively slowed down. The automobile industry had a massive collapse during this time, where from an original 3 million cars in 1941 (when the U.S. entered the war), only 139 were made during the entire war. Americans were strongly encouraged to save their vehicles as much as possible in order to combat the drought, displayed in the graphic. 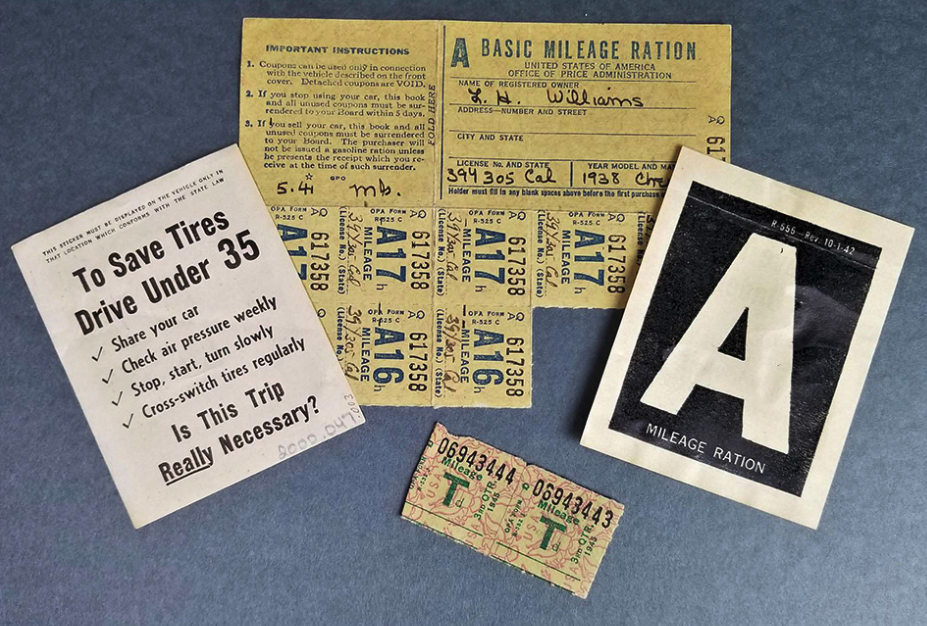 WW2 took a substantial toll on the still young nation, and the country needed external sources to revitalize their production. As the war concluded, global trade “expanded at its most rapid pace of the twentieth century”, 290% higher than before the war. This time period, roughly two decades after the war, allowed for countries to advance their socioeconomic policies, and expand into a now generally peaceful Earth.

In Andrew G. Terbough’s paper, The Post-War Rise of World Trade: Does the Bretton Woods System Deserve Credit?, Terbough explains how European countries began the process of currency exchange; a process that the USD failed to engage in. He explained how “by the end of the (1950s) … America lapsed into persistent current account deficits. With the redistribution of reserves away from America, European countries were ready to restore full convertibility on 27th December, 1958.” 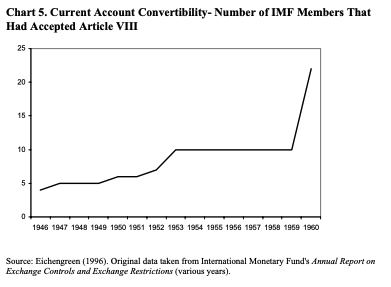 The chart above references this change in policy, where IMF (International Monetary Fund) members of the world delegated universal coin trading policies throughout their nation. Shortcomings and other inconveniences for the United States only hindered the little progress America as a nation was making compared to the Eastern world. As the US began its slow recovery, they finally took a strong foot forward and finally made a headline negotiation. In 1979, around 40 years after the war, the United States began one of the most expensive and complex economic relationships the world has seen thus far: the Chinese – American entanglement.

Following a period of war and dispute across the mid-1900s, the US and China finally mended their political relationship. Conflicts such as the Korean War had little to no importance at this point, and both nations seeked greater trade opportunities with nations of the other side of the world.

The first action of this occurred in 1972, where current president Nixon visited to evaluate certain issues at the time, such as Taiwan. After the success of this meeting, their first substantial policy was achieved: the Taiwan Relations Act in 1979. This policy allowed for commercial and critical relations between the two groups.

Later in the early 80s, the two countries pushed for further establishment of their partnership and began trading military equipment. Following a brief period of turmoil between China and NATO over an issue in Belgrade, the two countries established their first formal trade agreement: the US – China Relations Act of 2000. This extremely influential act granted Beijing “permanent normal trade relations with the United States,” eventually leading China to join the World Trade Organization in 2001.

Between 1980 and 2004, their net exports rose from $5 billion to $231 billion, an increase of around 4,500%. This boosted the import and export profiles of both nations, where China became the second largest trading partner of the United States at the time behind Canada. The  below shows data on how reliant the US became reliant on international trade for the economy, showing spikes in the year 1979 and 2000; furthermore reflecting their agreements with China. The graph demonstrates a positive trend that continues into times today. 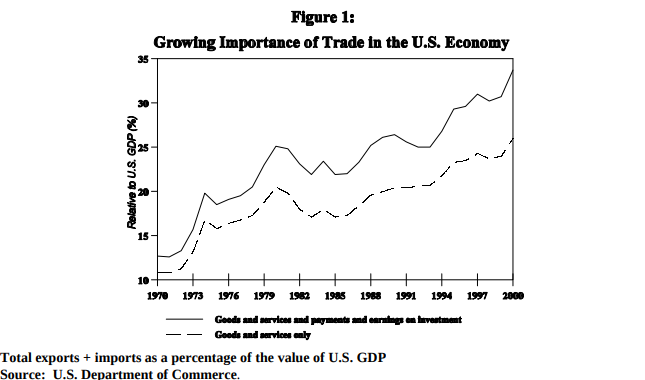 China continued to make money off of the United States and its other trade partners, where in 2007 they significantly increased their military budget with the aim to “protect national security and territorial integrity.” This simple budget increase in the military is one of the many places the United States’ money was shifted between within China’s infrastructure; their money developed not only their trade network but the general benefit of the nation. The US became extremely reliant on Chinese imports, and began to develop debt to their new partners. In September of 2008, the US had a debt of around $600 billion. American leaders began having concerns about their economic imbalance with China, the kindling financial crisis brewing in the United States’ global trade.

Along with China, the US suffered under debts between other countries of the world, where their exports did not recover the expenses of various goods that the rest of the world possessed. Unfortunately for the US, their market did not provide for the illustrious spices, oils, and resources that were unique to other places. Southeastern Asia and the Middle East had goods that were desired around the world, therefore allowing their imports to massively increase. The graph displays this increasing debt held by nations involved in trade with the United States. 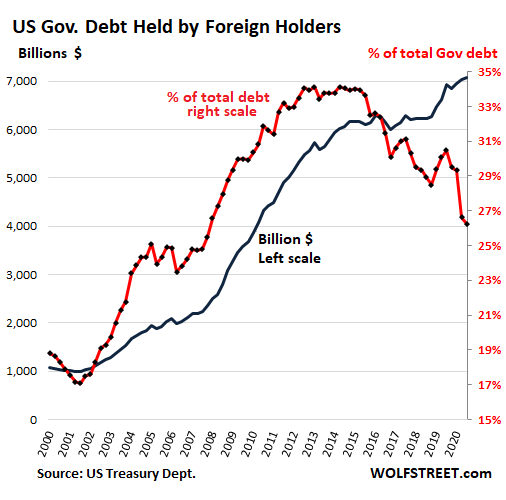 The goods exported from the US were simply not captivating. The resources that left the country did not appeal to foreign governments; the exports of the United States only generated appeal in quantity not quality. Compared to the older spice trade and current oil trade of the Middle East, the US is working much harder to procure their resources in reference to the Middle Eastern nations that already have a large portion of their product naturally occurring.

Over $1.8 trillion of export revenue comes from industrial supplies and materials as well as over another $2.3 trillion in capital goods and the automotive industry. Although these numbers are presenting good overall evaluation, these imports are not unique; they’re generic. Numerous other nations include similar if not the same products in their import in similar distributions. Notably, China themselves lead world exports in several of the categories listed. During the 2000s the US were losing significantly in terms of export profit on a yearly basis. Something needed to be done, fast. 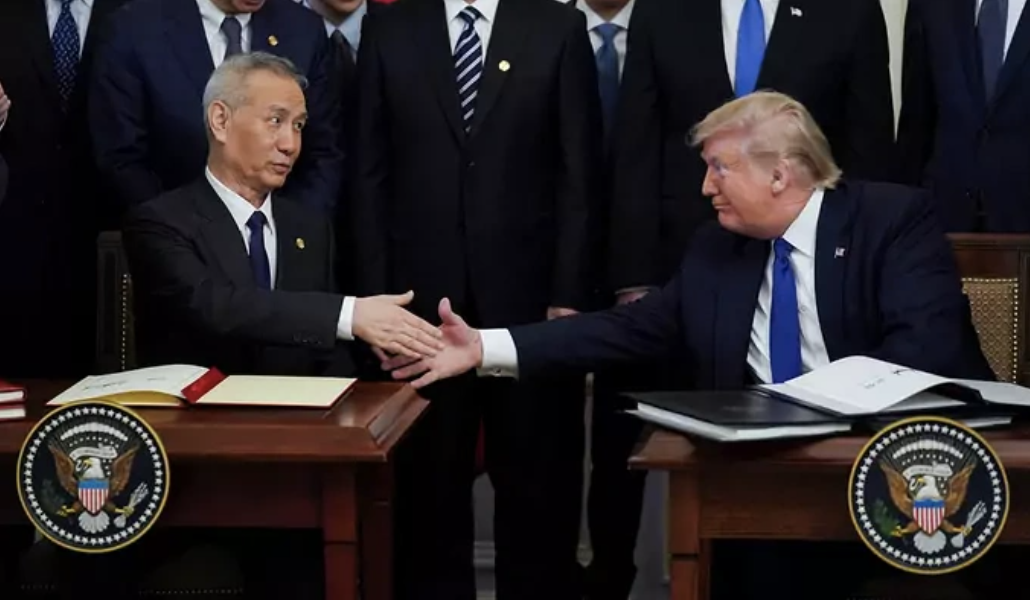 2010 was the year that the United States and China’s economic development began to visibly fork. It was in this year where China surpassed Japan as the second largest economy in the world behind the US. In the second quarter of 2010, their economy was valued at $1.33 trillion, compared to Japan’s 1.28 trillion. Analysis has shown projections that at the current rate of economic growth in China, they are set to overtake the United States before 2027.

The United States did not have a direct answer to this economically, but rather geographically. President Obama in 2011 decided to pivot marines toward Southern-Pacific Asia for ​​“increased investment — diplomatic, economic, strategic, and otherwise—in the Asia-Pacific region.” Obama’s act was analyzed to have no other real motive than to drag the political attention back to the US instead of the productive Chinese economy.

Later that year the US was under greater debt to China than ever before, reaching $295.5 billion from the peak of $273.1 billion in 2010. During a brief 5-year period, China went under new leadership and their trade with the US continued to favor them. This period of little to no entanglement swiftly transitioned upon the election of former president Donald Trump. Throughout 2018, Trump administered several tariffs against the Chinese, fining the nation around $50 billion and later another $34 billion, citing an acclaimed theft of US technology from the White House. This technology was intellectual and of great importance to the USA, leading Trump to instill the tariffs because of his belief in Chinese theft.

These tariffs targeted goods across the spectrum of exports, ranging from general clothing to hardware materials such as aluminum and steel. Turmoil between the two nations continued to grow, as May of 2019 brought a tariff increase from 10 to 25 percent on $200 billion worth of Chinese goods. In reaction, the Chinese Prime Minister commented that the US has “extravagant expectations” and will “trigger financial market turmoil.” An offer in retaliation was made by the Chinese to tax the US for $60 billion of their goods but this offer was claimed to be forced in favor of the US by President Trump.

This ordeal then led to an eventual agreement between the two parties to reduce the stress on both nations in early 2020. This agreement – “ECONOMIC AND TRADE AGREEMENT BETWEEN THE GOVERNMENT OF THE UNITED STATES OF AMERICA AND THE GOVERNMENT OF THE PEOPLE’S REPUBLIC OF CHINA” – significantly reduced the taxing of exported goods for both nation, easing some weight off of each county’s shoulders. The agreement forced a tax limitation and a validity check for particular listed HR-coded export goods. This ended the recent troubles between the two nations as they have resumed their trading since this point.

Irrespective to the long-lasting effects of the COVID-19 pandemic, the United States still faces great debt from recent trade endeavors. Although they have reformed ill-fated relations with other nations and developed tariffs across the board, their current steps will not match the missing money remaining. The United States has debt that simply cannot be resolved in a small time frame. China’s economy continues to flourish, and will very likely meet financial projections and become the world’s largest economy before 2027. The American debt fiasco has only proven the sheer effect of historical mismanagement, and America will need great work to recover from their errors and prove promising fiscal future and opportunity as a nation.