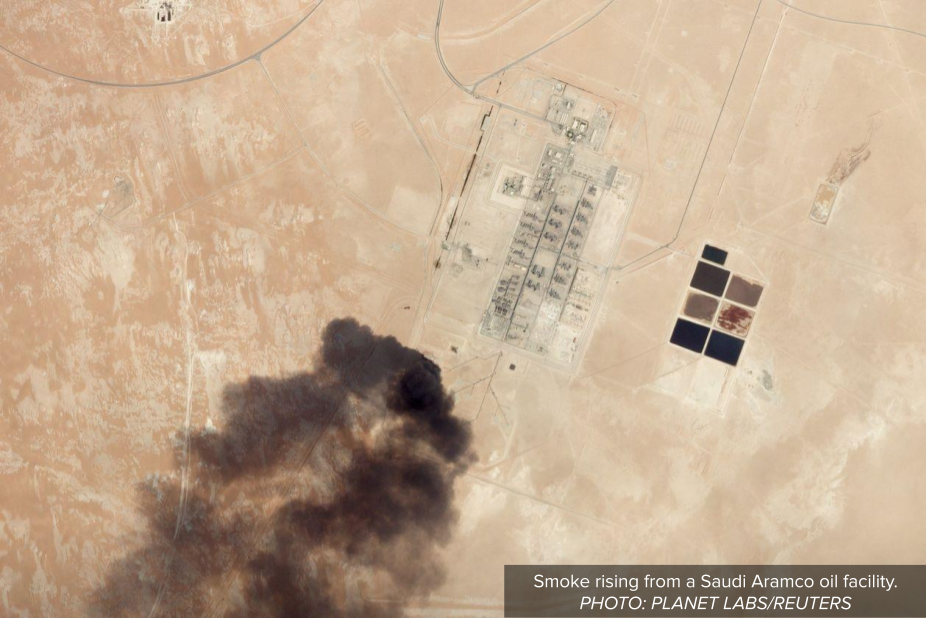 Saudi Aramco, the Saudi Arabian state-owned oil giant, was attacked by a drone strike this past Saturday. A group of Houthi rebels from Yemen have claimed responsibility for the drone strike, which affected two major Saudi oil processing facilities. But, the identity of those behind the attack is not yet clear due to conflicting reports from U.S. government officials. Aside from the political concerns of who is responsible, the attacks have vast economic implications.

The Saudi Arabian Oil Company, known as Saudi Aramco, is the world’s largest producer of crude oil. Crude oil is a natural resource with a wide array of applications, including the production of transportation fuels and plastic products. Crude oil is a commodity. Commodities are goods and services that people view as similar enough to not care about the producer or the quality. For example, coffee beans, which are commodities, that I sell are essentially identical to the coffee beans that anyone else sells simply due to their universal quality and similarity. Therefore, in commodity markets, the quality of each instance of a certain commodity is the same. Therefore, commodities trade primarily based on price, with supply and demand as the sole determinant of the price. That is important in understanding why oil prices moved the way they did.

Crude oil is measured in barrels. One barrel is equivalent to 42 gallons. The price value of a barrel of oil is subject to fluctuations, based on the supply and demand of oil. Generally, when something, like the attacks on Saudi Aramco’s facilities, threatens the supply of oil, the price of oil rises. That reflects the basic laws of supply and demand. Natural disasters, like Hurricane Harvey in southern Texas 2 years ago, and turmoil in an oil-producing region could disrupt the supply of oil and cause the price to rise.

Increases in oil prices will usually increase the value of oil companies. This is due to the fact that oil companies are primarily valued by their oil reserves. If a company holds a certain quantity of oil, and the price of oil goes up, the value of their reserve, and therefore the company, increases. The attacks on Saudi Arabia will presumably cause oil prices to increase. That will, in turn, likely cause the market value of publicly-traded oil companies to rise. However, the geopolitical climate in the Middle East, which may develop to further cut oil production and reduce oil supply, represents a risk to the global oil supply. There are also concerns that the industry may not meet global energy demand.

Benefits of Investing in Oil

There are a few reasons why an investment in oil could be beneficial for investors. First off, risk premiums on oil will continue to rise proportionally to the level of political instability in the Middle East. A risk premium is the extra return an investor will receive for holding a risky asset. The conflict in the Middle East is not going away any time soon, suggesting that oil prices will continue to climb in the future. The real kicker, however, is that oil’s risk is less than it appears on the surface. The world’s demand for oil will never go away, at least any time soon, meaning that oil will always remain a valuable commodity. Because of this, investors can feel more confident in investing in oil, with rising risk premiums as a bonus.

Investors must also consider what type of oil assets to invest in as well. Usually, this choice will boil down to an ETF or an oil production company. ETF’s mitigate risk by compiling a basket of stocks into one asset, protecting investors from the exposure found in solo production companies. ETF’s also tend to have generally higher dividend payments than production companies, but this is not always the case. Despite the obvious benefits of an ETF, investing in production companies can still be highly profitable.

Not to get too far into the inner mechanisms of the oil industry, but investors should look at investing in upstream oil production companies, which are generally more profitable than mid/downstream companies. This means the companies are involved in the direct extraction process of the oil, rather than being a middleman. Most of the most recognizable oil stocks, like Exxon Mobil (XOM) and Shell (RDS-A), are upstream production companies.

Risks of Investing in Oil

As mentioned previously, investing in oil can be especially risky when buying into production companies. These companies bear the risk associated with losing their oil supplies. For example, the Valdez Oil Spill of 1989 tanked Exxon Mobil shares (XOM) nearly 10%. These unpredictable incidents can be catastrophic to oil stocks and severely hinder your assets.

Another potential downside for investors is the existence of The Organization of the Petroleum Exporting Countries (OPEC). This international organization is comprised of 14 countries and controls 40% of the world’s crude oil, according to the U.S. Energy Information Administration. This level of control can potentially be problematic, as the organization can regulate oil prices with unrestricted power. This leaves investors vulnerable to sudden drops in oil prices. Further considering the fact that Iran and Saudi Arabia are both members of OPEC, it’s uncertain what will become of the organization if Iran were to be found responsible for the attacks on a fellow member. For investors considering investing in oil, keeping close tabs on OPEC will be an important aspect of asset management.

U.S. crude oil futures are up 11%. This means that oil derivative traders have anticipated that the price of U.S. oil will increase and buyers are willing to pay an 11% premium on the trade, given the foreseeable improvement. In simple terms, investors believe that the value of oil will increase significantly due to the events affecting Saudi Aramco.

Investors have long expected Saudi Aramco to file for an initial public offering. If it does, it would be the most valuable public company in the world. Likely, the current conflicts with their production and the disruption of their refining capacity will put a damper on the development of those plans. As of now, investors can expect oil shares to increase Monday with a high potential for further turmoil in the Middle East to ensue.