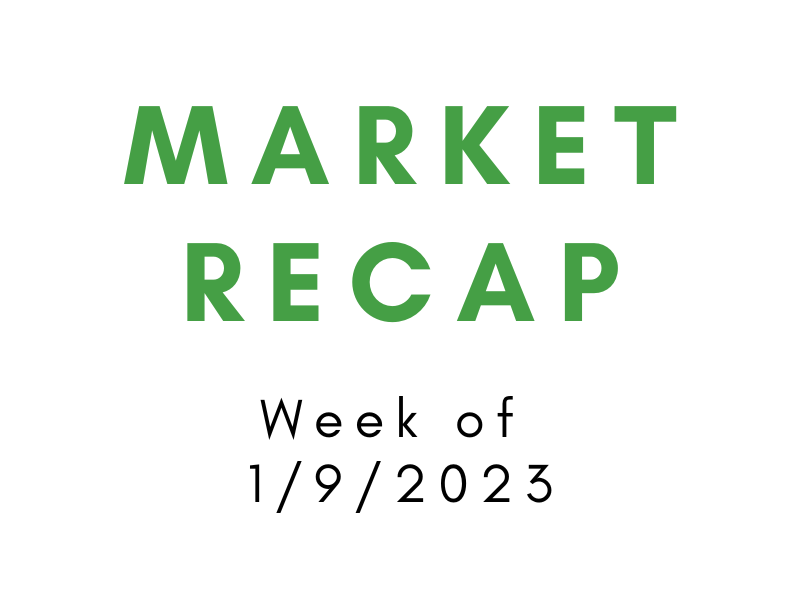 The major US stock indexes continued the momentum from last week’s positive results, as the NASDAQ, S&P 500, and Dow Jones finished up 4.8%, 2.7%, and 2.0% respectively. This is a sweet sight for the sore eyes of investors, as it marks a complete reversal from 2022, when the market finished with three consecutive negative weeks. New inflation numbers suggested increases in the Consumer Price Index for the month of December were the lowest of 2022, possibly signaling a slowing of inflation.

However, other news shows that four-quarter earnings fell around 3.9%, the first year-over-year decline since the height of the pandemic, all the way back in 2020. On the world stage, Bitcoin and Oil recovered this week. Oil eclipsed the $80 mark again, up around 8%, while Bitcoin rebounded to around $19,500, rising 15% on the week.

The CEO of Tesla, SpaceX, and Twitter, Elon Musk, has lost $200 billion in wealth, according to the Bloomberg Billionaires Index. This makes him the first person ever to lose this amount of wealth. The bulk of Musk’s wealth is tied up in Tesla, whose stock has plunged 65% in 2022 due to weak demand and competition in electric vehicles from established automakers. Evidence of car buyers’ sinking interest in Teslas became apparent after the company announced a rare sale in a bid to clear out inventory.

Critics have long questioned whether Tesla was ever worth the trillion-dollar valuation it had at the start of 2022. Musk’s $44 billion purchase of Twitter hasn’t helped Tesla’s stock or Musk’s personal wealth either. Critics have argued that Musk’s constant tweeting and increasingly erratic behavior has angered Tesla investors who want him to pay more attention to his significantly larger and more valuable company. Not only has Musk’s wallet been hurt, so has his reputation.

Wyoming’s legislature is considering a resolution that calls for a phase-out of new electric vehicle sales by 2035. The resolution was introduced on Friday by a group of lawmakers led by Senator Jim Anderson and has support from members of the state’s House of Representatives and Senate. The lawmakers argue that Wyoming’s oil and gas industry has created jobs and contributed revenue to the state’s economy, and that a lack of charging infrastructure within Wyoming would make the widespread use of EVs impracticable.

The resolution calls for residents and businesses to limit the sale and purchase of EVs voluntarily, with the goal of phasing them out entirely by 2035. If passed, the resolution would be entirely symbolic and would be more about sending a message to EV advocates than banning the vehicles altogether. The resolution alludes to genuine economic anxiety in the state, which is a significant oil producer and is home to one of the largest wind farms in the US. Though the decision has all the signs of a political show, it takes a stand at states like California that have outlawed the future sale of gas-powered cars.

For the second week in a row, the market experiences solid, positive growth while oil recovers. Imagine losing $200 and still being one of the richest people in the world, Elon Musk doesn’t have to imagine it because it happened to him. While states have banned the sale of combustion engine cars in an attempt to help the environment, Wyoming’s legislature is considering banning EVs in a startling new turn.

How and Why Inflation Has Risen