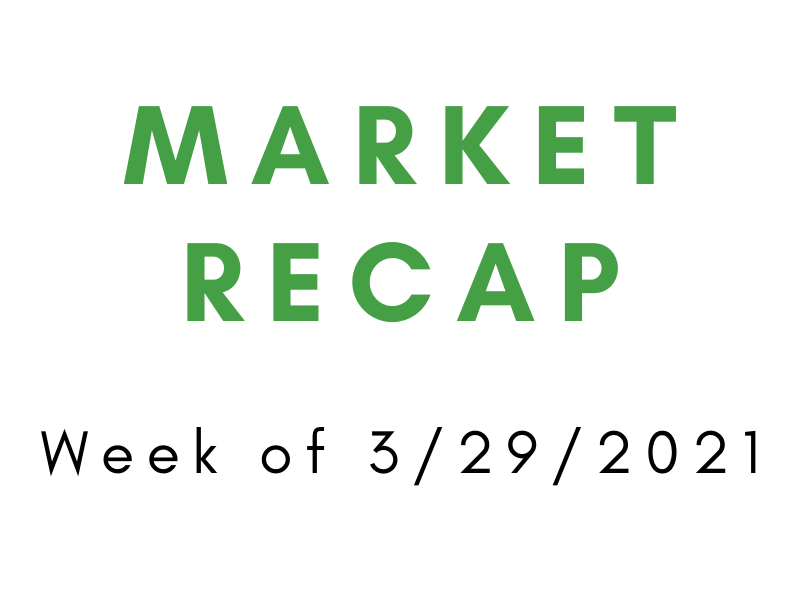 1. Growth and Tech Stocks Back on Solid Ground

Tech investors were able to finally catch their breath during this week as the Nasdaq outperformed other indexes and finished the week 3% higher. From the outside, it appears as if the feud between the rising Treasury Yields and high-growth stocks has settled. Volatility in the market has been at a 14-month low while large-cap growth stocks outperformed value stocks for the first time in 9 weeks. The Dow Jones and S&P 500 finished in the positive as well, marking a solid recovery week for the market in a trading week shortened by holidays. The S&P 500 also eclipsed the 4,000 point mark for the first time on Friday.

In other pleasant news, women have put the economy and schools on their backs like Steph Curry for the Warriors, as 492,000 women reentered the workforce (mostly in education). The strong recovery in the labor market is symbolic of the rising efforts to reopen the country and the efficacy of the vaccine distribution which makes it safer to return.

After two months of a steep decline in COVID cases, infections, hospitalizations, and death, all statistics are back up on the rise again. The number of cases per day in this past week was 20% higher than two weeks ago.  Many epidemiologists warn that another surge could happen, but they do believe that this next surge will pale in comparison to the past spikes in cases. The primary causes behind this spike are likely states loosening restrictions, while fatigue related to the pandemic about precautions leads to a less safe environment.

Some polls report that the number of people that take mask-wearing, hand-washing, social-distancing, and quarantining seriously have decreased significantly in the past month. As politicians try to reopen their state to increase revenue and bring prosperity, they might end up doing the opposite. Additionally, the extremely contagious COVID variant B.1.1.7 is 50% more infectious than previous cases, and this could produce more cases in the future.

3. Biden: Man with an Infrastructure Plan

The headliner for the show that is political news this week was Biden’s infrastructure proposal and its effects. The plan, named the “American Jobs Plan” proposes the spending of $2.25 trillion over 8 years on R&D, clean energy, infrastructure, and other sectors that will bring many jobs to Americans. The plan is split up in 6 main ways:

One question looms over the mind of all Americans: who is going to be paying for all this? For the team wanting higher taxes on big corporations, Biden hit a home run as he plans on increasing corporate tax rates to 28% from 21% to fund the proposal. In the short-term, corporations on the stock market will take a one-time hit as their earnings will fall in a fiscal quarter. However, after this first quarter, investors will adjust estimates accordingly and everything should remain the same.

In the long-term, if the money is allocated where it’s needed and split between the 8 years, it could encourage economic growth and prosperity for the near future. One important thing to remember in all situations is inflation. Like a nagging younger sibling, inflation always presents itself when the economy is growing quickly. The influx of this $2.25 trillion dollar package into the economy could cause the dollar to decrease in value even more than it already has in this past year.