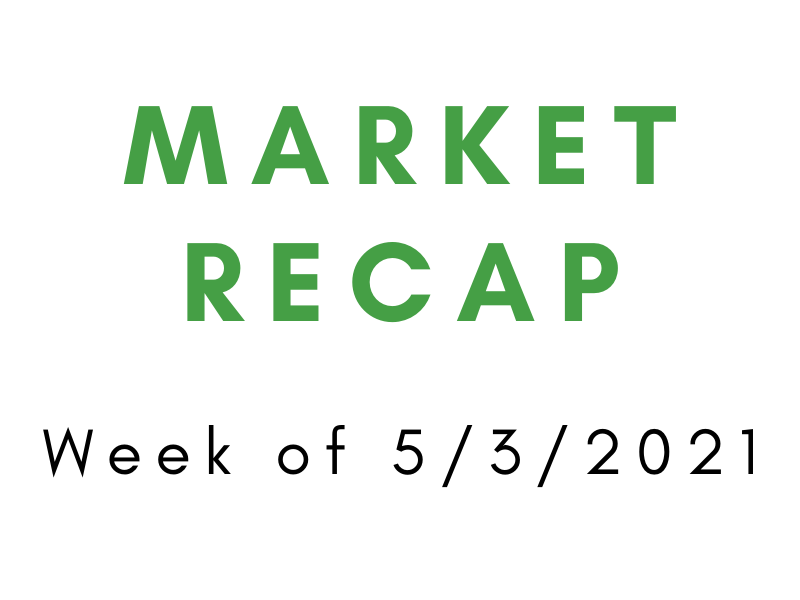 Put simply, investors had a case of mixed feelings this week in the market. The Dow and S&P 500 recorded substantial gains hitting all-time highs, flexing on the tech-dominated NASDAQ, which fell more than 1%.

Jobs weren’t great in April, as the economy added about 75% fewer jobs than the predicted total of around 1 million new jobs. Just imagine thinking you would get a 100% on a test, but you instead got 25% and it’s not curved. Additionally, unemployment rates crept up by around a tenth of a percent last month. However, most analysts believe this is just a road bump in pandemic recovery rather than a turn for the worse.

The jobs report wasn’t the only economic news that dismayed investors as manufacturing activity has continued to fall as the service sector has also experienced a downturn. In the midst of these less than exciting economic figures, the corporate earnings surge was a sight for sore eyes as the S&P 500 earnings are projected to finish at around a 50% increase from last year, a 25% gain from what analysts predicted.

Around 80% of people over 65 in the US have been vaccinated partially or fully, but only 33% of young adults aged 18 to 29 have received a dose. These lower numbers in young adults don’t seem to be making a significant negative impact as the reported cases decreased 13% from last week. To add to the number of young individuals vaccinated, the Pfizer vaccine will likely be approved on Wednesday for children aged 15 and older after the clinical trial results come back positive. These vaccine trial results could not come at a better time as children have started to make up more and more of the COVID-infected. For example, 26% of the new COVID cases in Colorado are children.

In other vaccine news, a Chinese vaccine was approved by WHO, marking the first time a vaccine developed outside the Western world was approved for action.

In every town and city in America, homes are in bidding wars where houses are routinely closing $20K above their original asking price. Particularly during the pandemic, when many families are moving into bigger suburban houses for virtual learning or trying to take advantage of the rising prices, demand is skyrocketing. This in turn artificially inflates the speed at which houses are sold, creating a vicious cycle where demand is outstripping supply. Buyers are also getting creative, as there was even a buyer who went as far as to give the seller a PS5 (we know how in-demand they are).

Other times, sellers offer prices over the buying price before bidding even occurs. The last time this happened was in 2006 and the Great Recession followed. When this happened, buyers dumped their homes for bottom dollar and it got bad quickly — similar to how the Patriots played this year after Brady left.

However, this recent boom in prices isn’t unwarranted and could be a sign of promising times in the future. With mortgage rates at historic lows, people are able to cheaply finance homebuying and people paying in cash are less likely to default. However, no one doubts that housing prices have severely outpaced wages in the past years, so when mortgage rates rise, the housing market might slightly deflate.