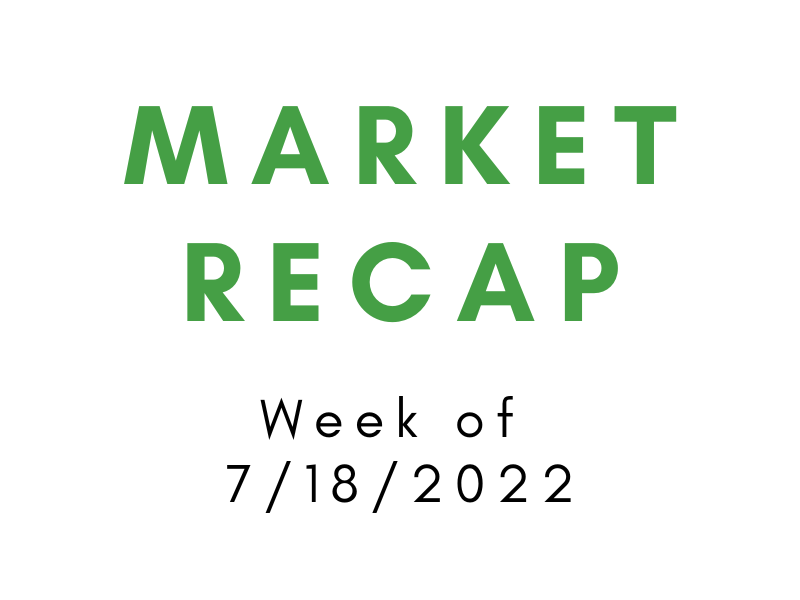 The past week in markets recapped in three short headlines.

Slowly but surely, the US market climbed back this week. All indexes made modest gains as the S&P 500 increased 2%, the Dow Jones gained 2.6%, and the NASDAQ rose 3.3%. Though the market has been trading in a pretty narrow range, the S&P 500 is up 8% since its bottom in June.

The beginning of the earnings season wasn’t the catalyst for the market’s forward movement surprisingly, as companies overall have underperformed compared to previous quarters. This is likely due to the result inflation has had on profits and the price of resources. Pouring on the bad news, 251,000 Americans filed for unemployment this week, continuing a three-week trend. The weakened labor market might indicate the US economy is slowing down, especially after the subpar earnings results.

With inflation persisting, the Fed is widely anticipated to announce another, even larger rate hike. The last rate hike was three-quarters of a percentage point, the highest hike since 1994, and some economists believe this next hike could be even higher at a whole point.

US Treasury Secretary Janet Yellen told reporters that the US economy was slowing and that she did acknowledge the risk of a recession in the future. However, she also stated that the economy wasn’t in a recession at the moment, as shown by promising consumer spending and hiring numbers. July was the 4th consecutive month where the number of hirings exceeded 350,000, an optimistic statistic amidst inflation concerns and a downturn in business output.

Yellen said the economy was “in a period of transition” that was both “necessary and appropriate.” This may be true, but the number of unemployment benefits claims is on the rise and the labor market is weakening. Yellen also stated that the Fed’s actions were slowing down inflation and trying to bring prices down. The government has also begun to sell oil from the Strategic Petroleum Reserve, lowering the prices at the pump for consumers across the country by more than 50 cents in most areas.

The blockbuster deal between Twitter and Elon Musk has collapsed. Once a topic of all investment companies and news outlets online, the deal to buy Twitter has once again come to the front of investors’ minds. Elon Musk recently stated that he wanted out of his $44 billion deal to buy the social media company, citing Twitter’s failure to comply with contractual obligations as the reason for his decision. However, it won’t be as easy as just saying Musk wants out.

Twitter’s board chair Bret Taylor stated that Twitter would seek legal action to force the deal to go through. Musk representatives stated that Twitter misrepresented the number of monetizable users and this negligence poisoned the deal. Right after the announcement, Twitter’s stock dropped 6%. The Tesla CEO agreed to originally buy the stocks at $54.20 a share, but the stocks now trade just above $39. Though legally this isn’t a reason to back out of the deal, it encourages Musk to abandon his decision to buy Twitter as he thinks his shares would be immediately devalued.

The market climbed back this week with modest gains amidst a rough start to the earnings season. Treasury Secretary Yellen acknowledged the economy was slowing, but stood firm in her belief that the US economy was in a recession. Twitter and Elon Musk might’ve just broken up.