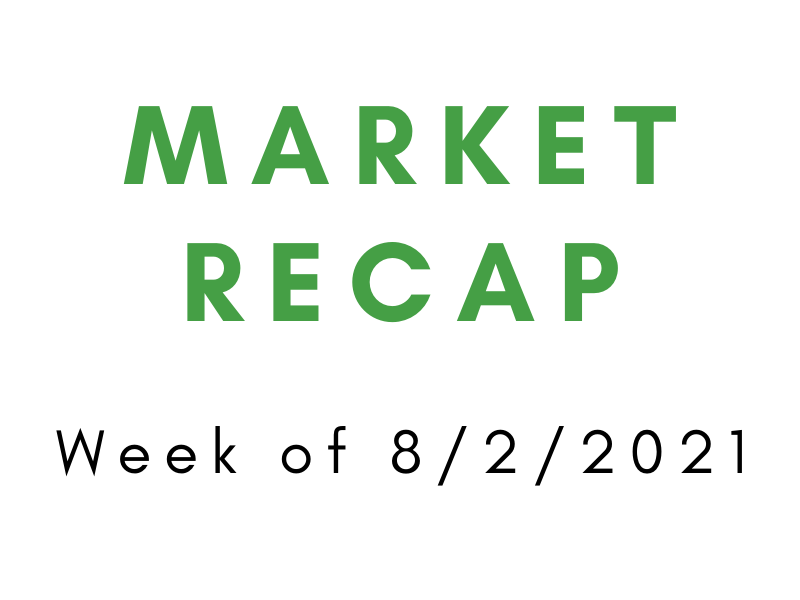 All three major US stock indexes rose around 1% pushing their all-time highs and recouping the losses from the previous week. Though bond prices fell this week, yield rates only increased to 1.29%, a far mark from the recent high of 1.74%.

On the other hand, Bitcoin is increasing significantly — now upwards of $40,000 but still markedly less than its all-time high set earlier this year. Economic expansions, especially once in their beginnings after a dip or crash are easy to scare. Many investors can and have been spooked by various events throughout history.

In 1994 it was the Fed Scare, in 2010 it was the double-dip recession fears, and now it’s the Delta Variant and rising inflation. However, the promising July jobs report, showing a total of 943,000 new jobs, may have eased concerns about the strength of the economic recovery.

Back in Washington, Biden has pushed $1.1 Trillion infrastructure into Senate negotiations where it is projected to move into the House. The plan will provide new jobs and reinforce the foundation of the country, serving on two fronts to help the recovery of the US.

2. All Your Eggs in One Basket

Everyone has heard the saying don’t put all your eggs in one basket, but Marc Andreessen believes the opposite. Andreessen has made his impact on Wall Street by being a legendary Tech VC, backing companies like Twitter, Facebook, and Clubhouse. He learned this piece of information from Berkshire Hathaway CEO Warren Buffet. Buffet has been quoted saying “Keep all your eggs in one basket, but watch that basket closely.” Andreessen believes this investing style is sound for many investors if they “know what they’re doing and know the nature of what they are investing in.”

The approach Buffett takes is known as value investing, the opposite of what many young investors try to do today by investing in cryptocurrency or get-rich-quick investments. However, not all of their views are similar. Buffet believes Bitcoin is a worthless delusion, calling it “rat poison” on occasion, and has predicted digital assets will eventually fail. On the other hand, Andreessen doesn’t share that particular view, saying he takes crypto “very seriously.” Andreessen also believes that putting money in an index fund is the way to go, telling investors “don’t get fancy.”

If you’ve turned on your TV at all during the last few weeks, the chances you’ve heard about the Delta Variant are quite high. Accounting for 83% of the nation’s COVID cases right now, the Delta Variant is more contagious and potentially deadly than the original COVID strain that caused the pandemic. Besides the worry that the Delta Variant will cause another mass outbreak, it primarily hurts the economic recovery in one way: supply. For example, the chip shortage which makes finding chips for cars and PCs near impossible is due in part to the pandemic.

In general, many Asian countries which are behind in vaccinating their population are disrupting supply chains essential for the aggregate supply of goods. These breaks in the system are like debris caught in gear or an electronic device. When the whole system is interrupted, price spikes and shortages are bound to happen. In turn, this creates a ripple effect and slows the economic recovery entirely.

The July Jobs Report shows promising growth in a time when investors thought the economic recovery would be slowed by the Delta Variant of the feared Coronavirus. Warren Buffett and Marc Andreessen believe that you should put all your eggs in a single basket, going against the popular theme of diversification. The Delta variant will hurt supply and will make buying a new car more expensive than you would ever expect.