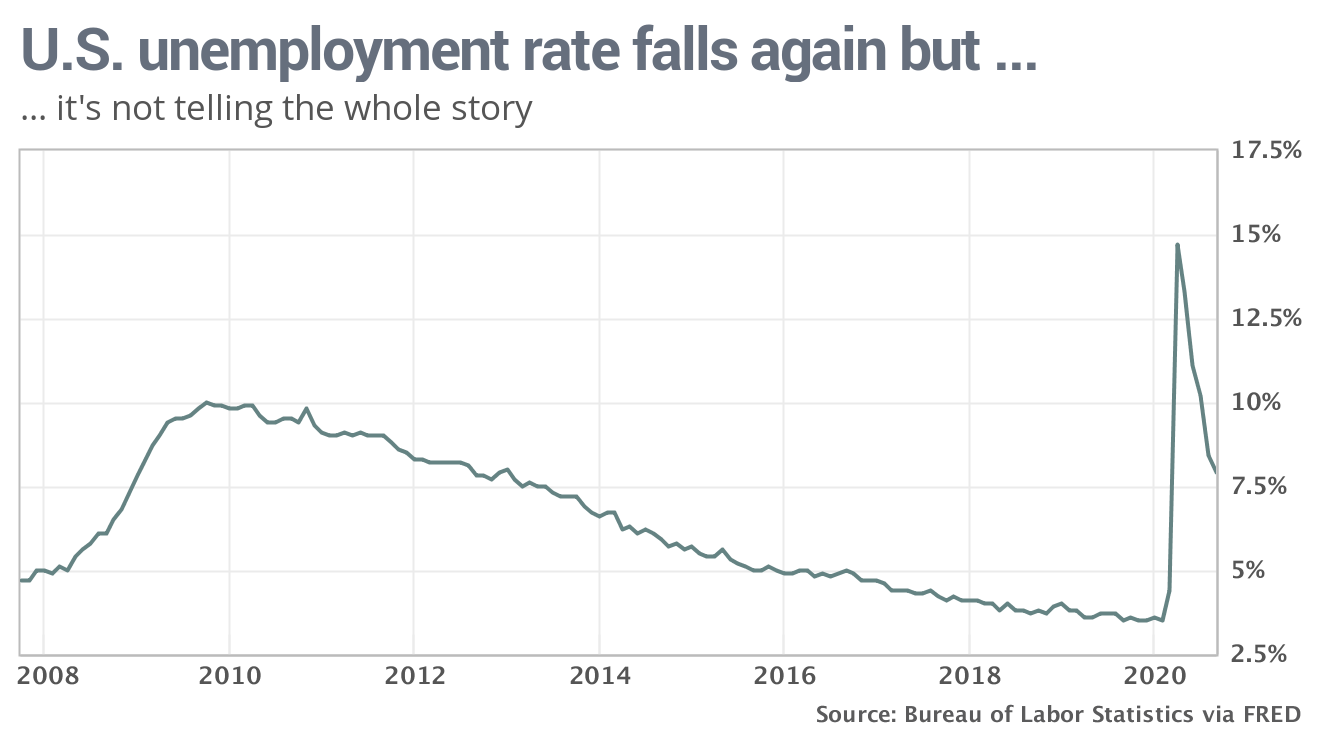 Happy October! This past week broke the losing streak of the S&P 500 as it finished 1.52% higher for the week. The NASDAQ finished 1.48% higher as well. After 4 consecutive weeks of finishing lower, this past week’s developments could indicate that investors are seeing some signs of strength. The fact that the House added passed a new relief package earlier this week has provided some calm to investors who feared that stimulus was either not going to continue or if it was to continue, it would be significantly less than the stimulus that caused the market to soar from its lows in months prior.

The House passing the relief package especially helped after a weaker-than-average unemployment figure from September came out (explained below). The big tech stocks went up for the week, as did financials. As we come closer to the election, expect investors to react to that news more than other news. Even though many great investors have said that the stock market and economy typically are independent or agnostic of any swings in the Presidency in the long term, for various reasons, this year’s election seems to be approached differently by investors.

It’s been about 9 months since the first case of coronavirus was diagnosed in the US. According to the CDC, we’re at over 7.3 million cases in the US, and have close to 209,000 deaths. The worldwide total for deaths passed 1 million last week. Just this past week, there were about 301,000 new cases in the US. This is a a small decrease from the prior weeks which saw closer to 312,000 weekly cases.

Obviously, the biggest news is that Trump and several others in the White House contracted the virus this past week. Volatile markets followed on Thursday and Friday as that news scared investors. Mixed signals from Trump’s medical team have also created more confusion over the weekend. This is manifesting itself in more volatile markets heading into Monday. This comes as states have started locking down certain areas again. For example, NYC is closing down 9 areas that have seen a resurgence in COVID cases. We’ll be covering this more as the news surrounding Trump’s condition begins to have more of an impact on markets.

Wall Street expected about 800,000 new jobs to be added, but only 661,000 were to get an unemployment rate of 7.9%. But something interesting has happened with the labor market. The way the unemployment rate is calculated is by dividing the unemployed by the total labor force, which includes the total available number of people either working or looking for work. Read up on it here: Intro to Unemployment.

Basically, even though the unemployment rate fell from 8.4% to 7.9% this past month, the labor force reduced as well. 700,000 people stopped looking for employment this past month, reducing the labor force. In essence, when you stop looking for work, the government won’t count you in the labor force when calculating the unemployment rate. You may have become discouraged and disheartened due to the lack of opportunities available or you may have just decided to stop finding work. Either way, you are no longer part of the workforce. More people decided to do just that than the number of people who actually found a job. That means our entire labor force reduced by about 40,000 people.

Since February, 4.4 million stopped looking for work, meaning they are not part of the unemployment statistics. In a normal economy, that number would initially be startling, but probably attributable to something other than a global pandemic. It’s more likely that these 4.4 million want to still find a job but feel very discouraged to do so due to the world we currently live in. The total number of unemployed people was 12.6 million in the government’s September report. The labor force was 160 million.

So, doing some quick math, we can see that the total unemployment rate really could be (12.6 million + 4.4 million) truly unemployed divided by (160 million + 4.4 million) truly in the labor force. That would simplify to 17 million unemployed divided by 164.4 million, or about a 10% unemployment rate. Compared to the 7.9% figure that came out, it paints a more dreary economic picture that investors have become increasingly worried about.