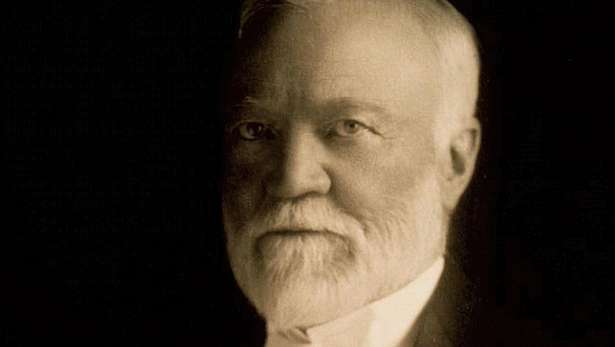 The US is built on the American Dream: the idea that no matter where you’re from, hard work can make you a success. Andrew Carnegie (1835-1919) personified this ideal. Carnegie came to the US with his family in 1848. They were broke — the move was paid for with borrowed money. Just a few decades later, Carnegie sold his steel empire for $480 million.

Andrew Carnegie was born the second son of a poor family in Dunfermline, Scotland. When Carnegie was 12, his family emigrated to the US in search of a better life. In the US, he found employment in a cotton factory. This first job paid him $1.20 ($35 in today’s money) for 70 hours of work per week. He went on to hold a variety of other posts, including messenger in a telegraph office and telegraph operator for the superintendent of the Pittsburgh division of the Pennsylvania Railroad.

In 1859, at just 24 years old, Carnegie succeeded his boss as railroad superintendent. While in this position, Carnegie made a number of profitable investments in coal, iron, and oil companies. He also invested in the Woodruff Sleep Car Company (the original holder of the Pullman patents), which brought the first successful sleeping car to American railroads. Carnegie left his post in 1865 as a wealthy man.

Seven years later, Carnegie constructed his first steel mill. The mill produced a large profit through a combination of low wages, investments in the latest technology, and efficient organization. This success allowed Carnegie to buy nearby steel mills. Carnegie minimized inefficiencies through ownership of the transportation infrastructure associated with steelmaking — not just the production facilities. (Today, this is called “vertical integration”.) In addition, innovations in steelmaking throughout the 1880s allowed technology to replace skilled labor and improved steel quality, further improving profit margins.

Although Carnegie considered himself a man of the people, his reputation was tarnished by the Homestead Strike in 1892. When union members at one of Carnegie’s largest mills went on strike to protest pay cuts and working hours, the manager of the mill simply fired the unionists. They proceeded to storm the steel mill, and a bloody battle broke out between the unionists and 300 armed guards. Ten men died and 8,500 soldiers of the state National Guard were called in to regain control of the steel mill. Carnegie pleaded his innocence and stated he was no longer involved in day-to-day business operations at this time.

Yet Carnegie’s steel empire continued to grow. By 1900, Carnegie Steel was earning $40 million in profits annually, $25 million of which was Carnegie’s share. Carnegie sold his company for $480 million in 1901, marking one of the largest business transactions in the early 20th Century.

… And Gives it Almost All Away

Following the sale of his company, Carnegie dedicated his life to philanthropy. Years earlier, he had penned an article titled “The Gospel of Wealth”, in which he stated that the wealthy had a moral obligation to give their money back to others in society.

In the last 18 years of his life, Carnegie gave away $350 million ($5.3 billion in today’s money), or almost 90% of his fortune. He established charities dedicated to research in science, education, and world peace (many of which still exist today). He became the largest individual investor in public libraries in American history, funding the establishment of more than 2,500 public libraries. Carnegie also built enduring landmarks, such as Carnegie Hall in New York, the Peace Palace in The Hague, Netherlands, and founded Carnegie Mellon University, which remains one of the world’s best colleges.