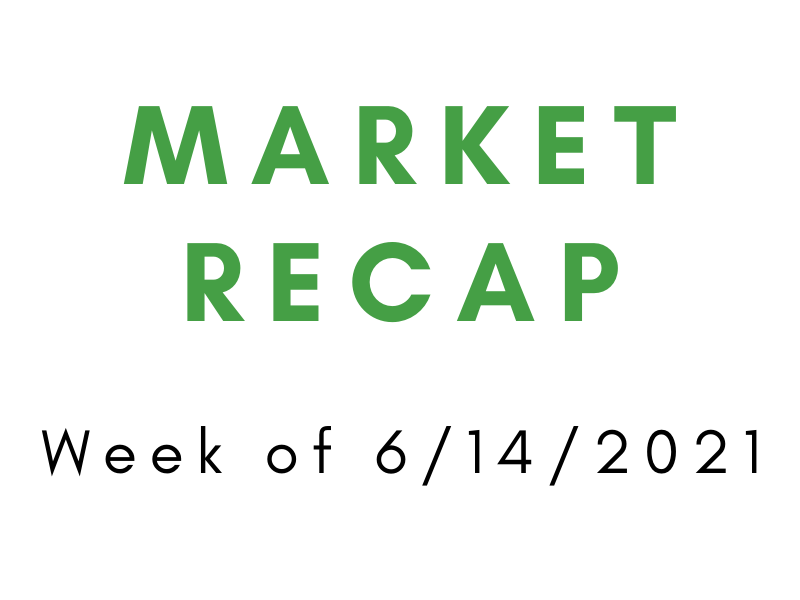 1. Inflation is Kind of Annoying

The market’s red hot ascent slowed down after investors succumbed to inflation fears this week. Investors hit a serious rough patch as the S&P was down 1.62% and the Dow Jones was down more than 3%. The NASDAQ survived the bearish onslaught, only ending with a marginal loss of 0.5%. Like the Hawks’ surprise upsets over the 76ers, the Fed raising inflation expectations and indicating 2023 rate hikes were unexpected for most investors as soon after the news was announced, all three major indexes tumbled.

This Federal Reserve news doesn’t just affect the stock market as the dollar rose nearly 1% in value while gold lost 4.5% of its value. With the Fed’s reality check on inflation, the second half of the year is likely to be a much bumpier road than the record-breaking ascent of the last few months.

In other news, retail sales fell 1.4% in May as customers spent their money on restaurants and travel rather than in department stores. On Friday, which is one of the quadruple witching days of the calendar year, the market also trended downwards. “Quadruple witching” refers to a day where futures, options, index options, and single stock futures expire. This leads to massive amounts of buying and selling market positions

After reaching a peak of $63,000, investors were biting their fingers for not buying Bitcoin. Now, these same investors are counting their blessings as they avoided significant losses. Bitcoin sits at $35,600 as of June 19th and has settled around price to the dismay of those who bought at the peak.

During crypto’s wild ride of volatility, Warren Buffett has made his opinion on cryptocurrency known. Buffett believes buying Bitcoin is “probably rat poison squared,” even at the current “bargain” price it is at. The Vice-Chairman of Berkshire Hathaway, the company Buffett leads, called cryptocurrency “disgusting and contrary to the interest of civilization”. Additionally, Buffett has stated more than once that he’ll never own crypto and avoid it like the plague.

If you understand Buffett’s investing style, his distaste seems more than reasonable. Buffett prefers stocks whose value comes from producing things wanted or needed, like Coca-Cola, for example. He also doesn’t like crypto as he feels like it doesn’t meet the criteria of currency. Currency, as many economists believe, must be a 1) durable means of exchange, 2) a store of value, and 3) a unit of account.

Finally, Buffet simply doesn’t understand crypto and views it as a gamble. Whether or not Buffett is right, cryptocurrency has been gaining traction and has long-term believers. There have been some who have made millions off of cryptocurrency, but as Bitcoin’s rollercoaster ride has shown, but for every seeming crypto-millionaire, there are many crypto-losers.

Though smaller than the size of a Gatorade Bottle cap, semiconductor chips and their recent shortages are bringing phone, laptop, and car production to a standstill. These small bits of silicon are the backbone of the nearly $3 trillion tech industry. During the pandemic, you wouldn’t be alone if you spent more of your free time than normal online. The increase in demand for cell phones and laptops during COVID essentially used up the supply for semiconductor chips to the point where production couldn’t keep up with demand. Additionally, the recent hype surrounding crypto has led crypto miners to use an increasing number of chips to boost production and profit.

All these sources of chip demand might mean when you go to your local dealership to pick up a new whip, you might be disappointed. Many cars are just parked in lots waiting for the essential chip to arrive before they are sold. Global consulting firm AlixPartners said chip shortages might cost the auto industry $110 billion this year. Production of cars this year has also fallen by more than a million fewer vehicles. With high demand and low supply, car prices are high and new cars at reasonable prices are hard to come by.

To get around the chip shortage, some manufacturers are reducing features. For example, Tesla has taken out passenger-side lumbar support. So if you’re excited to buy a car after getting your driver’s license, you may find your personal electronics and cryptocurrency are to blame for high car prices.

After the Fed Reserve increased inflation expectations and reduced the timeline for yield rate hikes to 2023, the market tanked. Many, including Warren Buffett, are doubting whether Bitcoin and crypto are worthwhile investments. Record demand for semiconductors in personal electronics is reducing the supply available for cars, increasing their price and are causing car prices to spike.