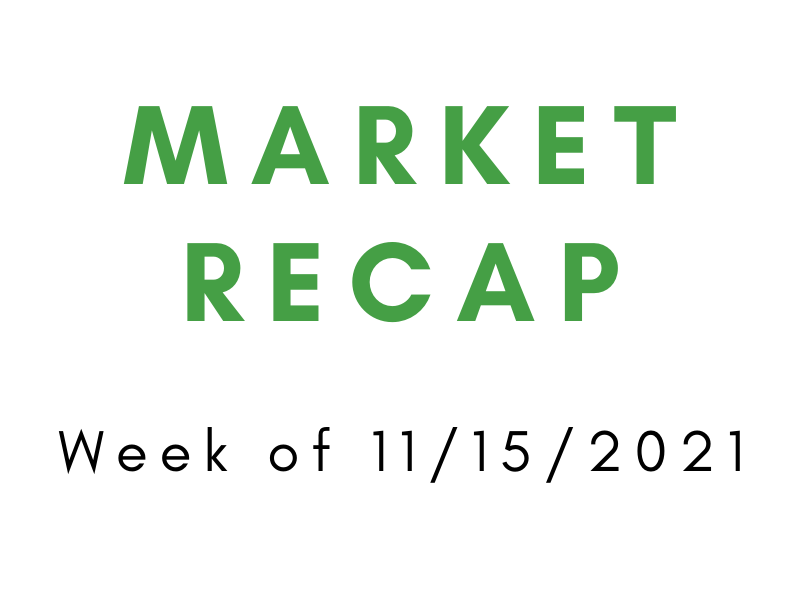 The market was mixed this week as the S&P 500 and Nasdaq were slightly positive and the Dow Jones slipped after pullbacks in energy and materials. Like presents for the fast-approaching Christmas, the earnings season has been wrapped up and proved just how fast the market has been growing. On average, companies grew 39% from the same quarter in 2020 — the third-highest growth rate since 2010.

Despite the Delta Variant and inflation increases the costs of goods, consumer spending ramped up yet again in October showing strong resilience in the retail market. However, overseas, new variants are popping up and forcing some countries to plan for more restrictive policies to fight the virus’ spill. Investors must’ve slipped on an oil slick as the price of oil fell again this week to just over $75 a barrel, down 10% from its highs.

Back at home, Biden pushed through two major economic packages around infrastructure. He signed the $1.2 Trillion package into law on Monday. Lastly, in a holiday-shortened week, a frenzy of significant economic news will be released this Wednesday so keep your eyes out.

On Monday, Biden signed an infrastructure bill worth more than $1 trillion into law in response to the infrastructure of the United States. This plan puts over $500 billion into expanding broadband, transportation, and utilities, essentially connecting more of the country. Another $110 billion will be allocated to roads, bridges, and possibly improving faulty Amtrak lines.

Consumers, inventors, and the media are particularly excited about broadband as, during the pandemic, connection to the internet was like golden currency. People on the Hill believe that this plan could help better the lives of many Americans and is the first in many steps in fulfilling Biden’s promise to the people.

Though the funds will be spread out over 5 years and could be months since a major project starts, people on both sides of the political spectrum believe that it could help the country. Some investors believe that this deal might make inflation worse given the stimulus already implemented during the pandemic. However, many economists believe that its effect on inflation won’t be significant as the spending is spread out and some of the bill pays for itself.

3. Down the Chimney: How the Holidays Affect the Market

The week before the Holidays, whether that be Thanksgiving or Christmas always sees more movement than previous weeks. Known as the “Holiday Effect”, higher trading volume and returns are generally expected nearing a Holiday. During this upcoming week, Black Friday week to be specific, consumer spending can make or break a stock. If consumer spending is high, retail stores and the general market can soar.

However, if spending doesn’t meet expectations, a general decline is bound to occur. The spending also has an effect up until Christmas if investors believe it’s the start of a strong holiday spending season. With inflation and supply shortages increasing prices of goods, the health of the retail market going into Black Friday has been questioned. Either way, analysts warn that the gains experienced by Black Friday aren’t permanent or a sign of a stock’s general health.

The market was mixed this week as inflation concerns persist but earnings impressed. Biden signed into law a massive infrastructure plan affecting Americans across the country. Holiday shopping sprees are something everyone looks forward to, especially investors.