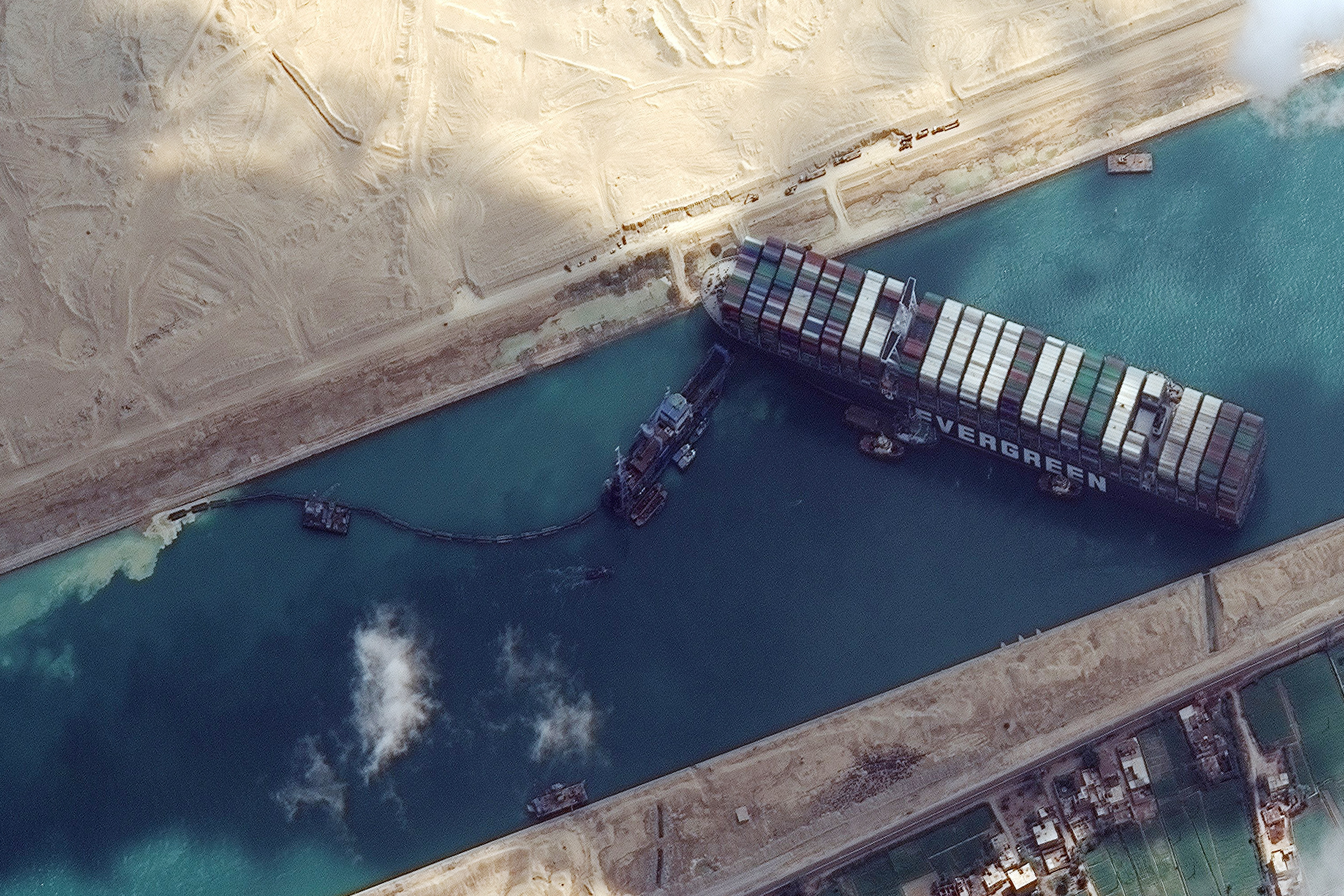 Ever Given container ship is pictured in Suez Canal in this Maxar Technologies satellite image taken on March 26, 2021. Maxar Technologies/Handout via REUTERS ATTENTION EDITORS - THIS IMAGE HAS BEEN SUPPLIED BY A THIRD PARTY. MANDATORY CREDIT. NO RESALES. NO ARCHIVES. DO NOT OBSCURE LOGO.â€(R)
Share this:

On March 23rd, 2021 a container ship called the Ever Given got stuck in the Suez Canal, a crucial waterway that connects the Mediterranean Sea to the Red Sea. This caused waves of adverse effects to the economies of hundreds of countries on both sides of the world. Four days later there were over 300 ships from both oceans queuing up to cross the clogged canal. Not until March 29th was there any more movement within the canal, but by then the damage had been done.

The Suez Canal is arguably the most important trading route in the world. It allows for easy access to Europe, the Middle East, Northern Africa, and connects roads all around the world. The Egyptian Suez Canal Authority oversees the canal, which finally cleared up on April 3rd. Over 12% of the world’s trade passes through the Suez Canal, making this disaster even more crucial to the world economy. The constant use of the Suez Canal aligns with the theory of globalism: a philosophy that aims for an interconnected world in which countries and businesses are reliant on others. Any small issue such as an ocean blockage can cause lasting effects.

The Ever Given, owned by Shoei Kisen Kaisha, is one of the largest container ships in the world. It was traveling through the Suez Canal when it was suddenly blown off course. The Ever Given had also been involved in the 2019 Hamburg allison, in which it allided with (running into a stationary object) and heavily damaged another ship. Experts say the Ever Given veered off course due to high wind speeds, a dust storm, and possible crew errors. Today, investigators are determining whether there were human or technical errors behind the ship failure. Certain factors, like size and shape, can be ruled out as possible reasons for the incident.

It is estimated that the ship held up around $9.6 billion of trade goods every day. That comes down to around $6.7 million every minute. German insurer Allianz estimates that the blockage could cost global trade anywhere from $6 to $10 billion. Countless European, Asian, and African businesses had to alter plans in order to account for the blockage. This added as much as eight days to their sea travel schedule, or forcing them to send goods by air, which costs at least three times more. This incident should serve as an example about the dangers of blocking any major trading routes, whether they be through the air, water, or over land. Any small disruption in the constant flow of transport throughout the world could hurt many companies and countries.

Many forward-thinking nations have utilized globalism as a tool throughout history, but it definitely has its drawbacks. It can lead to companies having an extreme reliance on foreign markets and buyers in order to remain viable. Globalism also creates costs of transportation and shipping to and from these markets. Within the context of the modern shipping industry, this means hours upon hours of sea travel with tons upon tons of product in their hands. Any small estrangement from the typical routine could put an intense stress on the deadlines that need to be met.

The Suez Canal is a perfect example of the shortcomings of globalism. The lack of self-reliance can cause major negative effects for public and private industries alike should something like this happen. Many well-run corporations don’t have the foresight to plan for an event similar to this. This can lead to mass expenditures and disgruntled clients. Even though globalism allows for a constant exchange of goods and services from across the globe, companies should realize that a single ship veering off course should not hold up billions of dollars of their products. They should have a viable back-up plan should anything like this happen in the near future.