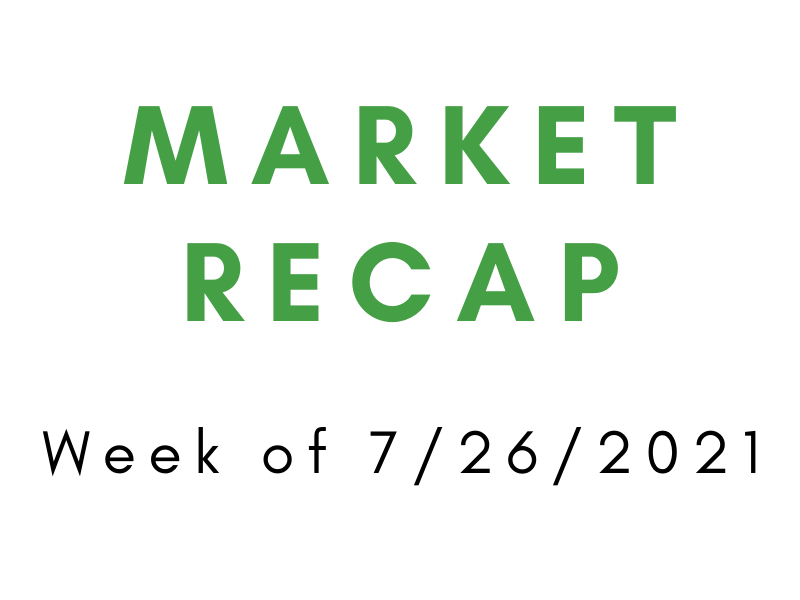 In a week of low-volume, midsummer trading, investors relaxed and enjoyed their summer break, allowing the stock indexes to retreat slightly from last week’s highs. The S&P 500 and Dow fell less than 0.5% while the NASDAQ fared slightly worse with a slip of around 1%. These minor losses were fueled in part by the continual rise of Delta Variant infection as well as a crackdown by the Chinese government on its tech companies.

However, like Robert Finke of the US unleashing an incredible last 50-meter comeback, earnings season has exceeded expectations and shouldered the burden of negative Covid news. Second-quarter profits from companies are now expected to rise 85%, the highest year-to-year total since 2009. For example, Apple posted a diluted EPS of 1.3, 100% higher than last year. AMD, on the other hand, reported an EPS over 340% higher than last year.

However, the market doesn’t always take earnings into strong consideration. While AMD’s stock price skyrocketed 15% since earnings, Apple’s stock has been relatively flat. Providing even more motivation for investors, Fed Chair Powell said plans to raise interest rates were “not on our radar screen.”

2. How Not to Predict Inflation

Howard Marks, the co-founder of Oaktree Capital Management and the 391st wealthiest American with a net worth of $2.1 Billion, believes predicting what will happen with inflation is impossible. We’ve all heard the quote “You miss 100% of the shots you don’t take” and some investors are taking this to heart.

In response to the current stream of trends, investors are jumping on macro forecasts and have a great deal riding on the future course of inflation. Marks believes the opposite, citing that it’s not possible to know where inflation and other macro trends are heading and that investors shouldn’t upend their portfolios.

With consumer prices in the US rising .9% in June, the fastest it’s been since April 2008, inflation is at the forefront of most investors’ minds. For investors that do feel strongly about the risk of inflation, Marks suggests that “investing in three areas – debt investments with floating rates, investing in businesses that can absorb cost increases (landlords, and deals where profits outpace costs”. Overall, Marks suggests that investors should consider the possibility of rising inflation, but not significantly allocate assets in response to macro expectations.

3. China Killing Competition, On and Off the Field

In Tokyo, China is killing the competition, leading the medal count with 21 gold medals. Outside the Olympic Village, their market isn’t faring so nicely. To outside investors, it’s clear what China’s priorities are, stifling economic competition from their own companies, specifically Big Tech Internet companies. Their biggest fear is allowing monopolies like the Big Tech of America including Amazon, Facebook, and Apple to gain too much control.

The leadership of China is essentially nationalizing thriving sectors and deciding what to do with the company’s profits. It wouldn’t be hard to see that Xi Jinping has decided capitalism isn’t the way forward for China’s success. Already, companies like Tencent and Alibaba have been hit by regulators claiming they’re becoming monopolies and these regulators have cut profit margins dangerously thin in some cases.

Jack Ma’s Ant Group, roughly a $37 Billion IPO was put on hold by China, as Xi wants China to control the internet and maintain its near system-wide control of its people. Overall, China’s actions have triggered a meltdown already costing its economy and investors $1 Trillion, and nothing seems to have changed.

In a boring week for the market, all three indexes face minor losses while earnings continue to exceed expectations. Howard Marks, legendary co-founder of Oaktree Capital, believes that predicting inflation and other macro indicators are impossible but that they are still important. Overseas, China is destroying competition in the Olympics and back home, they’re trying to destroy the competitiveness within its own countries.