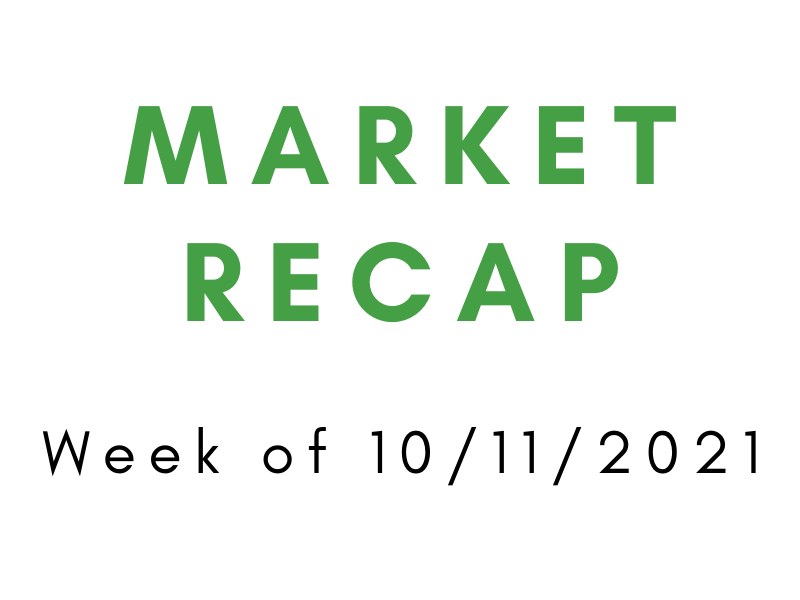 1. A Strong Week to Cap off Earnings Season

A strong start to the 3rd quarter earnings seasons provided a much-needed catalyst for the market as the major indexes all rose around 2% on the week. As of Friday, 80% of the companies that had reported earnings exceeded estimates. However, this only represents 8% of the total companies in the S&P 500, primarily including major banks.

Despite concerns over the Delta Variant and inflation, retail consumers stayed resilient and had continued to spend at a healthy rate in September. Some consumers might be engaging in “retail therapy” as we enter the holiday season — we’ll see if that actually happens. Though labor numbers came up short last month, for the second straight week, unemployment claims have decreased. Now below 300,000, this is the lowest rate investors have seen since before the Pandemic.

Due to labor shortages, rising energy costs, and disturbances in global supply chains, inflation has increased as the spike in consumer prices continued throughout September into the present. In other news, as of Friday, cryptocurrency investors will be pleased to see Bitcoin has risen above the $60,000 mark. Close to the high set nearly 6 months ago, Bitcoin has many investors hopeful of promising gains as it is already up 40% since the end of last month. Another commodity peaking at this time is oil. Up to $83 per barrel, this is the highest price of oil since 2014, nearly 7 years ago.

Since April 2020, the price of oil has rocketed upward. Already up to $80 a barrel, the price of oil hasn’t been higher since October 31, 2014. If that astronomical rise doesn’t make sense, it’s because the price of oil was negative during the pandemic. It might be hard to wrap your head around a negative price, in which manufacturers would effectively pay buyers to take the oil off their hands. The supply of oil was so great they were running out of places to store the oil. It’s a little more complicated than that, but that’s essentially why you might’ve seen negative oil prices. A total 360° turn from pandemic lows, the price of oil has risen to incredible highs due to the energy crisis limiting supply.

In turn, high gas prices will only make elevated inflation worse, squeezing the wallets of families across the US. Unfortunately, it might get even worse. Natural gas prices have increased so much that factories might switch to crude oil, eating up even more of the supply. In Europe, natural gas prices have gone from $2 per million BTU to $55. This makes oil much more economical and creates demand that isn’t normally there, which is bad news for American families wanting a full tank of gasoline. With demand outpacing supply, the price of oil is bound to increase, maybe even reaching $100 a barrel.

Sit back and let me tell you a story about one of the most infamous traders of all time: Navinder Singh Sarao. Out of his bedroom, Sarao caused a $1 trillion stock market crash. Legally, Sarao made $70 million from his home in England, but like many investors, he got greedy. He used spoofing to manipulate the market and rake in profit. Spoofing is where traders place thousands of buy offers and then cancel the order or change them right before they are executed. These cancellations created a movement in the market that Sarao could predict and profit off of.

Sarao’s spoofing amounted to over $200 million worth of trades being canceled or changed. The CFTC (Commodity Futures Trading Commission) considers Sarao the match that lit the forest fire. He didn’t cause the entire crash but contributed by causing other large, algorithmic traders to sell and eventually cause the “Flash Crash” of 2010. Sarao, who suffers from severe Asperger’s, only received one year of supervised release for his crimes. His attorneys argue that money was never a motivation for his trading. Rather, his fascination with the markets was stems from how he viewed it as a “sophisticated video game”. In many investing communities, the name Navinder Singh Sarao will never be forgotten for his brief, but severe impact on the market.

This week displayed some promising gains as earnings season kicked off on a high note. Oil’s rise from a negative $40 a barrel to over $80 is something to admire. In 2010, for 36 minutes, the world markets lost over $1 trillion, primarily due to the actions of one man: Navinder Singh Sarao.