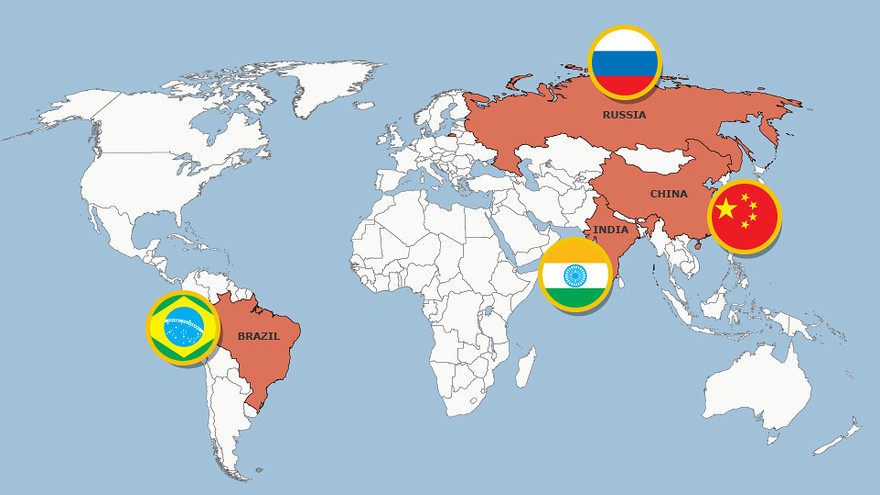 “BRICs” is an acronym that refers to four of the most economically important emerging markets: Brazil, Russia, India, and China. The acronym sometimes includes a capital “S” (“BRICS”) to include South Africa. Together, the BRICs account for over 40 percent of the world’s population. For comparison, the United States and Europe make up around 14 percent combined.

Origin of the Name

The term BRICs was coined in 2001 by Goldman Sachs, a bank. The financial institution projected that over the coming decade, the BRICs would rapidly become an integral part of the global economy. A second report estimated that by 2041, the BRICs’ economies would be larger than the six largest Western economies. (The year was later amended to 2032.) The bank suggested that the BRICs offered an attractive opportunity for multinational firms to expand internationally and for individual investors to earn high returns on their investments.

The prediction has proven to be largely accurate. Since 2001, the BRICs’ share of global GDP has grown from 8 percent to nearly 22 percent. Growth among the BRICs has been distributed unevenly, though. While China and India have grown at a faster than expected pace, the natural resource-based economies of Brazil and Russia have floundered. Russia faced a financial crisis from 2014-2017, and in 2016, Brazil had its worst recession in history.

GDP, short for “Gross Domestic Product”, is a value which represents the size of a country’s economy. GDP is calculated by adding together all goods and services produced within a country’s borders in a specific time period. USA has the world’s largest GDP at just over $20 trillion dollars in 2018. For comparison, that same year, China had a GDP of $13.5 trillion and India had a GDP of $2.7 trillion.

The BRICs held their first summit in 2009 and created a formal grouping in 2010. Going forward, expect these countries to have ever more influence, not only on the global economy, but over all foreign policy decisions made by the current established powers.