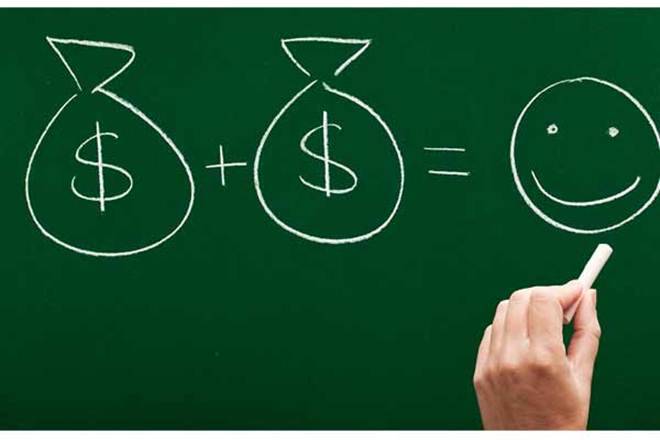 A well-known quote says that, “Money can’t buy happiness”. And though most people agree, most people also believe they would be happier if they were richer. So, is this famous quote wrong?

A Study in Happiness

In 2010, Nobel-winning psychologist Daniel Kahneman and Princeton economist Sir Angus Deaton attempted to, once and for all, conclude whether “money buys happiness”. To determine the answer, Kahneman and Deaton used survey data from 2008 and 2009 which asked US residents several questions about their subjective well-being.

Their study distinguishes between two aspects of subjective well-being: emotional well-being and life evaluation. The former refers to, “the emotional quality of an individual’s everyday experience”. This consists of the frequency and intensity an individual experiences positive emotions (joy, affection, hope…) or negative emotions (stress, sadness, anger…). This was measured with a series of “yes or no” questions.

Life evaluation, on the other hand, refers to, “the thoughts that people have about their life when they think about it”. This was measured on a scale of 1-10.

The most famous finding is that money can actually buy happiness… to an extent. According to the study, emotional well-being rises as income rises up to an annual income of $75,000. Beyond $75k, there is no further progress. Life evaluation, however, continues to improve as income increases. Education can also help improve life evaluation.

Other strong predictors of emotional well-being include health, care giving, loneliness, and smoking. Meanwhile, low income exacerbates the emotional pain associated with negative life experiences such as divorce, poor health, and loneliness. In conclusion, high income “buys” life satisfaction, but not happiness, while low income is correlated with both low life evaluation and low emotional well-being.

Economics is a “social” science, not a “concrete” science, because it deals with humans, not with particles. Humans are far less predictable than particles. So, it is difficult to create hard-and-fast economic rules, especially for something as complex as human emotion.

Thus, although Kahneman and Deaton’s study is often cited, other studies have reached different conclusions. For example, research from Wharton’s Matthew Killingsworth found that both emotional well-being and life evaluation increase no matter how far up the income scale you go.

So, next time someone tells you money can’t buy happiness, you can tell them, “Well, it actually does. But it’s complicated…”