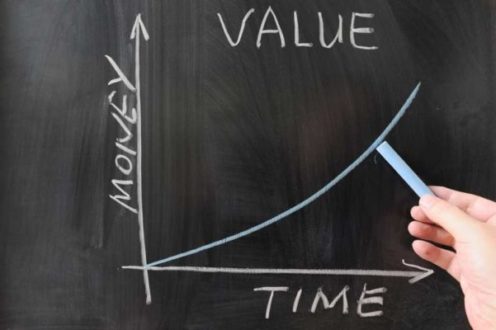 Time value of money graph drawn on the chalkboard with a hand holding a chalk
Share this:

There is no doubt that everyone has heard the saying that “time is money.”  More than something that your parents would say in a lecture to you about not wasting money they spent hours working for, this saying derives itself from the core idea in all of finance: the time value of money.  Simply said, the time value of money is the idea that an amount of money received earlier is worth more than that same amount of money received later. In other words, a dollar received today is worth more than a dollar received tomorrow.  Money received earlier is worth more because the sooner you have money, the sooner you can invest that money, and the longer your investment has to grow in value.

Where i is the interest rate in decimal form, n is the number of compounding periods per year, and t is the duration in years for the investment.

If the FV formula looks familiar, that’s because it is the same as the compound interest formula. In fact, the compound interest formula derives itself from the FV formula, and the only difference is that FV becomes amount (A) and PV becomes principal (P).  Principal refers to the initial amount of money put in an investment. Let’s look at some examples of how to use the time value of money, assuming only one compounding period per year (n = 1):

For the first example, you would use the FV formula, and just plug numbers into the formula:

For the second example, you would use the PV formula, which is just solving for PV from the FV formula.

Let’s say that someone wins a lottery worth $10M.  He has the option to take the $10M lump sum or through annuity with payments of $1M over ten years.  Which option is better?

After one year, the winner receives the second payment of $1M, and he puts that into the same investment he put his initial $1M in.  But, since one year has passed, the winner’s second $1M has 9, not 10, years to grow. The value of that $1M at the end of the remaining 9 years is $1M x (1.1)^9 ≈ 2,357,947.69, which is less than what the initial $1M would be worth at the end of the investment.  As the winner keeps getting his payments of $1M, he puts it into the same investment, but everytime he does, each $1M has less time to grow.  If you see the table below, at the end of ten years, your investment is worth about $18.5M.

While $18.5M is certainly a lot of money, let’s still take a look at the lump sum option.

If the winner took the $10M lump sum, he would have $10M to invest. For the sake of simplicity, this example will ignore the tax on the $10M.  Below is a table showing the value of the investment by year. With the lump sum option, the winner ends up with about $25.9M at the end of ten years.