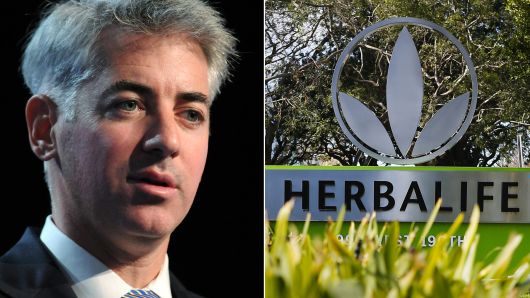 For 5 years, Bill Ackman, founder of Pershing Square Capital, was portrayed in the media as a crusader on a holy war to take down Herbalife. Herbalife, according to Ackman, was a pyramid scheme disguised as a nutritional products company which said it was a legal multilevel marketing company. Ackman accumulated a short position of about $1 Billion.

The Herbalife saga was also famous for the public feud between Carl Icahn, the founder of Icahn Enterprises, and Ackman. Both considered activist investors. Icahn took a 13% stake in Herbalife in 2013, which amounted to about $214 Million. He bolstered his stake to 21% in May 2018, according to the WSJ, making him Herbalife’s biggest shareholder. The feud’s height was an on-air public verbal brawl in which the two investing titans exchanged insults.

Five years later, it seems like the battle between the billionaires has ended, with Icahn appearing the victor, claiming he made about $1 Billion on the bet, and with Ackman losing about $760 Million on the short position. Many aspects of the Herbalife saga can be confusing, so for the remainder of the article, I will be explaining what exactly happened.

Media coverage surrounding Herbalife began when Bill Ackman announced he shorted about $1 Billion of Herbalife’s stock. What does that mean? A short is essentially a bet against something. Imagine there is a market for trading baseball cards. Let’s say you have a friend who has a baseball card that is currently valued at $20 on the market. You think that the baseball card is truly worth $10, half its current value. Believing this, you go to your friend and strike an agreement with him. You will borrow his baseball card and return it to him in a certain period of time. If your friend agrees, and you get to borrow his $20 baseball card, then you can sell that card immediately on the market for $20.

If you’re right, and the baseball card falls to $10, then you can buy that card back for $10 and return it to your friend because that was the agreement. You pocket $10 because you sold the card for $20 and bought it back for $10. You profited from the drop in the value of something. Your friend doesn’t receive $20, as that wasn’t the agreement. He only receives the baseball card he lent you. Now, you’re probably no longer friends with him.

Now imagine this with hundreds of baseball cards, perhaps a 100,000 cards. If you were right, then you borrowed and sold 100,000 cards for $20 each, totaling $2,000,000, on the market. You then buy all 100,000 cards back after they fall in value to $10 to give back to your lenders for $1,000,000 in total. Your total profit is $1,000,000. Now instead of baseball cards, apply this to stocks, bonds, and other financial markets. This is what Bill Ackman did with Herbalife. Sometimes, the lender will allow you to borrow his shares but may charge interest on the amount you borrowed. This is often done to ensure that the lender makes some money if the borrower was successful at shorting.

There are other ways to short stocks too with put options, credit default swaps, etc.

Shorting represents negative sentiment about a certain stock or bond or other types of investment. The larger the dollar value of the bets against a company, the more negative sentiment around the company exists. Herbalife’s stock fell when Ackman started shorting it and moved drastically when claims were made about its integrity.

The feud, as mentioned before, escalated when billionaire Carl Icahn took a stake in Herbalife. The market reacted to the news very positively, as Herbalife’s stock shot up like a rocket after Icahn’s investment was announced. Believing Herbalife was a sound business and wanting to short squeeze Bill Ackman were some of the reasons why Icahn invested in Herbalife when he did. What is a short squeeze, though?

That is what Icahn attempted to do to get Ackman to exit his short position and profit even more from those who joined Ackman in shorting the stock.

According to the SEC, in a pyramid scheme, participants make money by recruiting new members and usually doing one of 3 things:

The amount of people in each level of the pyramid grows at a near-exponential rate oftentimes. The transfer of money in the scheme works like this: new members pay to become part of what the pyramid scheme is selling, often the idea of getting rich quickly, and their payment is used to pay off people in their upper level. Those in the upper level want to recruit as many new members. They get more money if they recruit more members and get their payments.

The payments trickle up so that the person at the top of the pyramid makes the most. Those beneath him make the 2nd most, and those beneath them get the 3rd most, and so and so forth until you arrive at the bottom level whose members make the least. The more members that are recruited and the more levels that are added to the pyramid’s bottom, the greater the probability there is that the pyramid scheme will fail. After all, there are only so many people who are interested in what the scheme’s promise is. There’s a saturation limit on all pyramid schemes. The few at the top of the pyramid make almost all the money being generated by the pyramid scheme.

With Herbalife, participants were called “distributors” who tried to recruit people for the “business opportunity” Herbalife offered. Herbalife’s “business opportunity” involved recruiting new people to turn into distributors, and those new distributors recruit more people to turn into distributors, and so on and so forth. Each level, other than the very top ones, had an upline and a downline, referring to those in the levels above and below them, respectively. A distributor would ask potential recruits to become distributors by purchasing a certain amount of discounted product from the company, worth tens of thousands of dollars, to then sell at the retail price.

The more people you have in your downline, and the more people your recruits have in their downline, the greater the discount you can purchase products from the company for and sell for a retail profit due to the way Herbalife set it up. The incentive is to always keep recruiting and expanding your downline. This worked out fine for those at the top, getting the most discount and being able to competitively set their retail price while still turning a profit.

For those at the lower levels, the discount wasn’t as high, which forced them to sell the product at a premium compared to similar products, which just ended up in a loss for the distributors at that level. This was one of the reasons why there was a lot of turnover in the lower levels as those who were unable to sell their product or recruit more people ultimately left Herbalife. The life of a pyramid scheme depends on how many people they can keep recruiting at the bottom levels.

The recruiting distributor, called the sponsor, gets paid a commission for each member in his or her downline. It’s not just the people directly in the level below them, but people in every level created by the people directly below them. As more people sign up to be distributors and start making purchases from the company, commissions begin to pile up. That is what made the “business opportunity” seem so profitable (and shady). The commission was solely based on the revenues generated by the recruitment, not by the sale of the actual products Herbalife was creating, such as dietary supplements, weight management, sports nutrition, and personal-care products. The top Herbalife’s distributors were often labeled as a certain team. The top team was the President’s Club. They received a bonus that was taken from a certain percentage of the annual revenue at Herbalife’s annual gala event.

With the complex structure for compensation, one wonders if Herbalife indeed was a pyramid scheme. In certainly seems as though something shady was going on because the FTC fined them $200 Million and asked them to “fundamentally restructure” their business model in a settlement. Prior to that fine though, Herbalife fought back against claims it was a pyramid scheme by saying it was a legal multilevel marketing (MLM) company.

There are many similarities between a pyramid scheme and a legal MLM. Both rely on a continuous cycle of recruitment. Both offer the opportunity to make money by becoming a distributor with downlines. The difference is in how each operates. A pyramid scheme is designed solely to move money up the pyramid and use you to recruit others. MLMs are designed as a marketing strategy to create demand for an actual product or service and rewards commission based on the products sold, not the recruitment of others. MLMs also allow you to make more money than the person above you. There is also the presence of comprehensive training and support for the distributors in an MLM. In a pyramid scheme, money goes up the levels. In an MLM, value transfers down and is present at every level of the distributor hierarchy.

Overall, an MLM presents a clear, trustworthy, accurate image of the distributor’s opportunity and sells a real product. A pyramid scheme ultimately presents the opportunity with false information and doesn’t sell a real product. Herbalife seems to have characteristics of both a legal MLM and a pyramid scheme. Only time, and regulators like the FTC, will be able to accurately judge them.