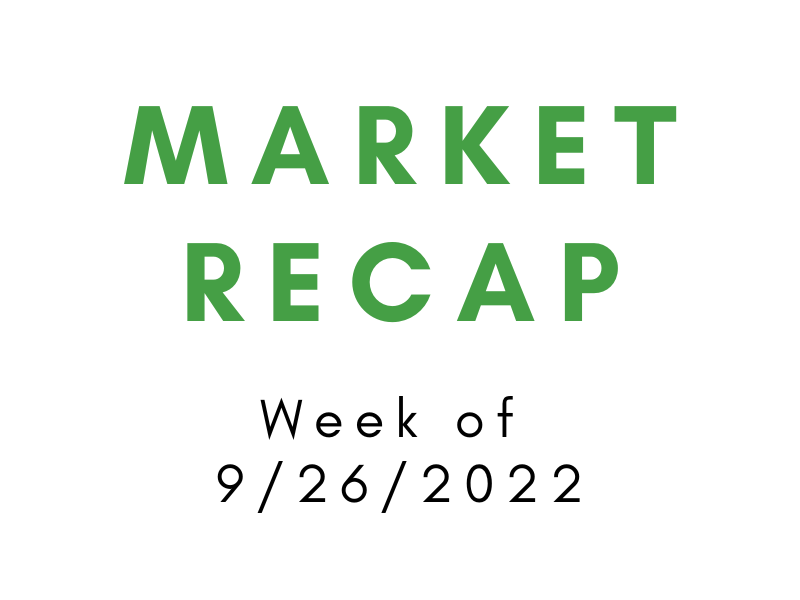 This past week in markets summarized in three short headlines.

The major U.S. stock indexes fell again this week, now declining for the 6th time in the last 7 weeks. On Monday, the Dow Jones joined the S&P 500 and NASDAQ in a bear market, as all three indexes are now down 20% from their respective highs. In more unfortunate news for bullish investors, Treasury yields continue to rise as inflation surges. The yield rate surged to 3.99%, the highest it’s been in 14 years and more than double what it was only a few months ago. The market’s summer downturn has extended through September, as the Dow and S&P 500 declined around 9% and the NASDAQ more than 10% this month.

Amidst rising inflation and a reduction in consumer spending, analysts have further cut back their estimates for third-quarter earnings results, representing a loss of confidence in the market and the economy’s future success. If you’ve ever watched College Football, you’ve seen how dominant Alabama is. They are virtually unstoppable, like inflation is now seeming for many on Wall Street. Despite the Federal Reserve’s best efforts to slow down inflation, inflation metrics like the PCE continue to show increasing inflation. Additionally, consumer prices rose 4.9% in August, not a pleasant sight for shoppers as items at their favorite stores keep increasing in price.

Around the world, US Treasury Bonds are considered one of the safest investments possible. The only possible way you wouldn’t get your money back was if the US government would default, a worst-case scenario that has never happened in its history. There is over $24 trillion in US Treasury Bonds held by everyday investors, and a potential default would wreak havoc on the world economy. Because of the bloodbath a US default would incur on the market, a default will likely never happen.

Though the current bond yields are close to 4%, consumer inflation is at 8.3% annually. Investors that buy these bonds are either confident the Fed will slow down inflation or are willing to lose their money’s worth in exchange for an extremely safe asset. Judging from this viewpoint, the rise of the bond yield isn’t as significant as some investors perceive it to be. Artificial demand for these bonds is being created as investors are willing to lose potential buying power for financial safety.

3. Robots Taking Over The World

Sci-fi often imagines robots taking over the world and leading to human destruction. Though that particular scenario doesn’t seem like it’ll happen anytime soon, robots have been taking over human jobs. In industries like manufacturing and textile production, robots can do human jobs cheaper, faster, and more accurately. While this rise of robots will cause economic growth and increased productivity, tens of millions of jobs will be lost especially in low-income countries. This will reinforce income inequality and wealth divisions between developed and developing countries, worrying some analysts.

By 2030, some predictions show that more than 1.5 million jobs will have been lost to robots in the United States. Overseas in China, by the year 2030, 11 million jobs are expected to have been lost. Though this scenario results in unemployment for many individuals, many researchers aren’t advocating for anti-automation laws. Hindering automation would limit technological advancement and put a cap in economic growth. Workers may just have to learn to find their particular niche in manufacturing between the finished product and the robots.

Markets are down for the 6th week out of the past 7. Treasury Bonds are now becoming even more popular with investors looking to place their money in a safe asset. With technology improving, robots are set to take over many jobs in the future.