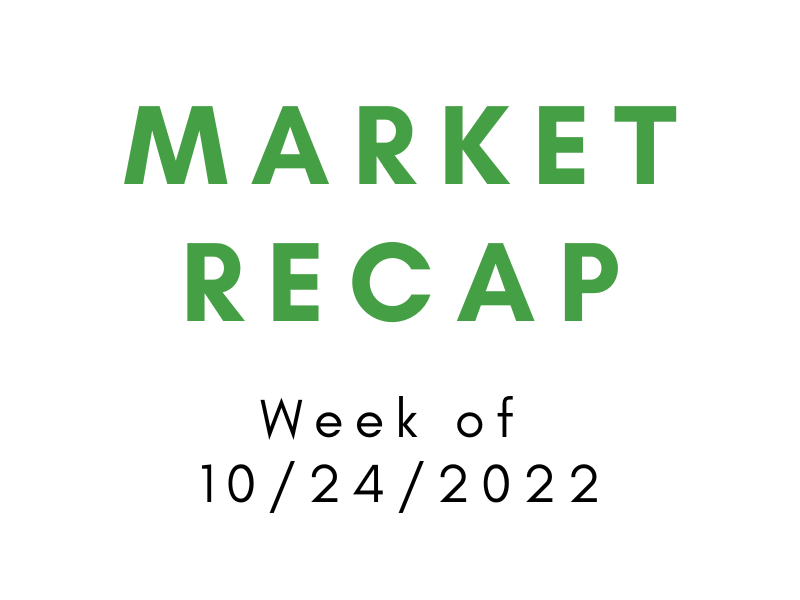 In a turnaround week, all three major U.S indexes recorded solid gains for the second week in a row, with the Dow Jones greatly outperforming its peers. The NASDAQ rose 2.2%, the S&P 500 secured a 4.0% gain, and the Dow Jones skyrocketed up 5.7% on the week. Mixed earning results from major tech companies hampered the growth of the NASDAQ, increasing significantly less than its peers.

Yield rates decreased this week as well, signaling that fewer investors took their money out of the market and bought safer, more protected government bonds. Looking at the earnings reports, the profit margins of major companies (except those in the Energy sector) were at 12%, marking the fifth consecutive quarter of declining profit margins for major companies. On the other hand, the US GDP recorded a positive gain this quarter, good news for investors as the past two quarters saw the GDP decline slightly.

With the recent surge in interest rates, mortgages have been costly and housing sales have decreased. Statistics show that the number of pending home sales is down 10.2%, far greater than the 4% that analysts expected. This figure essentially represents that housing market activity has decreased.

After bad earnings reports from major tech companies across the board, including Amazon, Meta, Alphabet, and Microsoft, the logical move for the market would be to sell off. In a startling turn of events, the market head faked investors and turned positive. The move up for the market wasn’t due to the negative earnings results. Instead, it was due to increased cash flow, expectations for midterm elections, and the growing belief that the Fed might become less hawkish.

This peculiar market movement after a negative move isn’t the first time this year something similar occurred. After the Fed announced increased interest rates and Powell condemned inflation, the market rebounded as well. The Federal Reserve can’t be happy about the market’s increase this week, as increased cash flow and spending will only result in increased inflation.

At this point, it’s difficult for the Fed to be correct in its actions. If they don’t increase interest rates, they’re leaving inflation virtually unchecked. If they do increase the interest rates, the market might rebound again like it did this week, further increasing inflation. Either way, Powell and the rest of the Fed have difficult decisions in the next few weeks to prevent inflation from further increasing the prices of products around the country.’

As the holiday season approaches, customers will find ridiculous deals in stores that seem too good to be true. Costco’s $4.99 rotisserie chicken is a great example of one of these absurd deals. These deals are known as “loss-leaders”, or products that cost the company money to sell but bring in many customers to their stores.

Another great example of a loss leader is HP’s printers. Marked down nearly 50% last year, the company took a loss on each printer sold. However, each printer requires ink to print, and if you’ve ever had to refill the ink in a printer, it’s extremely expensive. High margins on printer ink more than make up for the loss HP took on each printer sold, resulting in their bottom line not being hurt at all.

Possibly the most famous example of a loss leader is the Playstation. Historically, Play Stations have cost Sony more money to produce than they sold the products for, despite their high-price tag at retail stores. However, to play your favorite video game on the console, you have to buy the disc for it. The console is useless without the discs, and Sony takes full advantage of that. Overall, loss-leaders are great ways to bring customers into your store and increase spending on other items which generate a great deal of profit.

The market notched positive gains this week all-around, despite less than optimal earnings results. In fact, these results would normally result in a sell-off, but the market embraced spooky time and moved up. Loss-leaders are items sold that result in a loss for the company but have still led to profits.