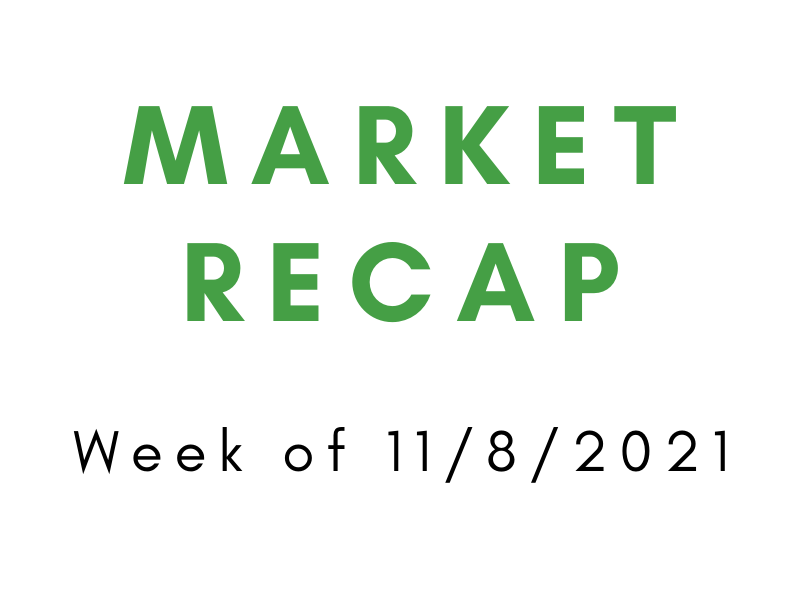 All three major indexes fell less than 1% as investors’ streak of 5 positive weeks in a row was snapped. After setting record highs last week, concerns over recent inflation trends weighed on the minds of investors.  The monthly measure of U.S. consumer prices climbed to multi-decade highs, with prices climbing 6.2% to the highest level they’ve been since Michael Jordan won his first NBA title. These concerns alongside further inflation concerns have shaken many investors’ confidence and have caused a sharp decline in consumer confidence. An increase in yield rates to 1.58% on Friday didn’t help the market stay positive either.

Though inflation rising is bad news for investors, those who invested in gold were very pleased with this latest week. Inflation concerns provided a catalyst for the price of gold to rise to the highest level it’s been in nearly 5 months. Bitcoin, another proposed inflation hedge, swung to a peak of $68,000 and a closing price nearly $6,000 below that. Overall, with inflation concerns at a high, the retail sales report reported on Tuesday will likely be watched very closely by investors. Considering the holiday shopping session is quickly approaching, this report might hold significant sway over investors come Tuesday.

Inflation, at its core, is a very simple topic to understand. It means the purchasing power of a currency decreases over time. In other words, the price of everything goes up. Inflation, at a slow rate of around 2% is nothing to worry about. It’s a sign of a healthy economy and growth rate. However, when inflation stops being consistently small and increases to greater amounts, investors begin to bite their nails and worry. If you’ve heard about inflation on the news, it’s likely because consumer prices have skyrocketed by 6.2% percent this year.

If this rate continues, consumers will expect prices to increase and buy more goods now, increasing demand. This increased demand will increase the price and the cycle will repeat. But what is to blame for this unprecedented inflation? The answer is relatively simple: the pandemic. The pandemic first reduced spending to extremely low rates but when the economy shot up again, so did inflation. With Biden’s $1.9 trillion stimulus, Americans began spending, shopping, and buying goods again. Demand skyrocketed but supply couldn’t keep up. This led to supply bottlenecks and prices increasing all over the board. This inflation has caused the Fed to plan tightening monetary policy by dialing back stimulus and raising interest rates, essentially slowing down borrowing, which slows down the economy, which ultimately lowers inflation.

3. Meta, the Metaverse, and the Future

You’ve probably heard by now that Facebook officially changed its name to Meta. Its CEO, the controversial Mark Zuckerberg, told investors that their “brand is so tightly linked to one product it couldn’t represent what they were doing today or the future”. The name “Meta” was chosen to represent the product Zuckerberg wishes his company will be based around: the metaverse.

The metaverse is an incredibly hot topic as its fundamental concept is revolutionary. It’s essentially a virtual space that users can access through virtual reality and due to its 3D nature, allow users to attend concerts, parties, or be in the living room of their friend’s apartment. The full implementation of the product won’t happen for many years, but the concept is already capturing the minds of people around the globe.

The name change for Facebook also takes away from the negative press it’s been receiving lately. From accusations of being a monopoly to not caring about consumer privacy, the name change to Meta and what it signifies might be what Facebook needs to put its past where it belongs: in the past.

All indexes fell this week after inflation concerns weighed down upon investors. Inflation has been in the news lately due to its rapid growth. Facebook recently changed its name to Meta based around the unique Metaverse concept.