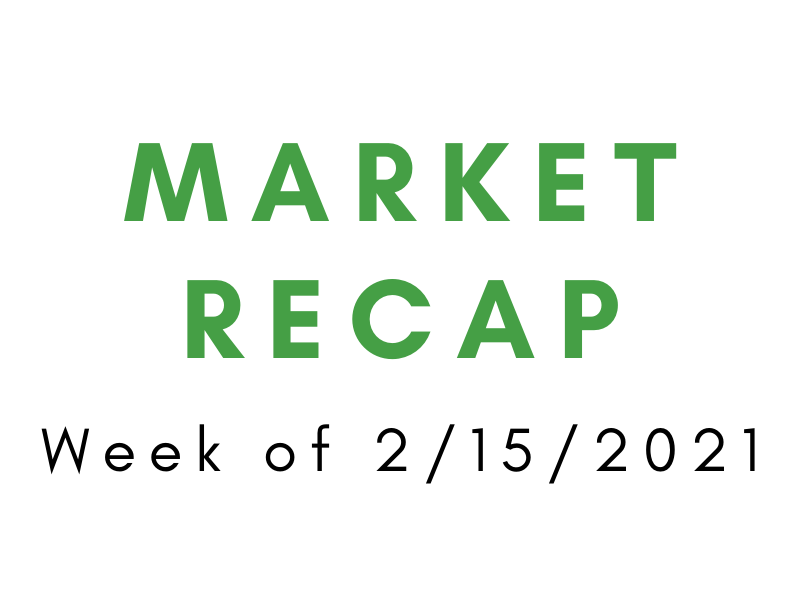 This past week in the market was bland as the Dow recorded an insignificant gain of 0.11% while the S&P 500 and Nasdaq displayed losses of 0.71% and 1.57% respectively. Investors believed that Biden’s environmental policy would garner support for renewable energy, so the energy and financial sector of the market soared while stocks in the healthcare and utilities sector fell. Overall, in the last 11 months, the market has risen around 74% since the lows caused by the pandemic. With a strong recovery, high expectations for the future, and the uprising of the Wall Street Bets community, the market might become responsive to a possible Fed Stimulus reduction in a bearish way.

Inflation rates are rising. In fact, they have nearly risen 100% since the lows of last year, this is likely not a problem. This increase is probably a result of the price drop that happened during COVID as demand for goods and services plummeted. This rise in inflation could be a signal of upcoming boost in economic activity and spending picks up. This rising inflation caused a sharp increase in interest rates, which could lead to high volatility for stocks in the weeks to come. On Tuesday, February 23rd, Chairman Powell will testify in front of several congressional panels. Many investors believe his testimony might reveal the Fed’s upcoming actions and will likely have a large impact in the week to come.

This past week, the daily 7-day average in the United States was 77,385 new cases, a decline of around 25% from last week. The highest the 7-day average has ever been was on January 8th, 2021, with an astounding 314,972 new cases. Though this descent from the highs is promising, the daily average is still considerably higher than the highest totals from the first two spikes in cases. The CDC reports 57.7 million vaccines have been given around the country, less than the predicted rollout of the vaccine. Also this week, the CDC published two reports about variants of the virus (variants B.1.17 and B.1.351) showing the destructive nature they could cause.

3. The Rise of Bitcoin

In just the last week, the price of a Bitcoin has increased $7000 per coin, resulting in a gain of around 20%. Many believe its rise has likely cemented its place in the world as a bonafide currency that will only become adopted by more and more people. Many are incredulous of the ridiculous gains Bitcoin has made, but several reasons might explain its unreal growth.

First off, as a bet against rising inflation rates, many large investment firms are scooping up Bitcoin due to its limited supply of 21 million Bitcoin. The total amount of Bitcoin that will ever be in circulation is fixed, meaning that more of it cannot be made and is less likely to decrease in price due to inflation.  Secondly, average investors have begun to buy Bitcoin more frequently as services like Etoro, Coinbase, and PayPal allow more people to have access to cryptocurrency. According to analysts, one of the most frequent ways a person might spend their stimulus check will be on Bitcoin.

Another reason for the rise of Bitcoin price is the US dollar’s decline. In the past year, it lost around 5% of its value on average, leading investors to place their money in Bitcoin, which many compare to digital gold. The adoption of Bitcoin, as well as the general belief about Bitcoin’s value in the future, has led to its unbelievable rise in the last months. Just recently, Elon Musk announced a $1.5 billion purchase of Bitcoin by Tesla, sparking another spike in price for the cryptocurrency. Overall, many investors don’t know if Bitcoin will repeat its 2017 crash, but a growing number of larger and more famous investors and members of the media are starting to believe that Bitcoin has a very promising future.