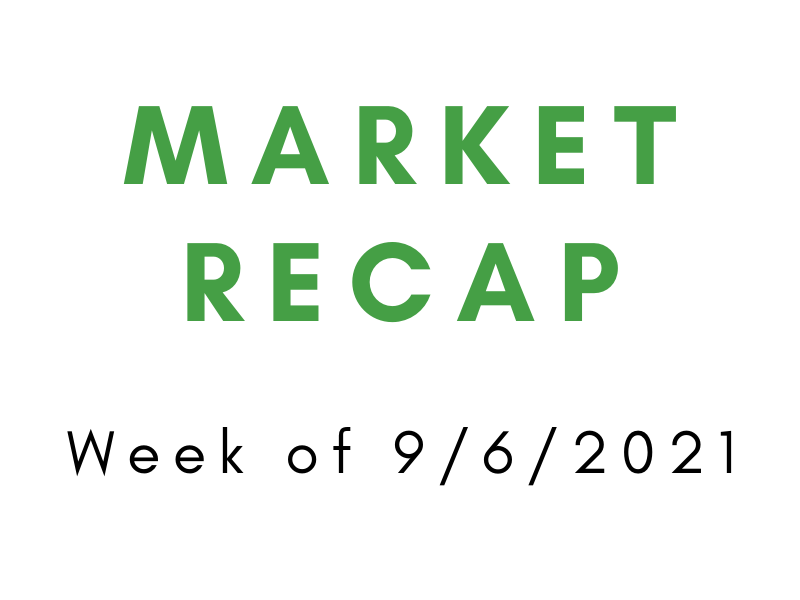 The market took a step back this week as investors modestly retreated. All three major indexes fell on Friday to end the week in the red. The S&P 500 and NASDAQ both fell around 1.5% while the Dow dropped slightly more than 2%. The US Government reported that the US had a record 10.9 million new job openings in the latest month, exceeding the 8.7 million Americans who are unemployed and seeking a job.

The Russell 2000 Index, an index encapsulating promising small-cap stocks, has stalled and now declined 6% from its yearly high of 20% in March. This symbolizes a larger trend in the market of small-cap stocks underperforming their large-cap peers. US wholesale prices show inflation increasing at a high rate, but at a lower increase rate than previous months.

Outside of the US, the European Central Bank, similar to our Federal Reserve, cut back on its stimulus program and plans to slow bond purchases. Like Djokovic getting beaten in three straight sets, so-called “growth stocks” have outperformed their “value stock” counterparts four the third week in a row.

Chief Investment Officer of Magellan Financial Group, Hamish Douglass, believes that the crypto crash is inevitable. Douglass, who is one of Australia’s most successful fund managers, cautions investors about the crypto market saying that Bitcoin will see its value go to zero. He believes that investors’ irrational behavior fuels the massive growth crypto coins have. Like Warren Buffett, he believes that all forms of cryptocurrencies that aren’t backed by assets or a central bank will go to zero. After all, “many have little intrinsic value”. Douglass believes that crypto’s cult-like following makes it one of the greatest irrationalities he’s ever seen. Crypto is in a bubble because “it has been inflated by people who get caught up in the hype rather than making a rational decision”. Though he doesn’t know exactly when the bubble will pop, he believes people in 20 years will look back and use crypto as a case study of irrationality.

El Salvador made history in the crypto community for being the first country ever to accept Bitcoin as legal tender. With Bitcoin as a national currency, El Salvador’s president became tech support for the country’s digital wallet Chivo as it started to malfunction. Many experts believe that Bitcoin as legal tender serves as a significant problem for El Salvador’s citizens and businesses. The volatility especially could be devastating for poor communities and businesses as in one moment Bitcoin could drop in price severely. For example, Bitcoin dropped from $52,000 to $42,000 in one day, nearly a 20% drop in value!

Critics of the government also warned that the lack of transparency in Bitcoin transactions could lend itself to the benefit of crime and increase the frequency of fraudulent activity. Bukele, El Salvador’s President, believes that the transition to Bitcoin will help many of his constituents easily transfer money back to the United States of America. To incentivize people to use Bitcoin, Bukele promised $30 worth of Bitcoin to users that downloaded Chivo.

The market took a step back this week as all three major indexes dropped. Government data shows the number of unemployed people pursuing a job is less than the total number of new job openings. Hamish Douglass, one of Australia’s most renowned fund managers believes that crypto is in a bubble held up by its “cult-like” followers. El Salvador became the first country to accept Bitcoin as legal tender.

Economic Effects of the Invasion of Ukraine